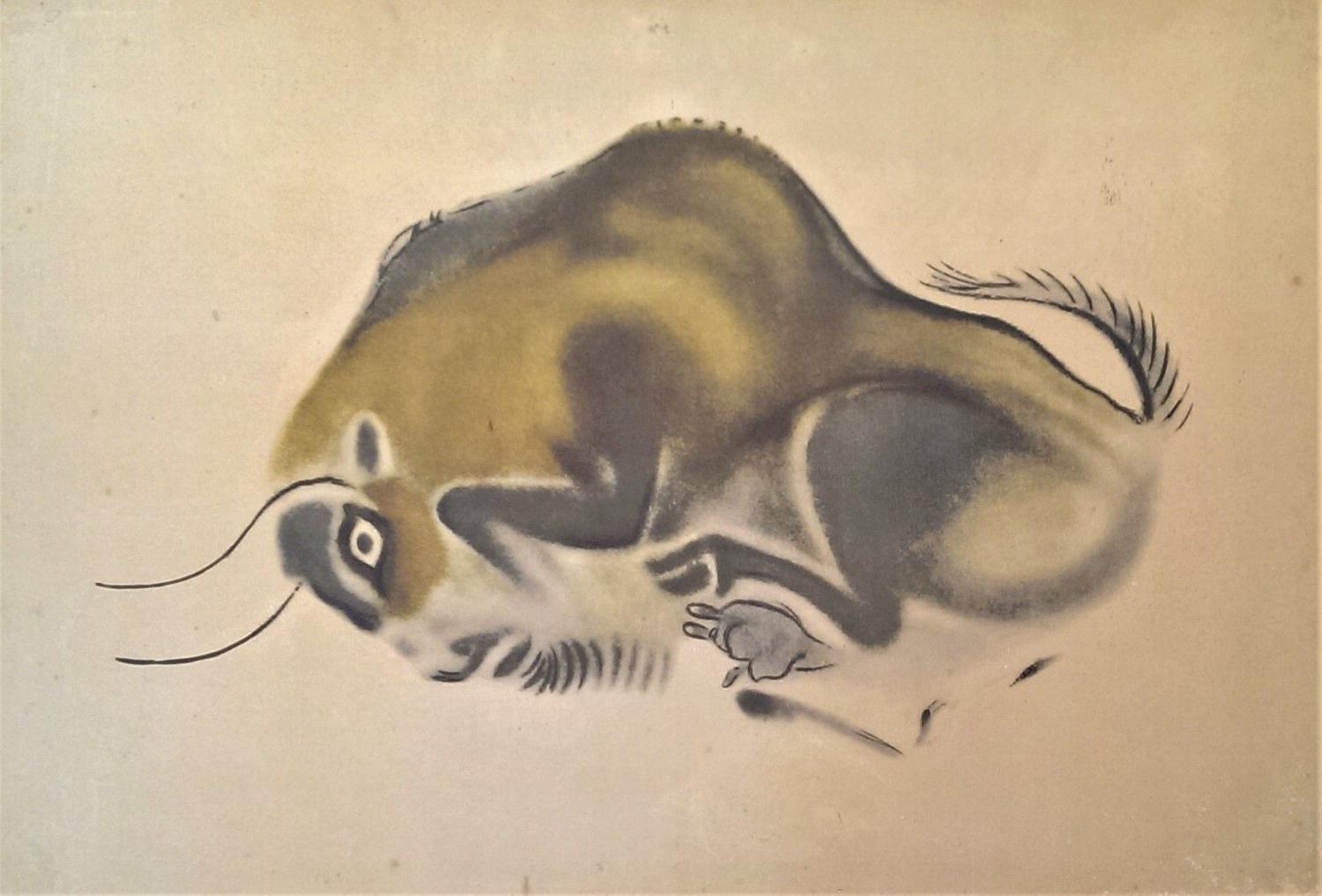 First discovered in 1868 and explored in the 1870’s, the caves at Altamira (which lie 30 kms west of Santander in Spain) were the earliest discovery of a prehistoric site decorated with Upper Paleolithic period artwork (between 14,000 and 20,000 years old). However, the discovery was initially scorned and the assertion that that the paintings were of great antiquity and belonged to some prehistoric people were dismissed by numerous scholars as a hoax. It was not until several decades later, when other similarly decorated caves were identified in other parts of Europe, that the claims were taken seriously. The pioneering cave art scholar Émile Cartailhac (1845-1921) (who was initially one of the foremost sceptics) finally became convinced that the Altamira caves were authentic and undertook to right the wrong done to the finders.

In 1902 Cartailhac visited Altamira along with the young prehistorian, priest and artist Henri Édouard Prosper Breuil (28 February 1877 – 14 August 1961). Breuil, as an abbot in the Jesuit order, is generally refered to as Abbé Breuil. The two men began crawling around the caves, lit only by candlelight, and started to measure, describe and make records of the images on what became known as the “Polychrome Ceiling” in the “Hall of Paintings”. The state of preservation of the original paintings, poor lighting and the difficult contorted conditions under which they could be viewed made photography unworkable. Making drawings of the images became the most practical way of documenting them. Breuil found that the watercolours he had brought failed to dry in the humidity of the caves (one of the reasons the pigments of the original images had survived for thousands of years). He therefore resorted to pastels – though found he had failed to bring any black and so had to make his own charcoal on the spot by burning twigs and corks. In his drawings, Brueil tried to convey the “spirit of the original” [1] rather than making exact facsimiles. As such Brueil’s pictures are works of art in their own right.

As Cartailhac and Breuil began to publish their ground-breaking findings, Altamira, along with other discoveries of ancient art, changed our understanding of our human forebears forever. Under the patronage of Prince Albert I of Monaco the magnificent volume “La caverne d'Altamira a Santillane près Santander (Espagne)” was published in 1906 in a run of 600 copies on large-format paper. The dissemination of this knowledge of pre-historic and primitive European art surely had a profound (but as yet underappreciated) influence on the immerging “modern” movement in art.  Three decades later Breuil updated and expanded his earlier work, taking advantage of increased access to the cave and newly available lighting. He redrew, updated and improved many of the images (especially those in which he found his ad hoc blacks were weak). The enlarged and expanded volume was published in Madrid in 1935, during the Spanish Second Republic (the relatively brief period of liberal Spanish democracy which immediately preceded the Spanish Civil War).

Possibly the most famous of the images which Breuil made of the Altamira artworks “Female Bison Curled Round” appeared as Plate XXVII in the 1935 book [Fig 1]. There are discrepancies between the chromolithograph here and the version published in the book: the eye is more distinct; the horns are slightly longer; the bison’s udders are rendered differently and the tail does not quite touch the bison’s back. The original painting in the Altamira Cave [Fig 2] measures around 155 cms across (the lithograph here is about half-size therefore) and could only be observed at an oblique angle whilst Breuil was lying on the cave floor. Breuil appears to have made different versions of the drawing as he interpreted his prehistoric forebear’s work.  This lithograph was probably made in the 1930's for a series of exhibitions organized to showcase Paleolithic art. An exhibition of Abbé Breuil's drawings of "Cave Art" was also held at the Arts Council's Gallery in St James's Square in 1954 and attracted some 15,000 visitors. In 1967 another variation of the "Female Bison Curled Round" image, probably also one made by Breuil, was used on a Spanish Peseta 1.20 commemorative postage-stamp. 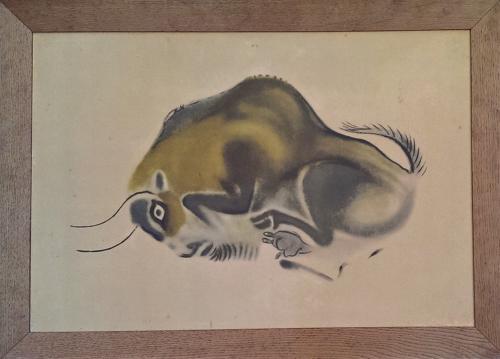 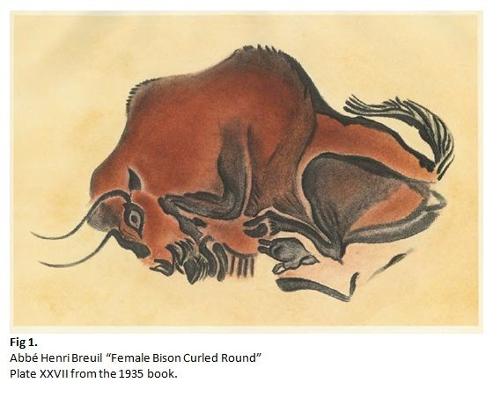 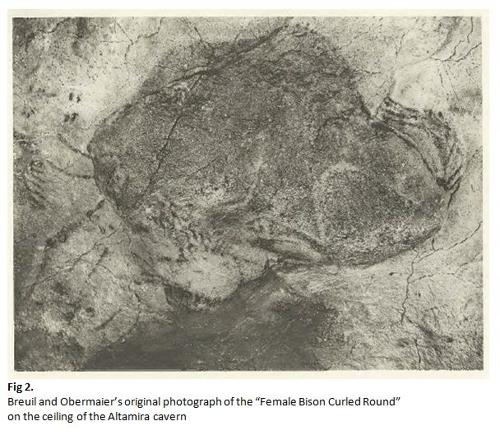