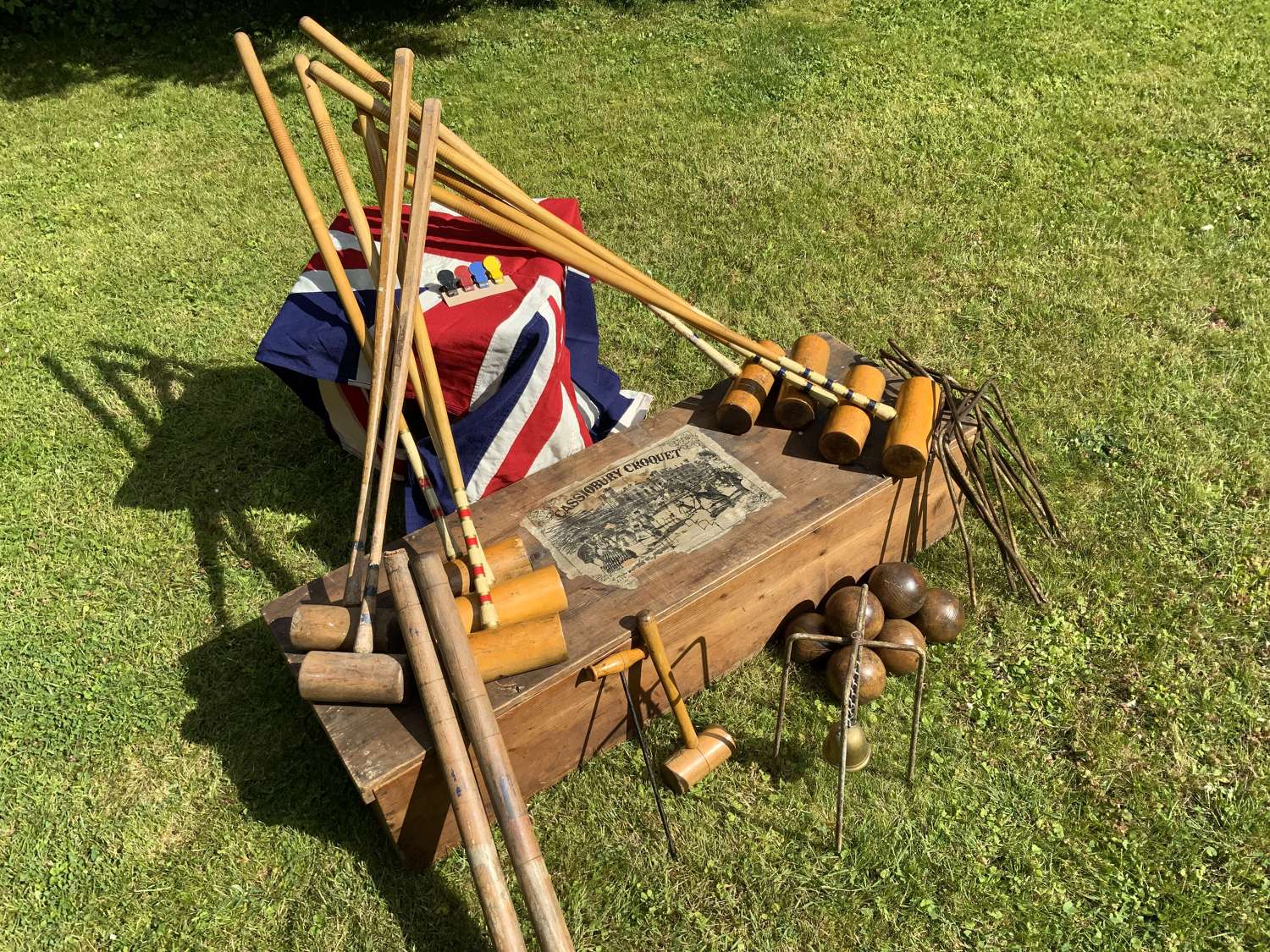 A very scarce, early and extensive croquet set, formed of nine mallets (two being for children) each stamped "Cassiobury Croquet" or "Cassiobury Mallet", eight lignum-vitae balls, two 'sticks' (for starting/turning/winning), nine 6½ inch wide x 14½ inch high hoops, a hoop drill, a hoop mallet, four coloured hoop clips, boundary markers etc. All contained within the original pitch pine box with its lithographed "Cassiobury Croquet" label to the top, depicting fashionable Victorian men and women playing croquet in front of Cassiobury House, Watford with motifs to the corners of the label with Earl's coronets and "SX" cypher beneath (i.e. the monogram of the "Earl of Essex"). Various shield-shaped retailers labels to the inside of the lid printed in gold on blue for John Piggott of Cheapside and Milk Street, London. Also included within is a rare Victorian double hoop (or "cage") with bell suspended from it, which means "Eglinton Croquet" can also be played with this set (see below).


Although various antecedents of the game of croquet had existed for centuries, "modern" croquet was introduced to England and Scotland from country houses in Ireland in the 1850's. With extensive Anglo-Irish connections Arthur Algernon Capell, 6th Earl of Essex (1803-1892), was an early convert to and promoter of the game (his second wife was daughter of Viscount Dungarvan, sister of the Earl of Cork and grandaughter of the Earl of Howth); the gardens of Cassiobury House, his stately home in Watford, Herfordshire, became one of places where croquet made its English debut. Lord Essex was a leading high-society socialite, famous for his lavish weekend country-house-parties which included champagne-lunches followed by games of croquet. It was at a weekend here that Lord Beaconsfield (the Prime Minister Benjamin Disraeli) witnessed his first game of croquet being played[1]. On another such weekend Edith Wharton arrived to find Arthur Balfour, Lady Desborough, Lady Elcho, John Singer Sargent, Henry James and many others from a "shining galaxy" all out on the lawns of Cassiobury House.[2]

By the 1860's, with no overarching consensus on the rules of the game, a number of variants of croquet had developed. In 1863 the Irish-born soldier, adventurer and novelist Captain Thomas Mayne Reid (1818-1883) endeavoured to codify the rules through his well-researched book "Croquet" (published simultaneously by Houlston & Wright in London and by James Redpath in Boston). Around the same time Lord Essex "being a croquet player and also a proprietor of timber"[3] instructed his estate's sawmills at the Cassiobury Timber Yard, which were run by Thomas Turner[4], to begin manufacturing croquet sets of the highest-quality. He aimed for these sets to be of a standard to surpass those being offered by the main rival sporting goods and garden-games manufacturers John Jaques of London and F. H. Ayres Ltd (Slazenger's Ltd was not founded by Ralph and Albert Slazenger until 1881). To ensure that the "Cassiobury Croquet" sets were as complete as possible, Lord Essex commissioned a rule-book to be included with them. This book was written by "An Old Hand" and published as "The Rules of Croquet, Revised and Corrected". Unfortunately, whoever the "Old Hand" was, they had largely plagiarized their text from Captain Mayne Reid's work. In 1864 the Captain demanded an explanation as to why his work had been copied without any reference to him. Having initially rejected the claim of plagiarism, Lord Essex was taken to court: the result was widely reported in the general press with headlines such as "The Game of Croquet - Literary Piracy"[5] and officially as Captain Mayne Reid v. The Earl of Essex and Miss Emily Faithfull (the latter being the extremely distinguished publisher and women's rights campaigner Emily Faithfull (1835–1895) who had innocently printed the book at "The Victoria Press" on behalf of the Earl). The resut of the judgement being that a publisher can still be responsible for an infringement, even if it is unwittingly so. Mayne Reid was awared his costs, £125 of compensation and all copies of the Cassiobury "Old Hand" rules were ordered to be withdrawn from circulation and destroyed.

Two of the early alternative versions of croquet are very strongly connected: "Cassiobury Croquet" (with nine hoops and two "sticks", laid out in a double-diamond formation which up to eight people could play at once (each with their own ball), either individually or in two teams) and "Eglinton Croquet", originating at Eglinton Castle (the seat of the Earl of Eglinton) (which had eight hoops, two "tunnels" (flat hoops to be passed through in one direction), two "posts"/"sticks" and a central "cage" (or double hoop), from which a bell was suspended which rang during the course of play when balls passed through).[6] Lord Essex's daugher, Adela Caroline Harriet Capell (1828-1860), had married the Earl of Eglinton in 1858 and so Lord Essex (as father-in-law to one Earl of Eglinton and step-grandfather to the two following) therefore forms the link between the Eglinton Castle and Cassiobury versions of the game. The "Rules of the Eglinton Castle and Cassiobury Croquet" were published in 1865 and it seems very likely that the novelty elements of the Eglinton game were developed as an amusing diversion for Lord Essex's young relatives. Certainly, the wooden implements supplied in the boxes for the Eglinton game were also made at the Cassiobury sawmills and marked as such.[7]

The craze for croquet burgeoned during the 1860's until no respectable property was without its "croquet lawn" and any estate agent's listing worth its salt had to mention a "croquet lawn" or "croquet ground" in the particulars. Indeed, the game became so fashionable that special "Croquet Suits" were marketed to men and "white alpaca Croquet Capes" for women.[8] As a reflection of the popularity of the game the "All England Croquet Club" was founded at Wimbledon in 1868. In 1874 a rival summer game called "Sphairistike" was invented, which became known as "Lawn Tennis"; in the following year a single croquet lawn at the All England Croquet Club was set aside for the newer game.  In April, 1877 the Club's name was changed to the "All England Croquet and Lawn Tennis Club" and before long the upstart game of tennis came to dominate. At one point during the next decade "Croquet" was actually dropped from the Club's title before, in 1899, it was finally restyled The All England Lawn Tennis and Croquet Club (the name by which it is still officially known to this day).

Croquet remained popular enough during the Belle Époque and Fin de siècle, for it to be included as a sport at the 1900 Olympics in Paris (the Games of the II Olympiad). It was amonst the first Olympic sports in which women were allowed to compete and one of a very few sports where women and men competed alongside one another on equal terms.

John Piggott & Co of Cheapside (founded by John Piggott (1847-1922)) were a leading City of London-based "general outfitter". The shop sold the paraphernalia required for many modern sports and pastimes. Their range included equipment required for photography and, later, they even stocked motoring items.

Though neither "Eglinton Castle" nor "Cassiobury" became dominant forms of the game they still, effectively, survive as Nine-Wicket Croquet, sometimes called "Backyard Croquet", a very popular form of the game in the U.S.A. and Canada. The death of the Earl of Essex in 1892 brought Cassiobury's heyday to an end. His grandson, who succeeded him to the Earldom, found that the upkeep of Cassiobury was excessively costly. The manufacture of "Cassiobury" branded croquet sets had probably already ceased well before this time. Cassiobury House was vacated by the Capell family at the begining of the 20th Century, some of the grounds becoming a public park. The mansion itself was finally demolished in 1927.

This fascinating set, dating to around 130 years ago, is a rare survival and contains a number of quirks - the most notable being that the early iron hoops are 6½ inches wide (modern regulations require a narrower width of between 3¾ and 4 inches). The additional hoops, balls and post allow "Cassiobury Croquet" to be played, also the requisite "cage" and bell allows for "Eglinton Croquet" but, of course, the set can also be used to play more conventional forms of Association Croquet and Golf Croquet (requiring only six hoops/wickets, one post and four balls).

Literature
A similar Cassiobury Croquet set from a private collection is illustrated and described on p. 34/35 of Simon Inglis, "Played in Britain: A Load of Old Balls", English Heritage, London, 2005

Anon, "Croquet, its implements and laws, drawn up by a committee of players appointed by the Editor of 'The Field'", Horace Cox, London, 1866 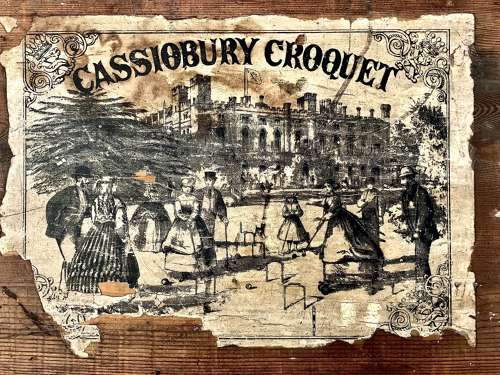 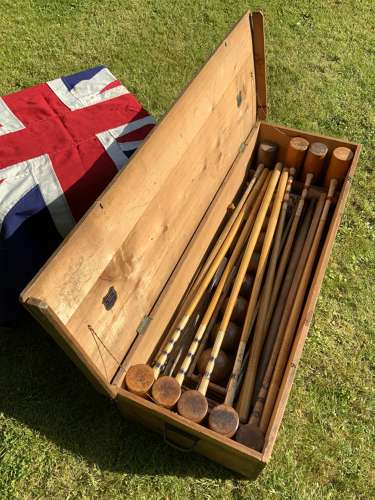 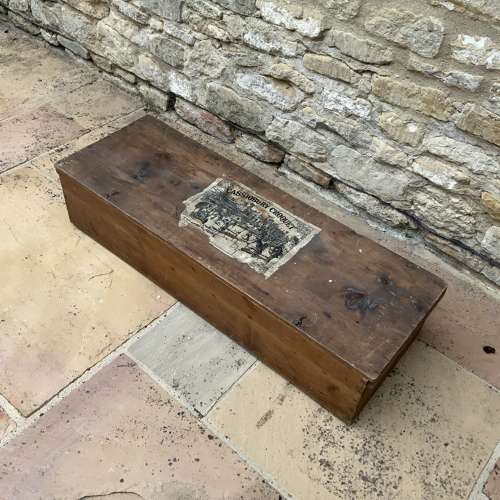 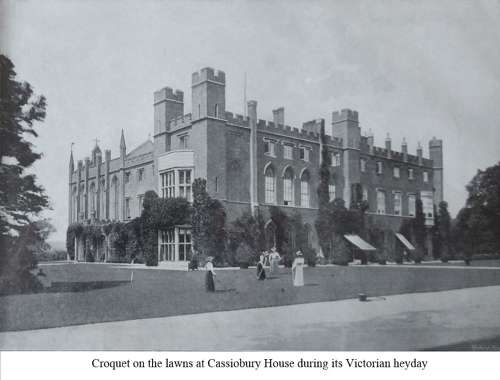 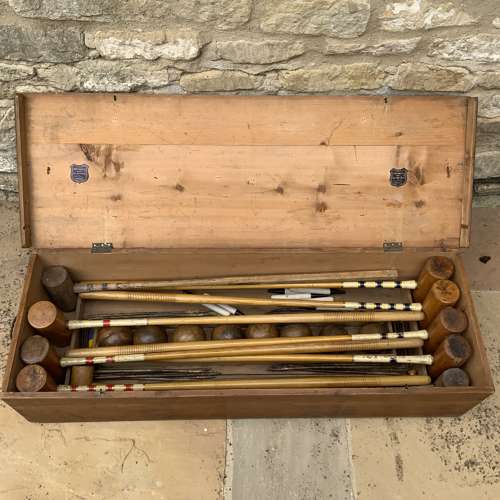 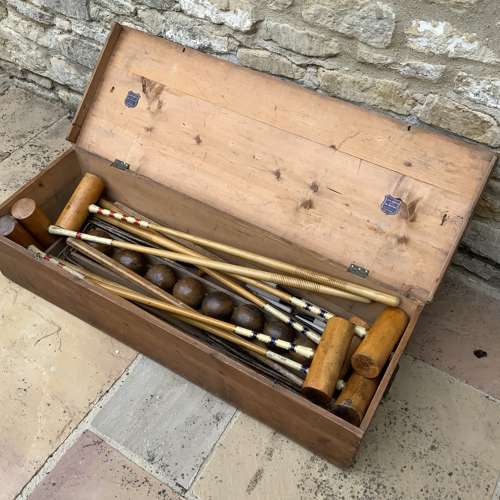 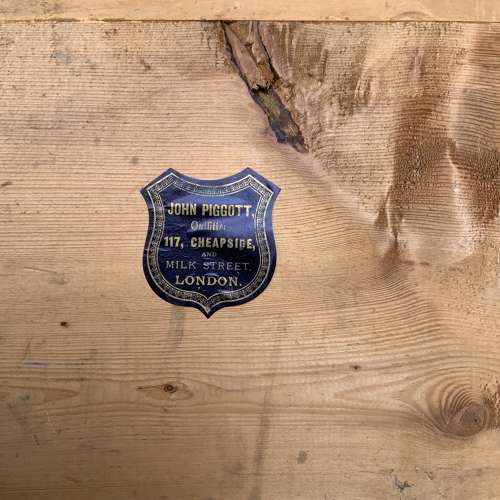 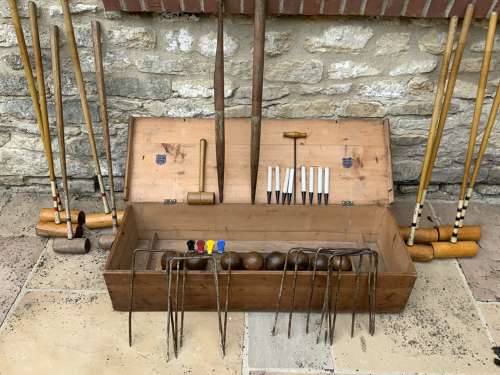 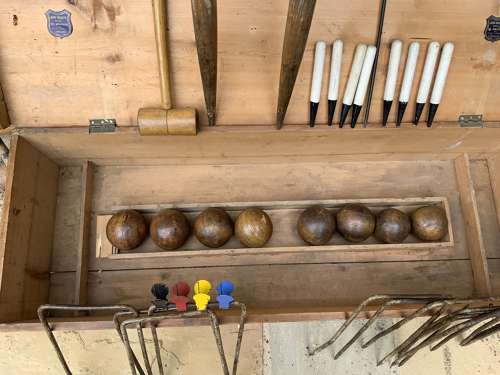 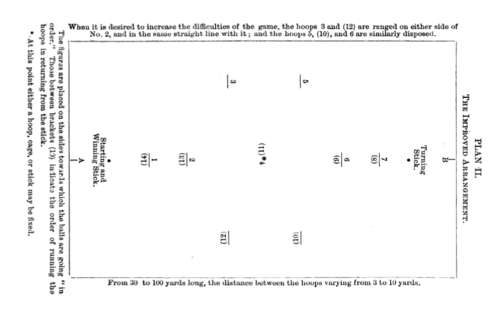