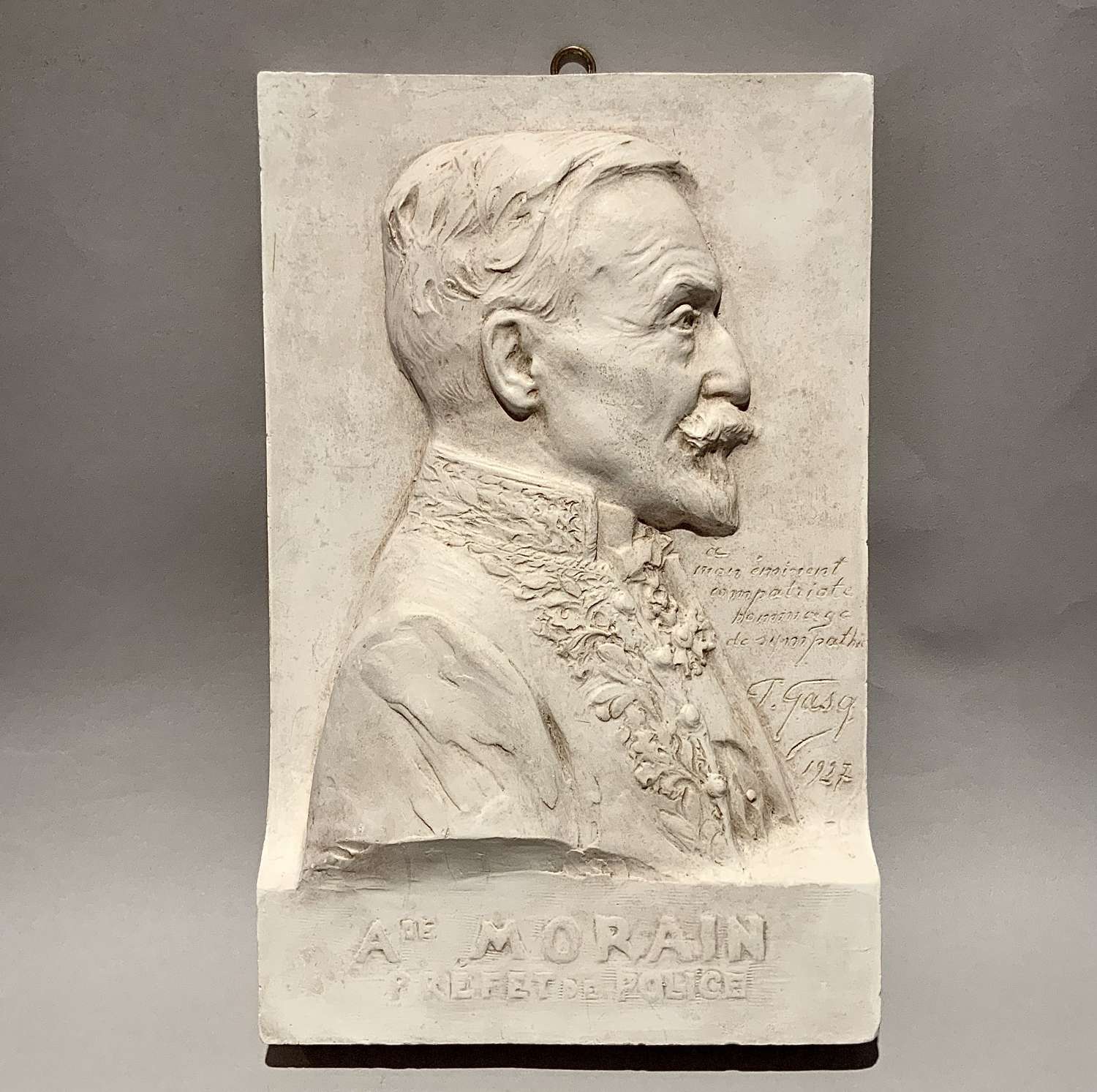 Fitted with an integral loop for suspension

A portrait plaque in plaster depicting Alfred Morain, préfet de police from 1924-1927 (préfet honoraire 1927-1928). The subject shown bust length, facing right, wearing ceremonial uniform with the ribbon and cross of the Légion d'honneur at his neck.

Benoît Alfred Morain (always known as Alfred) was the son of Alfred Jacques Morain, a successful lawyer who became the Mayor of Charolles. His mother, Marie Créput, was daughter of a silk dying pioneer from Lyon. His younger brother Charles Gabriel Morain (1868-1919) became the Mayor of Poitiers.

Morain was a career civil servant who began his public service in 1885 as secrétaire particulier to various cabinets de ministers. In April 1896 he became Chef du Secrétariat Particulier du Ministre de l'Intérieur. His first Préfeture was the department of l'Indre in central France in 1907. In his job he was closely associated with policing and was involved with many extraordinary cases, including the apprehension of the notorious “Bonnot Gang” (La Bande à Bonnot), the capture and detention of Jeanne Weber and the arrest and conviction of the serial killer Henri Désiré Landru. He was made a Chevalier of the Légion d'honneur 1912 and served as Directeur du Personnel au Ministère de l'Intérieur before accepting the major Préfeture of Seine-Inférieure in 1915 (four months into WWI). He was present at the trial and execution of Mata Hari and became Préfet of la Somme in 1918, in which roll he was responsible for vital security arrangements in the final months of the war and for overseeing much of the reconstruction of the department in the aftermath of the conflict. For this work he was elevated to an Officier of the Légion d'honneur in 1919. He was also an honorary foreign appointee as Commander of the British Empire. The pinnacle of his career was his appointment as Préfet de Police in August 1924 [Fig.1].

After his retirement he wrote a memoir entitled “The Underworld of Paris: Secrets of the Sûreté” (London: Jarrold, 1930). He was also commissaire general in charge of security at the celebrated “l'Exposition Coloniale Internationale" (the Paris Colonial Exhibition of 1931) which was visited by an estimated 9-million visitors from around the world.

The sculptor Paul Jean-Baptiste Gasq studied at École des Beaux-Arts in Dijon, before studying under François Jouffrey, Jean-Alexandre Falguière, Marius Mercié and Ernest-Eugène Hiolle at the École Nationale Supérieure des Beaux-Arts in Paris. He began exhibiting at the Salon in 1880 and won the Prix de Rome in 1890, holding a scholarship at the Villa Medici from 1891 to 1894. He was awarded the Grand Prix at the Exposition Universelle of 1900. In 1898 he was made a Chevalier of the Légion d'honneur and an Officier in 1921, he was also a Chevalier of the Order of Léopold of Belgium. He was appointed Professor of Modelling at the École Nationale Supérieure des Beaux-Arts in Paris in 1931, Conservateur of the Musée de Dijon from 1932 and was made a member of the Institut de France in 1935.

Gasq had a keen interest in sculpting classical and allegorical subjects and was also in demand from eminent and affluent sitters for commissions of portrait busts, medallions and bas reliefs. It is not known how Gasq knew Alfred Morain but the unusual personal inscription here, made in the wet plaster, suggests he was a man for whom the artist had much admiration. This sculpture is seemingly unique, no other version having been identified. The known iconography of Alfred Morain seems, until now, to have been limited to photographs. 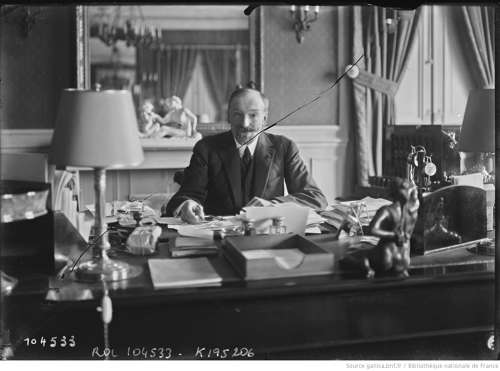