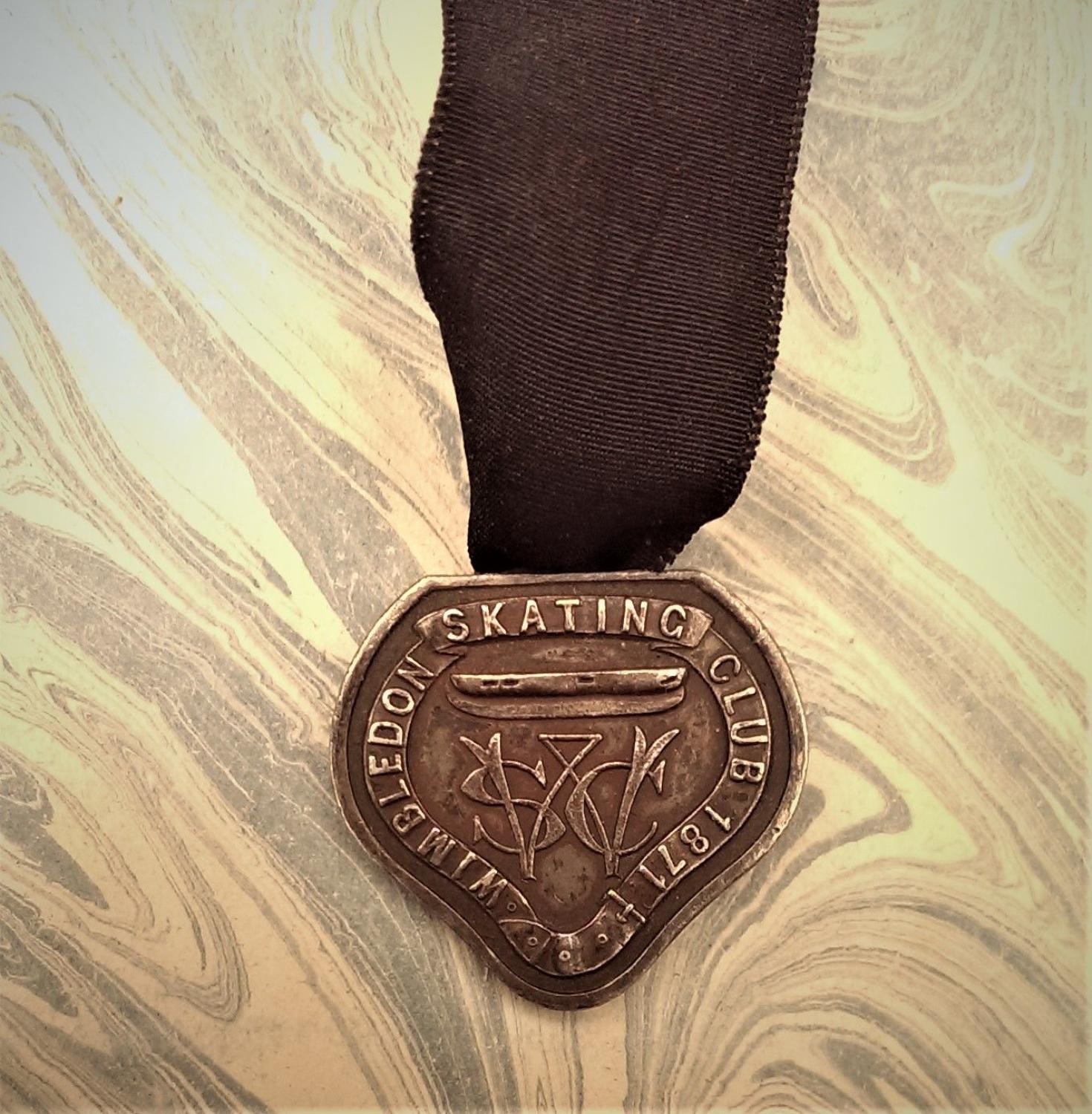 ACQUIRED BY THE MUSEUM OF WIMBLEDON

Badge in the form of a heart-shaped fob, cast in silver with an integral suspension loop. Obverse bearing a garter with the words "Wimbledon Skating Club, 1871" around an image of an ice skate with a "WSC" monogram beneath. The integral suspension loop bears a black ribbon within (original?). Reverse blank. Good, fine and exceptionally rare.

An exceptionally rare membership badge for the Wimbledon Skating Club. The club was founded in 1871 by Rev Dr Edward Huntingford D.C.L. (1820-1905) who was educted at Winchester and New College Oxford. Huntingford had lived for a while in Canada before returning to England and becoming headmaster of Eagle House School in Hammersmith. In 1860 he and his second wife Lydia (a daughter of Admiral Sir James A. Gordon, G.C.B. (1782-1869), the Governor of Greenwich Hospital) relocated the school to Wimbledon. Here they found a substantial 17th Century Jacobean house on the High Street in Wimbledon Village which had already been in use as a school, but was originally built for Robert Bell (one of the co-founders of the British East India Company). They transferred their school's name and brought with them a stone eagle which had been a feature of their previous property which was mounted on the central gable of the new home.

The Huntingfords became an active force in the social life and interests of Wimbledon, Putney and Roehampton. As often the case in the 19th Century, Huntingford was not only an academic and clergyman but also a keen sportsman: he fished, played cricket, boxed, and rowed (maintaining a passionate interest in the Boat Race, which he is said to have followed on horseback whenever possible). He also played the cello and musical soirées at Eagle House School were attended by performers as illustrious as Jenny Lind. He is described as having "won universal respect" for his "genial manner, his courtesy and tact" and "his practical experience of men and things".

The 1870's were an extremely important time for the establishment and codification of various sports. Although this formalization of sport is interesting, the growth of informal recreation is equally significant. The Wimbledon and Putney Commons Act, which was passed in August 1871, sought to formally set-aside and preserve a large area of land within these parishes which had already been used for the pursuit of various pastimes (such as golf, shooting and archery) for decades. Under the terms of the Act, Rev Dr Edward Huntingford became one of the very first Conservators of the Commons and is actually named and appointed as Clerk within the 1871 Act's text, as passed by Parliament.

In the same year as the Wimbledon and Putney Commons Act, Huntingford sought to formally establish skating on this space through the foundation of the Wimbledon Skating Club (of which he became the first President).  Having spent time in Canada it is possible he was more familiar with this pastime than many of his contemporaries; skating had been introduced to Canada by the British Army in the 1840's and the first covered rink in the world was built in Québec City in 1852.  The  Wimbledon Skating Club became one of only a handful of clubs which predated the foundation of Britain's National Skating Association in 1879 (Edinburgh 1740s, Glasgow 1830, London 1830, Southampton 1854 and Oxford & Cambridge Universities (dates disputed)). It is probable that Huntingford's new club was founded along the lines of Edinburgh Skating Club. It is also intersting to note that at least one of Rev Dr Huntingford's pupils at the Eagle House School in Wimbledon was to develop a life-long love of skating. Edward St Leger (1866-1941), later 6th Viscount Doneraile, attended Eagle House from 1876-1880 and went on to serve as President of Britain's National Skating Association from 1920-1941.1

It is most likely that, in the Club's earliest days, the two broad, shallow pools at either end of Wimbledon Common known as Kingsmere and Rushmere where used for skating; Rev Huntingford's Eagle House School was only a few 100 yards from Rushmere. The name born by another (now nearly vanished) pool of water on Putney Heath known as Curllng Pond also indicates that it too was set-aside for winter sports. However, it is certain that by the end of the 19th Century, the lake on nearby Wimbledon Park was also in use. It is tempting to imagine Rev Huntingford skating in the same pose as the famous image of "Rev Walker Skating", however, skating at Wimbledon was relatively limited: records indicate that between 1882 and 1885, there was only a single day when the ice was safe enough to skate upon. In "Figure- Skating, Simple and Combined" (published in 1892) we learn from the table of records compiled by Wimbledon Skating Club that they had an annual average of eighteen days skating over thirteen years which was viewed as being "far above their reasonable expectations, though probably falling short of their unreasonable hopes".2

Women seem to have been admitted to the club from an early stage (though only through family ties) but the cost of maintaining the ice probably limited membership to the very wealthy. It is not surprizing therefore that Member’s Badges for the Wimbledon Skating Club are rare. Up to 170 labourers are said to have been employed in preparing the ice during cold spells and the additional cost of clearing the surface during a heavy snowstorm was said to be £1/per minute.3 During one series of blizzards one-hundred men are said to have worked constantly for up to 12 days4 at keeping the ice clear. However, in a good year, opening up the ice to fee-paying non-members seems to have offered a commercial opportunity to the Wimbledon Skating Club's exclusive membership. An 1891 edition of The Golfer records that the members "pay a rental of £30 a year for the lake on the common and this year they have already made £10,000 out of this piece of frozen water"5 (supposedly, the profits were donated to charity). The immaculate quality of the ice maintained by Wimbledon Skating Club was reported as far away as Adelaide in Southern Australia:

"At present the most perfect sheet of ice within easy reach of town is at Wimbledon Park. An army of sweepers keep its surface literally perfect."6

In its time, Wimbledon Skating Club produced some of the finest English Style skaters and was the principal rival of The Skating Club (London) who, depending on the state of the ice, practiced on The Serpentine, Long Water and Round Pond in Hyde Park/Kensington Palace Gardens. By 1893 the Club had also begun playing ice hockey. As the decades progressed, skating was practiced more and more frequently on the various new indoor ice rinks. In 1929 the London Skating Club merged with Wimbledon and together they became known by an amalgamated title of The Skating Club, Wimbledon. In 1932, by Royal Degree at the command of King George V, it became The Royal Skating Club. The club still exists, based at Guildford Spectrum, and promotes the English Style of figure skating - no longer practiced anywhere else!

A single reference has been found to three "Classes" of membership (First, Second and Third) awarded by the Club and how depending on the skill demonstrated to judges by a skater in turning figures on the ice they were presented with a tiny silver medal with 1, 2 or 3 stars. Apparently up until 1895 only 29 persons (4 of who where women)) were within the "charmed circle" of 3-stars.7 Althought the form of this Wimbledon Skating Club badge conforms to the description of a "tiny silver medal", the absense of any stars, its overall design and appearance and the conspicuous date of "1871" suggests that it is one of the original pass/ticket/membership badges. It is likely to have been worn as a fob hanging at the waist or from a waistcoat pocket. Similar membership badges (known as medals) were worn by the members of the Edinburgh Skating Club. In that club's rules (as set out in 1865) any member not wearing their 'medal' whilst skating was liable to pay a fine of 2s. 6d to the Treasurer. We can only speculate whether a similar code existed for the early membership of the Wimbeldon Club. The Club's rules and a list of members was published in 1895 but this publication is so scarce that it has not been possible to access a copy.8 No other comparable Wimbledon Skating Club badge from any period has been indentified. The Surrey History Centre which holds the club's archives holds nothing similar.

8. A single copy of the 1895 "Rules and List of Members of Wibledon Skating Club" is held in the archives of McMaster University, Hamilton, Ontario, Canada. No copy appears to be held by the British Library.

ACQUIRED BY THE MUSEUM OF WIMBLEDON 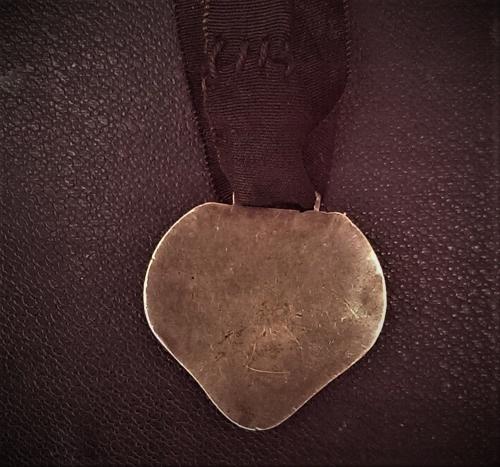