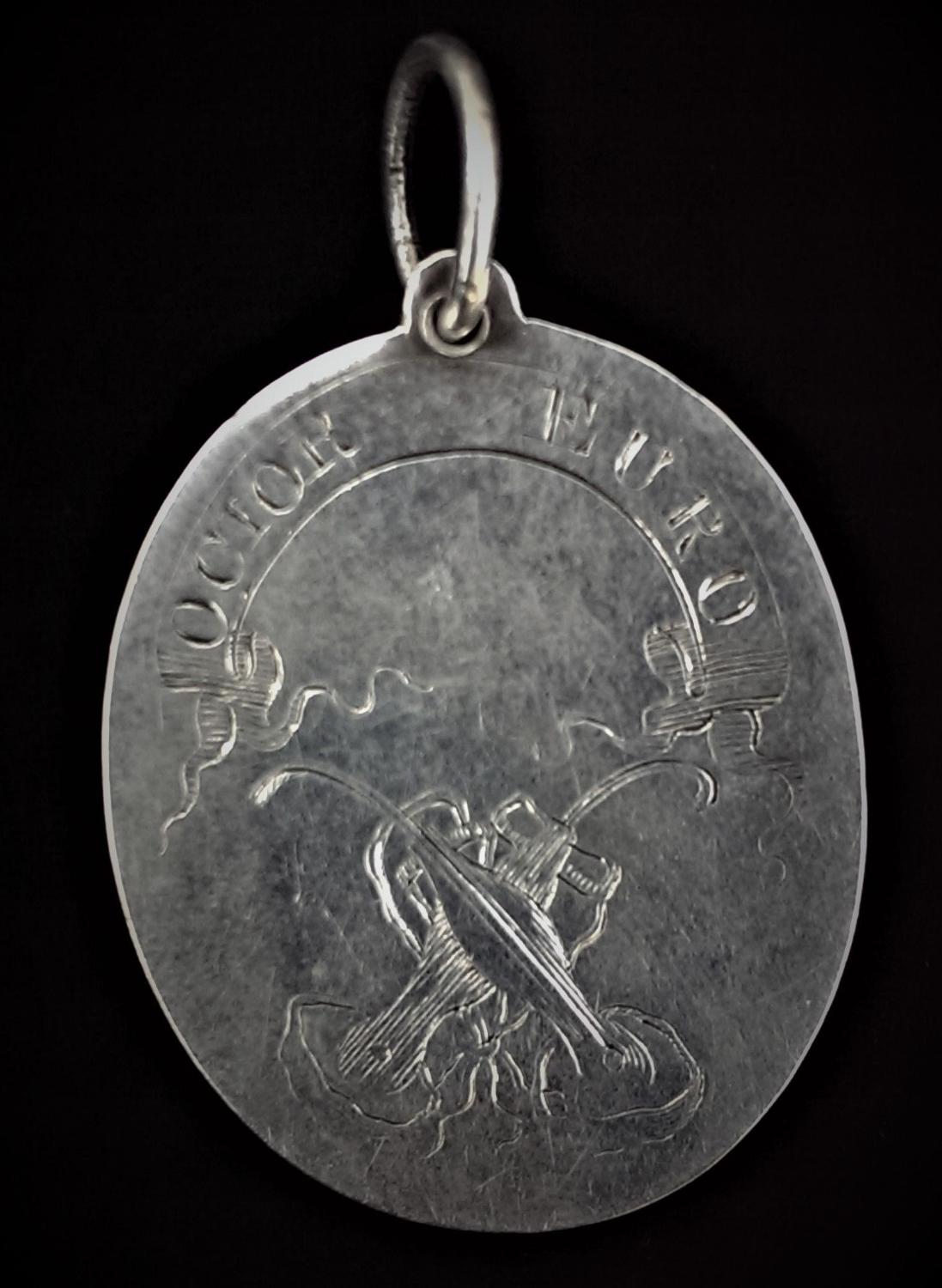 Badge of oval, lozenge shape in silver. Obverse engraved with a pair of crossed ice skates with their ribbons untied, the motto "OCIOR EURO" in a banner above. Reverse engraved "Edinburgh Skateing Society" [sic] with the name "Mr Jas Ramsay" beneath. Integral loop with hoop shaped bail attached, allowing hanging from the bearer's neck by a ribbon. Good, very fine and extremely rare.

A very rare early membership insignia for the Edinburgh Skating Club.  The Club, which generally met on Duddingston Loch or Lochend, originally styled itself as the "Skating Society" and was the world's first figure skating organization and one of the very earliest sports clubs. Though no formal records exist before 1778, it was probably established at some time in the 1740's (and was possibly in existence for even a century before then). The Club's motto "Ocior Euro" ("Swifter Than the East Wind"), a quotation from Horace's Odes, was an expression of the classical learning espoused by many of its members. Another manifestation of the period known as the Scottish Enlightenment, it was egalitarian by nature (though membership conferred certain social advantages). Those who were admitted were drawn from many walks of life and stratas of society. 18th Century Edinburgh saw a proliferation in the establishment of all sorts of social, intellectual and cultural clubs. The Musical Society of Edinburgh, with whom the Edinburgh Skating Club shared forty members, was established in 1728; The Easy Club (also known as the "Free and Easy Club" in 1712; The Select Society in 1754; The Poker Club in 1762 etc. Members are listed in the Edinburgh Skating Club's records with their profession beside their name (where appropriate); many are gentry, but there are also 'Writers to the Signet' (solicitors), other lawyers, soldiers and surgeons, architects, bankers and merchants.  It has been argued, quite plausibly, that skating represented a comprehensive embodyment of enlightenment principals:- members were admitted on merit; had to demostrate skill to join; gained joy and fellowship through a harmless physical activity; communed with nature and, through practice, attained elegance, agility and poise. They endeavoured to "skate together in concert"1 and to achieve the improbable feet of moving gracefully across ice at speed (thereby demonstrating man's triumph over the elements). Membership could also be seen as an emerging expression of Scottishness. By the mid-19th Century the Club had Royal patronage (firstly Prince Albert in the 1860's and then, after his death, the Prince and Princess of Wales (later Edward VII and Queen Alexandra)).

An initial list of thirty-nine members was complied by some amongst their number from memory and recorded in the Club's earliest extant minutes which are dated January 1778. These thirty-nine constitute the earliest known membership and, as they were already participating in the Club's activities, their names were minuted without any date for their admission. Their badges seem to have been undated accordingly (subsequent members were noted down in the minutes with a date for their election and often (though not always) their badges bear a corresponding date). The very first name on the list is "Commissioner Clark Maxwell" (i.e. Sir George Clerk Maxwell (1715–1784), an enlightened landowner, Commissioner of Customs and a founder member of the Royal Society of Edinburgh). Another member of this exclusive early group of thirty-nine was "Mr John Balfour, Bookseller" (being John Balfour (1715-1796), a partner in the printing/publishing firm Hamilton, Balfour & Neil and a key member of the18th-Century Scottish Enlightenment book trade). The emergence of this badge engraved for "Mr Jas Ramsay" confirms the identity of another of the earliest members, which it was only possible for previous authors to speculate on. Ramsay appears as the last name on the first list as "Mr Ramsay, Slater" (i.e. he ran a business specializing in roofing materials). This left doubt as to his identity and whether he was Alexander Ramsay (d.1787) or James.

The National Museums of Scotland hold a handful of undated badges for the following early members: "Mr Matt. Sandilands" (another on the initial list of thirty-nine members already admitted before 1778); "Patrick Anderson" (admitted on January 19th 1778); "James Dewar" [of Vogrie] (admitted on January 1789); and "Thos. Hogg" (an unrecorded early member, (possibly Thomas Hogg (c.1720-84)) who had possibly ceased to skate before the 1778 list was compiled). A further undated badge for Andrew Bonar appeared at auction in 2012 2 (Bonar was elected to the Club in January 1784).

In the early years, members were responsible for sourcing their own badges (sometimes called 'medals') and there is great variation in their appearance. Those belonging to Matthew Sandilands and Thomas Hogg are almost identical (though slightly smaller) to James Ramsay's badge here. All three have the same idiosyncratic spelling of "Skateing". A badge with the engraved date of "1792" belonging to "Jas Home" corresponds to the admission date of Dr James Home (1760-1844) (Professor of Medicine at Edinburgh University). We do not know from where these members  obtained their insignia, however, a second badge belonging to James Dewar, also held by National Museums Scotland, has a date of '1801'. This badge has an Edinburgh hallmark and is struck with the maker's mark 'ID' (for the silversmith 'James Dempster'), which may give a clue to a possible maker for the early badges. A similar silver badge dated 1790 for the convivial club known as the "Helter Skelter Club" (once thought purely to have been a fictitious creation of Sir Walter Scott) bears a "PR" maker's mark for the Edinburgh silversmith Patrick Robertson, suggesting another possible candidate for the manufacture. It should also be noted that the badge here, along with the other oval badges of the very earliest members, is of an identical form and with highly comparable engraving to the known insignia of the silver members' badges of the "Free and Easy Club" which also date to the 1770's and 1780's. These were certainly made by the same, as yet unidentified, silversmith.3

On 30th January 1784 "Mr Ramsay, Slater" (who now can be identified as James Ramsay (d 1797)) was elected as one of the first named officers of the Club: becoming its first Treasurer. He was elected alongside the first President, Sir Alexander Dick (1703-1785) (President of the Royal College of Physicians of Edinburgh and another Founding Fellow of the Royal Society of Edinburgh) and the "Depute-Secretary" [sic] John Rae (1749-1808) (the pioneering Surgeon-Dentist) who was admitted to the Club in January 1780 and whose father was another on the initial list of thirty-nine members).

James Ramsay is credited as having saved Parliament House and Hall in Edinburgh from being consumed by a fire on 12th December 1786. The building had housed Scotland's pre-Union Parliament and became the Scottish Records Office and the Advocates' Library. Ramsay stopped an inferno by suggesting that damp cow hides be thrown onto the flames to smother them.4 Thomas Aitchison's "Directory for Edinburgh, Leith, Mussleburgh [sic] and Dalkeith. Containing the names and places of abode of public & private gentlemen..." (published 1794) includes James Ramsay, a slater, living at New Street, Canongate, Edinburgh and he appears at this same address in the list of Subsribers to the 3rd Edition of Robert Burns' "Poems Chiefly in the Scottish Language", published in 1787. On 29th June 1760 he may have married Christina/Christian Ramsay (possibly a cousin) who was daughter of Gilbert Ramsay (d. before 1743), the solicitor and factor to the Duke of Roxburghe, and Katherine Karr, daughter of Andrew Karr of Kippilaw.  James Ramsay died in Edinburgh on 13th October 1797 and is described in The Scots Magazine of 1797 as having been "Slater to the Board of Ordnance".

There are two celebrated paintings of Edinburgh Skating Club members from this earliest period: Gilbert Stuart's 'The Skater' (1782) [Fig 1] and 'Rev Walker Skating' (circa 1790's), attributed to Henry Raeburn [Fig 2]. Stuart's 'The Skater' is a portrait of William Grant (1750-1821) who, along with James Ramsay, was one of the pre-1778 members of the Edinburgh Skating Club. Rev Robert Walker (1755-1808) was admitted to the Club in January 1780. Both of these men would have owned similar medals to that here and they would have worn them whilst skating. In the Club's rules (as set out in 1865) any Member who did not wear their 'medal' whilst on the ice or at club meetings, dinners etc was liable to pay a fine of 2s. 6d to the Treasurer.5

William Grant [Printer] "The Edinburgh Skating Club With Diagrams of Figures and a List of the Members", Edinburgh, 1865 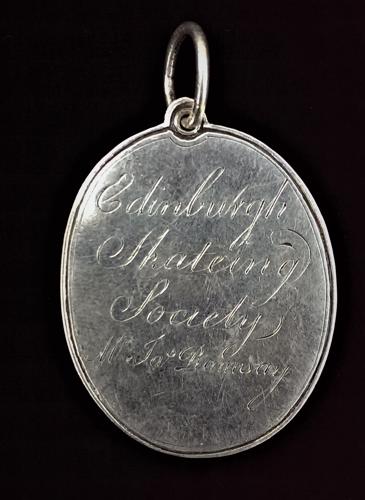 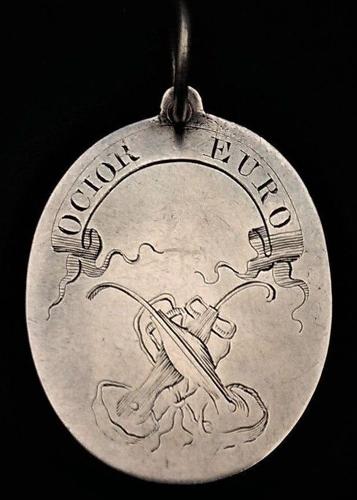 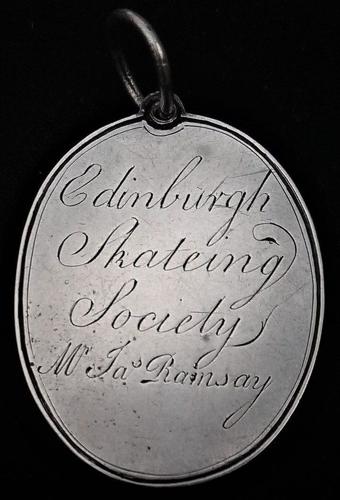 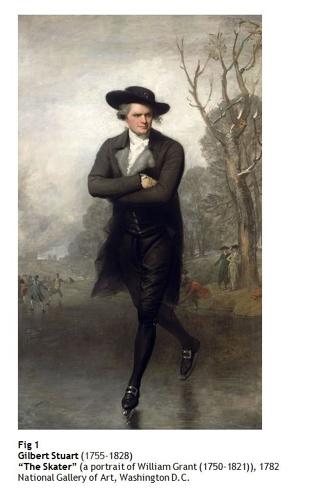 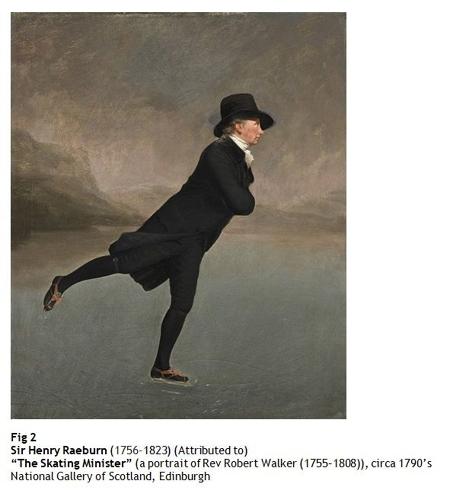