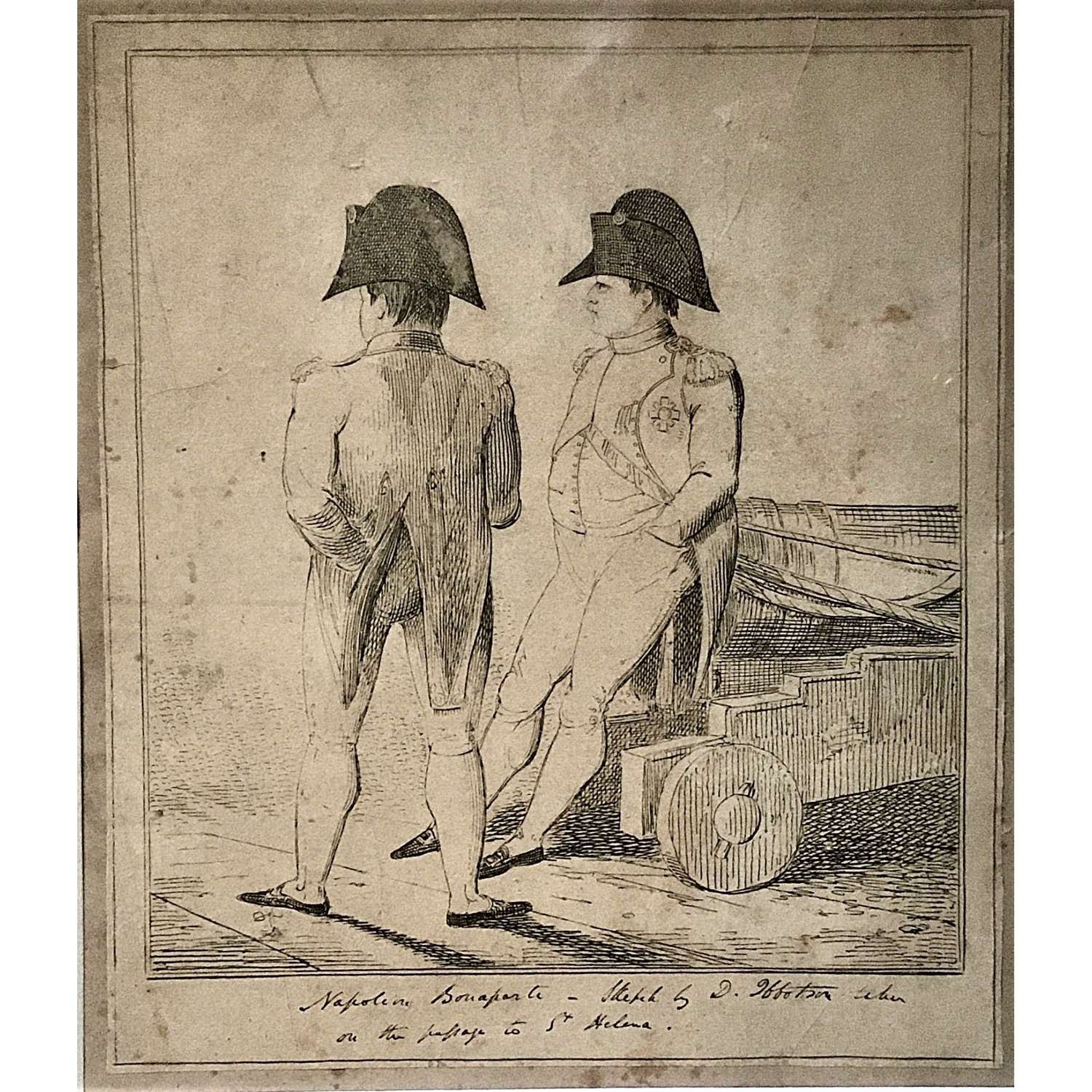 Captain Denzil Ibbetson (1775-1857)
"Napoleon Bonaparte on the deck of HMS Northumberland"
(Two views of Napoleon; leaning on a canon in profile and seen from behind)
Etching on paper
24.5 cm x 20.8 cm

Inscribed in ink beneath the image in the hand of the artist “Napoleon Bonaparte a sketch by D. Ibbotson [sic] taken on the passage to St Helena”. (The annotation corresponds to Ibbetson's own writing and spelling on other documents).

An extremely scarce etching by Captain Denzil Ibbetson, being a montage after two original drawings of Napoleon which he had made en route to St Helena. Napoleon leans against a gun-carriage, his hands in his breeches pockets, head in profile facing left, wearing his distinctive hat, uniform coat with orders, knee-breeches, and buckled shoes and in the other portrait Napoleon is standing, observed from the rear, left hand in his coat-tail pocket.

This print has previously been attributed on stylistic grounds to George Cruikshank (see item 1778 in Cohn’s George Cruikshank catalogue raisonné (published 1924)), though it was thought to have been based on original sketches made by Captain Denzil Ibbetson. It was only known from two impressions (see BM 1978,U.838 and another in the Bruton Collection), however, in 2010 an archive of material which had been passed down by Capt. Ibbetson’s descendants emerged in New Zealand. This cache included two further prints pulled from the same plate as that offered here.[1] It is very likely therefore that the print was actually made by Ibbetson himself whilst he was resident on St Helena and was worked up from sketches he had made during the journey to the remote South Atlantic island on board HMS Northumberland.

On 7 August 1815 Napoleon had boarded HMS Northumberland, under the command of Sir George Cockburn (1772-1853), for the seven-week journey to his exile on St Helena (4,300 miles from France). Ibbetson was also on board the ship; the tedium of the voyage is captured in his illustration, particularly emphasised by the subject having being captured in two poses where he is staring aimlessly into the distance (presumably looking out to sea and the far distant horizon). On several occasions in his diary, Sir George Cockburn describes Napoleon’s appearance and demeanour during the voyage. For example in the diary entry for 19 August Cockburn notes:

"... General Buonaparte, since on board the “Northumberland,” has kept nearly the same hours: he gets up late (between ten and eleven); he then has his breakfast (of meat and wine) in his bed-room, and continues there in his déshabillé until he dresses for dinner, generally between three and four in the afternoon; he then comes out of his bed cabin and either takes a short walk on deck or plays a game of chess with one of his Generals until dinner (which is five o’clock)."[2]

On 25 August, Cockburn reported that Napoleon "was on deck but little before or after dinner; he seemed to have lost his appetite, and was in low spirits ...".[3]

Ibbetson was one of only a handful of British officers who remained on the island of St Helena for the entire duration of Napoleon’s incarceration. Those who were resident on the island had to while away the time by developing various hobbies and interests. In addition to painting and drawing, Ibbetson seems to have taken up printmaking. Arnold Chaplins’s 1919 publication “A St Helena Who’s Who” states:

"Ibbetson, Denzil. Commissary in St Helena 1815 to 1823. This artist executed more portraits of Napoleon than any other, and his skill was of higher order than all the rest, with the exception of [Emeric Essex] Vidal [(1791–1861)]. He drew numerous portraits of Napoleon whilst on board the Nurthumberland…"

There are a few hand-coloured lithographs in circulation of the right-hand figure of Napoleon as he appears here (leaning on the canon, but in reverse!). These emerged during the 19th Century and seem to have been made by Theodore Edward Hook (1788-1841), who visited St Helena in 1817, and probably raised funds by selling these as “original” watercolours by Ibbetson.

The Ibbetson etching here, however, is extremely scarce and has very close associations to Napoleon whilst he was in excile. Assuming this is in addition to and not the one previously in the "Bruton Collection" the number of known copies of this particular print, now extends to five. 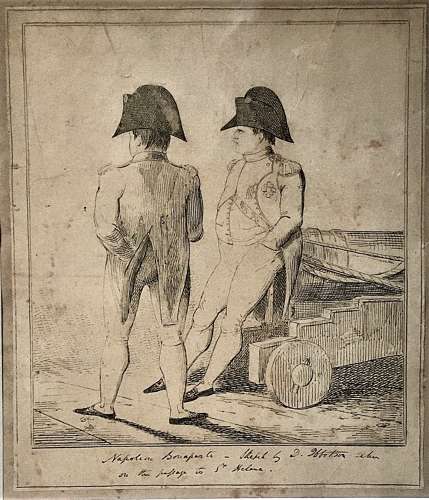