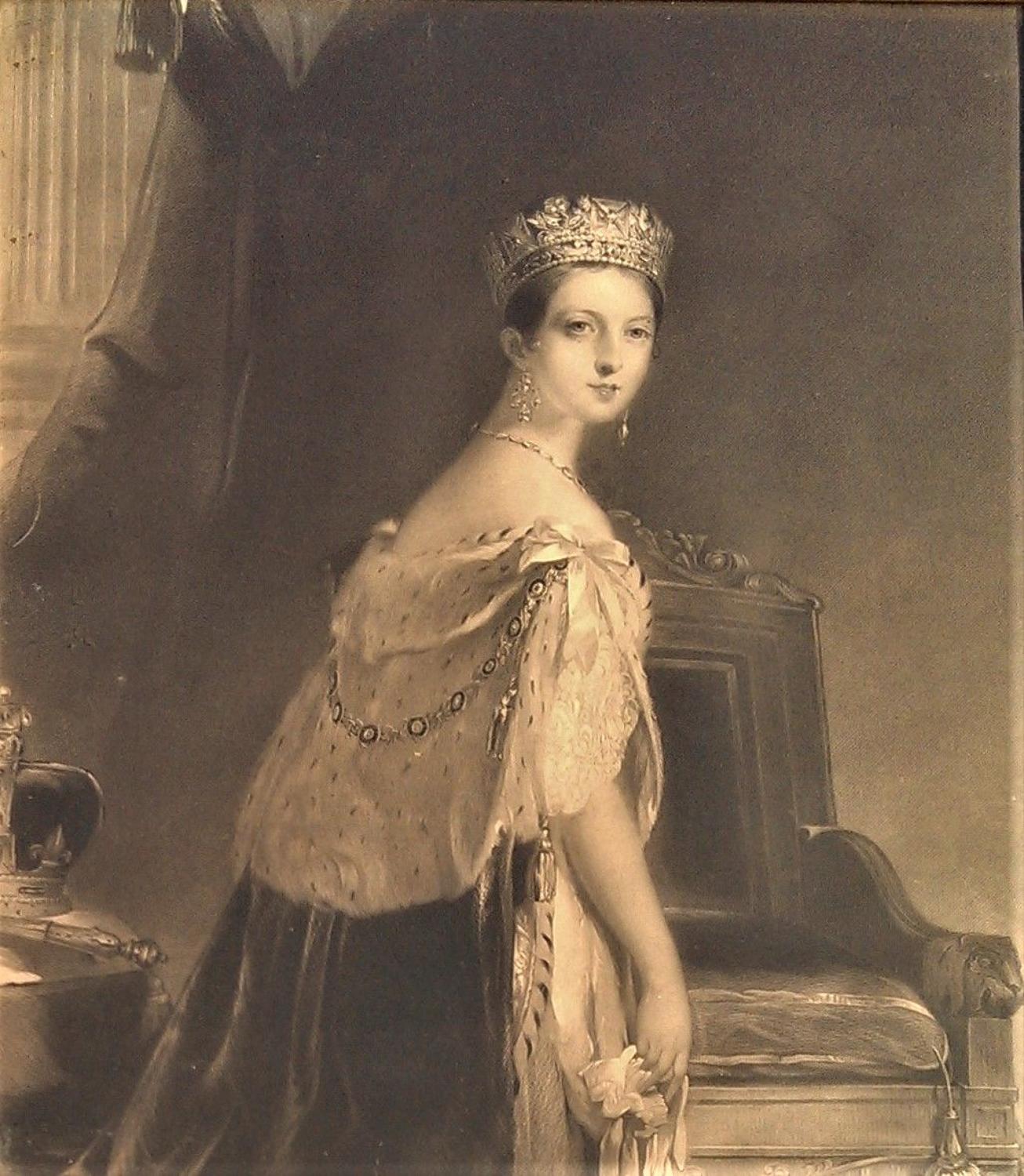 At the height of Sully’s fame he made a planned trip to England to which was appended, at the request of the Society of the Sons of St. George, a benevolent Philadelphia association founded to assist British nationals in the U.S., a commission to paint a portrait of the newly crowned Queen. On 22 March 1838 Victoria recorded in her diary: “I sat to a Mr. Sully, a painter who is come from America to paint me.” 1

Victoria sat for over fifteen artists during her Coronation Year. Sully was granted five sittings at Buckingham Palace to make sketches and studies and he chose an unusual pose with the Queen seen looking over her shoulder, towards the viewer, as she ascends the steps to the throne of the House of Lords. Outside his official sittings the artist’s daughter posed as Victoria wearing the appropriate robes. The resulting image was very successful in its suggestion that although just ascending the throne, the young Queen is alert, attentive and engaged with all around her. It was immediately accepted as an exceptional likeness.

A half-length portrait was commissioned from Sully whist he was still in London by Hodson & Graves, the Queen’s print publishers. This was swiftly completed and delivered in June 1838 and Hodgson & Graves in turn employed Charles Eden Wagstaff, a masterful engraver who employed numerous techniques to capture tones and textures in his prints, to engrave it in mezzotint. When Wagstaff’s plate was ready the painting was exhibited by Hodgson & Graves at the Royal Academy in 1840. Advertisements in the Art Journal of that year confirm that the prints were extremely costly; they were originally priced between £1 1s and £4 4s depending on the state. Through these engravings Sully’s portrait became one of the best-known images of the young Queen Victoria. The original of the Hodgson & Graves portrait was acquired by acquired by the Marquess of Hertford in around 1855 and now hangs in the Wallace Collection.2

On his return to America Sully produced two full-length versions, one for the Society of the Sons of St. George 3 as commissioned and another which he retained for himself and later presented to St. Andrew’s Society in Charleston, South Carolina (this was destroyed during the American Civil War). A dispute arose between Sully and the Sons of St. George as to who had exclusive rights to the image. This became the first artistic copyright case to be brought before the American Bar. The commissioners of the portrait argued that they had exclusive rights over the image but in 1839 the Supreme Court of Philadelphia held that, whilst the Society held ownership of their portrait, Sully retained title to the design and any other versions made allowing him to gain revenue from reproductions of the image.

3. The original Society of the Sons of St. George painting is currently held by the Metropolitan Museum of Art, New York (Lent by Mrs. Arthur A. Houghton Jr. Accession Number:L.1993.45).