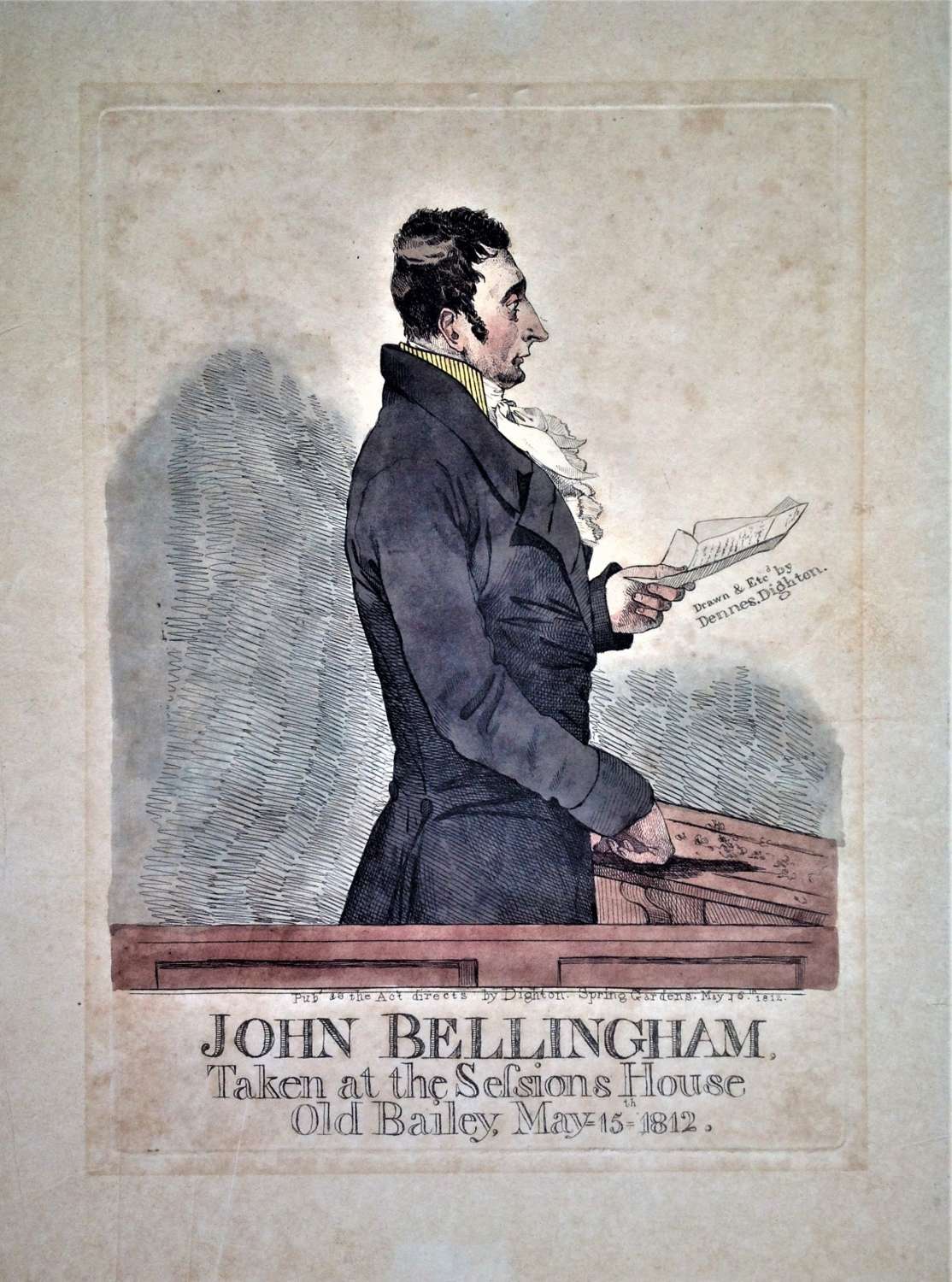 A portrait of John Bellingham (1769-1812), the assassin of the Prime Minister, Rt Hon. Spencer Perceval, depicted in the dock of the Old Bailey. Half-length in profile to right, holding a document.

John Bellingham was a British merchant who traded with Russia. After the loss of a cargo ship with goods on board belonging to him, Bellingham had encountered financial difficulties. He was imprisoned for debt in Russia between 1804 and 1809 before finally being allowed to return to England in penury. Bellingham began to harbour an irrational sense of injustice against the authorities, whom he perceived as having abandoned him to his fate. This long-standing grievance against the government for their "mistreatment" of him festered until he decided to take a most drastic cause of action. At about 5:15 pm, on Monday 11 May 1812, John Bellingham confronted the Prime Minister Spencer Perceval in the lobby of the House of Commons in London. He bore no particular grudge against or malice towards Perceval, indeed he may have been looking for Lord Granville Leveson-Gower, who had been British Ambasador in Russia at the time of Bellingham's imprisonment. Whatever the circumstances, Bellingham shot Perceval from point-blank range with a pistol which he had bought just a few days before and concealed in a secret pocket which he recently asked a tailor to incorporate within in his overcoat. Bellingham was immediately apprehended by the journalist William Jerdan, then editor of The Sun newspaper. Perceval was rushed from the scene to the Speaker’s Apartments where a few minutes later he was pronounced dead.

Bellingham was quickly tried, appearing at the Old Bailey at 10 o'clock on Friday 15 May 1812. A large throng of many of society's most important men and women gathered in the courtroom to witness the proceedings. The speed of the trial allowed for no evidence to be brought which may have attested to Bellingham’s possible madness (his father, for example, had been mentally ill and there was some suggestion that he had committed suicide). The evidence was delivered during the morning and early afternoon of 15 May. Bellingham was represented by the Irish barrister Peter Alley, who could do little to help his client. Bellingham refused to enter a plea of insanity, instead insisting that the shooting was the only way by which he could draw attention to his plight and obtain justice for the wrongs which had been done to him in Russia. The jury retired to deliberate the case and returned within 14 minutes to deliver a verdict of "Guilty!"

The Judge, Lord Chief Justice Sir James Mansfield, summarized Bellingham's crime as one of the "most malicious and atrocious crimes it is in the power of human nature to perpetrate", describing him has having "shed the blood of a man admired for every virtue". Bellingham was duly sentenced to death by hanging, his body "to be dissected and anatomized". He was executed outside Newgate Prison at the stroke of 8 a.m. on Monday 18 May, just one week after Perceval's assassination. Lord Byron stayed up all night to watch Bellingham "launched into eternity" and the day had an enduring effect on him. Bellingham's skull is preserved as an exhibit at St Bartholomew's Hospital, Pathology Museum.

This portrait was made by Dennes Dighton (1792-1829) on the day of Bellingham's trial and was published by the artist before Bellingham had even ascended the gallows. It is generally considered to be the best likeness of Bellingham in existance.

Dennes Dighton (also spelled "Denis Dighton") was a son of the celebrated caricaturist Robert Dighton and younger brother of Richard Dighton. He married to the artist Phoebe Earle (1790-1863) and in 1814 received the title "Military Painter to H.R.H. the Prince Regent".

David C. Hanrahan, "The Assassination of the Prime Minister: John Bellingham and the Murder of Spencer Perceval", History Press, London, 2011

Andro Linklater, "Why Spencer Perceval Had to Die: The Assassination of a British Prime Minister", Bloomsbury, London, 2012