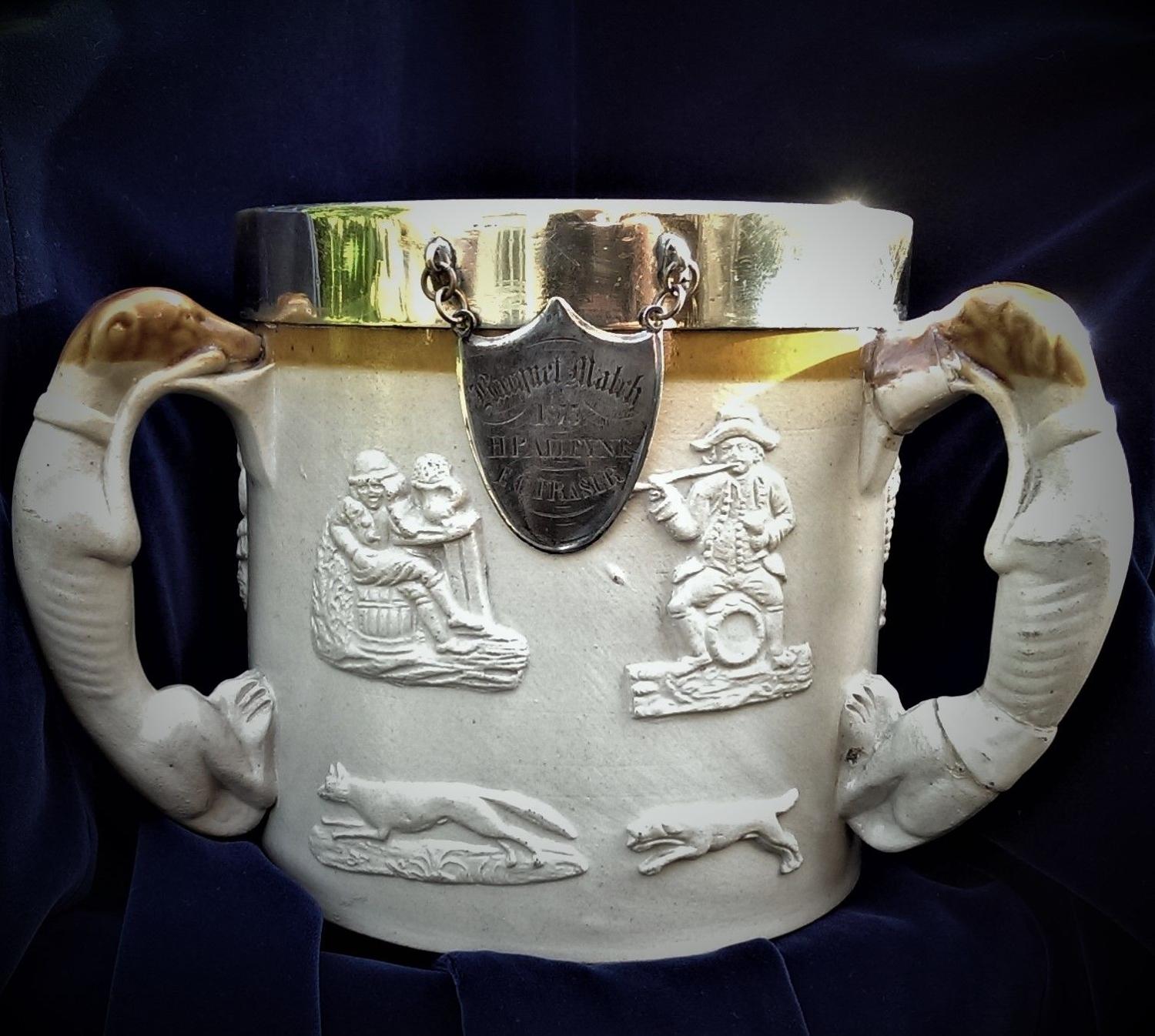 A highly unusual sporting trophy with unique associations to the early history of Rackets, the F.A. Cup and the birth of England Rugby Internationals

Description:
An imposing sporting ‘trophy’ which takes the form of a large salt-glazed stoneware 'tyg' (three handled cup). The tyg, although unmarked, was almost certainly manufactured by the Doulton Lambeth pottery (with their customary two-toned glaze with ‘harvest ware’ sprigging). The vessel has a white metal mounted rim to which is fitted a white metal shield-shaped plaque, suspended by chains. The plaque is engraved “Racquet Match / 1875 / H. P. ALLEYNE / E. C. FRASER”.

Notes:
This recently discovered ‘trophy’ would be unusual even without the unique historic sporting associations of the two names engraved upon it. Awarded in 1875, the prize carries the names of two men who, in the same year, respecitvely played in the first ever England Ireland Rugby Interernational and that season's F.A. Cup Final - whilst they were still undergraduates in the same college! This feat would, within a few short years, become almost impossible to achieve again. Originating from the period during which many sports were being codified for the first time, there can be few items which represent such an unusual conjunction of the early histories of rackets, football and rugby union. This period of gentleman players is about to receive considerable attention through the forthcoming Netflix series "The English Game".

Herbert Percy Alleyne (1855-1884) and Edward Cleather Fraser (1853-1927) both studied at Merton College Oxford and were members of Merton College’s Myrmidon Club - an institution with very strong sporting associations. The tyg might be an internal Merton College trophy, an Oxford University inter-collegiate cup or, possibly, a prize for some, as yet, unidentified challenge tournament or exhibition match. At this stage in the history of Rackets the sport's Varsity Match was played at the Prince’s Match Court at Prince's Club (located between Lennox Gardens and Cadogan Square in London but demolished for housing in 1886). However, the Oxford pair who won the 1875 Oxford & Cambridge Varsity Rackets Doubles were actually Robert Oswald Milne (1852–1927) & T S Drury (St John's College ?-?).

The sport of Rackets (also known as Racquets (as here)) had already had a World Championship, on a challenge basis, since the 1820's. Both Oxford and Cambridge universities had built Rackets courts by 1855, the year in which their first annual Varsity encounter took place. This sport had flourished during the 1860s and 1870s and the first book on Rackets, John Ringwood Atkins' The Book of Racquets. A practical guide to the game and its history and to the different courts in which it is played, was published in 1872 (just three years before the awaring of the trophy here). In May 1876, The Manchester Racquet Club opened. This club ultimately moved (due to the construction of the London & North Western Railway), renamed itself and reopended in 1880 with an exhibition match between Robert Oswald Milne (see above) and Julian Marshall (1836–1903) (the man who had codified the rules of Real Tennis (in 1872) and would go on to write to rules of Lawn Tennis (in 1877)).

Until the investigations into this trophy were made Herbert Percy Alleyne was largely unresearched, very likely due to his early death and lack of surviving descendants. Born at Clifton on 5 March 1855 to a family with distinguished Barbadian connections, his maternal uncle was Henry Bruce, Lord Aberdare, the Home Secretary in Gladstone's government from 1868-1873. H. P. Alleyne was educated at Eton College where he excelled at sports, playing for both the Eton Football and Cricket 1st XIs (including playing in the Eton v Harrow Cricket Match played at Lord’s Cricket Ground on 11-12 July 1873 in front of a crowd of some 15,000). He was elected a member of the exclusive ‘Eton Society’ (commonly known as “Pop”) and after school went up to Merton College Oxford to read Literae Humaniores (better known as "Greats"). On St Andrew's Day 1875 he played in the traditional Oxford v Cambridge Field Game match at Eton.

Alleyne must have had a dilemma when considering which football club to play for: Oxford University or the Old Etonians? Oxford had been runners-up in the 1872–73 F.A. Cup, were winners of the 1873–74 tournament and Semi-Finalists in 1874–75 - the same season in which The Old Etonians were the beaten finalists. During the 1875-1876 season Alleyne played for Old Etonians and the team reached a second consecutive F.A. Cup Final (it was only the fifth year of the competition) were they faced Wanderers F.C.. Alleyne took part in both the final, which was played at The Oval on 11 March 1876 (which ended in a 1-1 draw), and  also the replay, which took place on 18 March (which Eton lost 3-0).

Soon after his arrival at Oxford, Alleyne had been elected as Secretary of the Myrmidon Club, which had been founded about a decade earlier. At this stage there could only be twelve members of the Club at any one time; they could invite interesting guests to attend meetings and elect new members to fill any vacancies left by those who had recently graduated. As Secretary, Alleyne effectively re-founded the club: he revived the dilligent recording of events in a minutes book (a custom which had fallen into abeyance before he assumed office but which now continues to this day); he established a new set of Club Rules; he levied a membership fee and successfully moved the Club to its own set of rooms at 104 High Street (thereby ensuring any high-jinx took place away from the colleges). Before graduating Alleyne became President of the Myrmidons and his leadership almost certainly ensured that the Club survived into the 21st Century.

H. P. Alleyne was the younger brother of Leonora Blanche "Nora" Lang (née Alleyne) (1851-1933). In the same year that this trophy was presented his sister married Andrew Lang (1844–1912) the poet, novelist and Fellow of Merton College. She had probably first met Lang through her brother.  Alleyne took a 4th Class degree in 1877. He was called to the Bar at the Inner Temple in 1878 and married Amy Constance Bright in 1880. He and his wife had one daughter, Stella Margaret Alleyne (born 1883), but Herbert died in November 1884 at the age of just 29.  Nora and Andrew Lang wrote the famous "Fairy Books" together and, as Stella Alleyne's uncle and aunt, they dedicated the "Green Fairy Book" to Herbert's daughter in 1892. Stella went on to study at Lady Margaret Hall in Oxford and, ultimately, became a senior civil servant. She died unmarried. Herbert's wife Amy remarried in 1890 and had three further children.

Edward Cleather Fraser was born in Mauritius on 2 April 1853. He was educated at Blackheath Proprietary School and became a member of Blackheath Football Club (the oldest open rugby football club in the world). He went up to Merton College Oxford in 1872 where he played for the Merton rugby team. Fraser was elected to become one of the twelve members of the Myrmidon Club during H. P. Alleyne's tenure of Office.

From 1873-1875 Fraser played for Oxford University Rugby Football Club and in 1873 competed in this sport's second ever Varsity Match. Playing as a Forward, he was a core member of OURFC, ultimately becoming a member of the Committee in an era which saw a huge growth in the game’s popularity and its transformation from a twenty-player to a fifteen-player-a-side format. Fraser played in the 1875 Varsity Match (which was the first to take place with the fifteen player format). During the 1874-75 season he represented the South of England in the North v South International Trial at the Oval. He was capped for England in 1875 (aged only 21) in the first ever England-Ireland international match (only the fifth ever rugby international). This took place at The Oval on 15 February.  In the scoring system operative at the time England won the match by two “goals” to nil.

Following his England cap and grduation, Fraser returned to Mauritius to become a partner in his family’s business. He married Mary Josephine Howie in May 1882 and they had a son (James Howie Fraser (b.1888)) and two daughters. He later became a Member of the Council of the Government of Mauritius and for his services to the island was appointed a Companion of the Order of St Michael and St George.

His son was educated at Rugby School and, interestingly, in 1908, Edward Cleather Fraser presented Rugby School Museum with various bones from specimens of Mauritius's famous Dodo along with those from extinct species of Solitaire birds. James Howie Fraser was killed in action in October 1914 whilst serving as a Lieutenant with the Gordon Highlanders and was posthumously Mentioned in Dispatches.

This trophy therefore bears the names of two distinguished and impeccably connected sportsmen who formed a winning undergrduate rackets partnership in the year 1875 and who, within that very same season, respectively played in an F.A. Cup Final and a debut England Rugby International.  It typifies a fascinating era of unrepeatable amateur sporting feats and sportsmanship.

No comperable trophy has been identified. Although Doulton Lambeth tygs were periodically mounted with metal rims and engraved plaques so that they could be used as prizes they are scarce and, when found, the sporting associations are, on the whole, unremarkable. Merton College Oxford hold a single, similarly mounted prize 'tyg', though of later date and without such noteworthy connections. The Railing Tennis Collection (see Christie's, 17 November 2005 [Sale 5687]) held no comperable item, though a presentation rackets racquet, dating to circa 1870, formed Lot 120 (sold for GBP 4,800).

Provenance:
Thought to have descended through the extended family of H P Alleyne.
Private collection Oxfordshire.

We are grateful to Mr. Julian Reid, archivist at Merton College Oxford, for allowing access to college's records and making the above research possible.

Condition:
In very good condition for its age. Sometimes these large tygs were used as wine coolers or champagne buckets. There is an old repair to one of the hound handles which was been reaffixed by means of ingenious metal bands to the muzzle and hind legs. The repair has been over-glazed and may actually date to the time when the vessel was fitted with mounts to be awarded as a trophy. 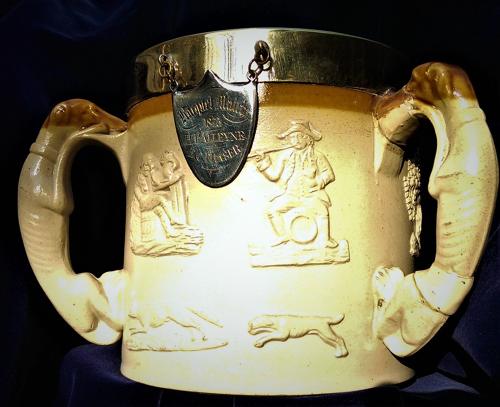 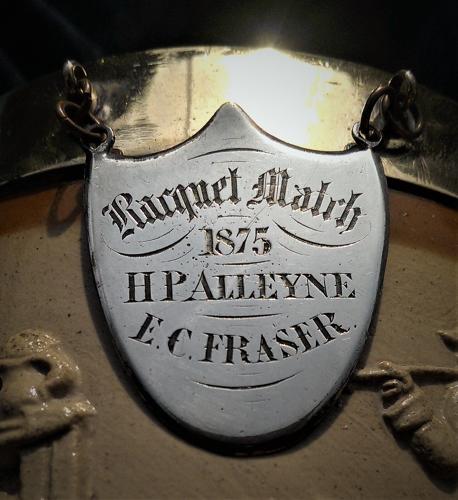 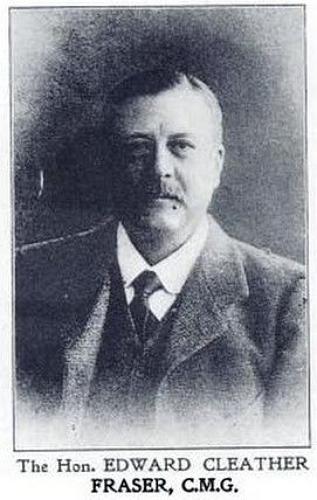 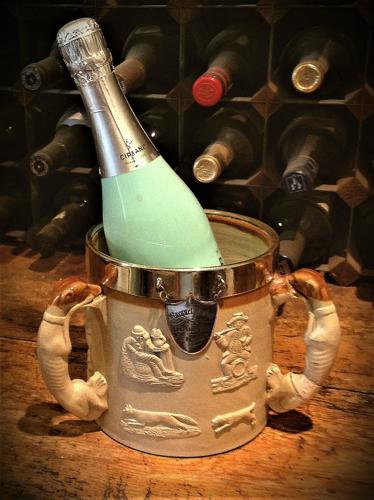