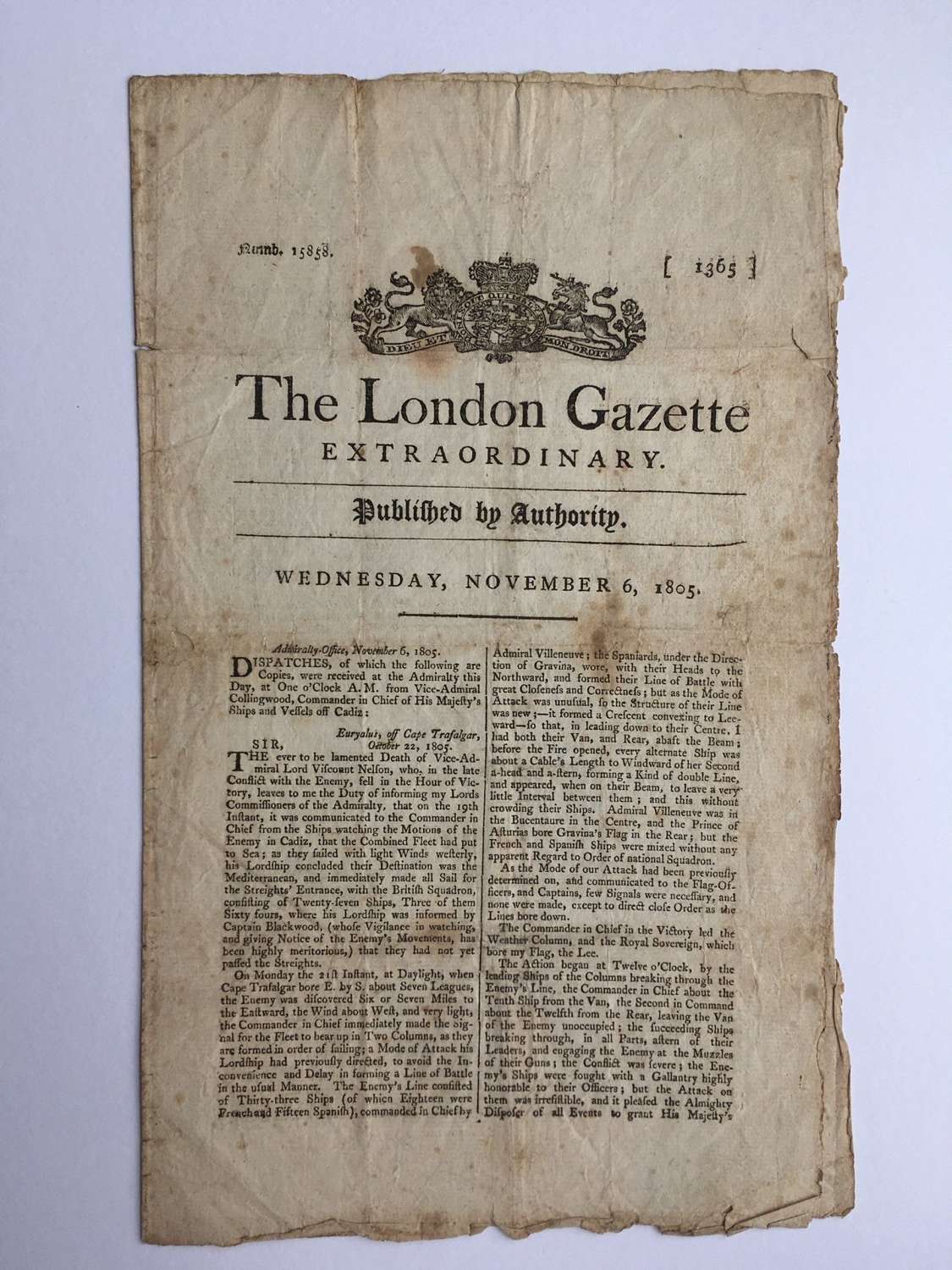 "Admiralty-Office, November 6, 1805.  DESPATCHES, of which the following are Copies, were received at the Admiralty this Day, at One o'Clock A.M. from Vice-Admiral Collingwood, Commander in Chief of His Majesty's Ships and Veffels off Cadiz"

An original issue of the London Gazette. Complete, as issued and sold on 6 November 1805, a same-day printing, not disbound. Four pages, auburn duty stamp to the interior. In sound condition, minor foxing and discolouration as expected. Some creasing and a few holes where the paper has been historically folded. An exceptionally rare item which has long been one of the most sought after items of ephemera relating the the Napoleonic Wars and Nelson.

Containing the full transcript of Vice-Admiral Cuthbert Collingwood's despatch, which occupyies all three pages of this special Exraordinary issue. The official and very first report which broke the news of the victory at the Battle of Trafalgar and the death of Horatio Nelson to the British public.

SIR, The ever to be lamented Death of Vice-Admiral Lord Viscount Nelson, who, in the late Conflict with the Enemy, fell in the Hour of Victory, leaves to me the Duty of informing my Lords Commissioners of the Admiralty..."

On October 26 1805, having assumed command of the fleet following the death of Nelson, Collingwood gave Lieutenant John Richards Lapenotière, captain of the schooner HMS "Pickle", orders to make the 1,500 mile journey from Cape Trafalgar to London to deliver his report of the battle to the Admiralty and instructed him to travel "using every exertion, that a moment's time may not be lost in their delivery."

Having braved high winds and very heavy seas the "Pickle" landed in Falmouth late on November 5 (which was, by co-incidence, the two-hundredth anniversary of the foiling of the Gunpowder Plot). Lapenotière hired a carriage and set off across Dartmoor for London, which was still 270 miles away. Riding non-stop through the night and the following day, bar the necessary change of horses, Lieutenant Lapenotière followed a well-known route to the capital, changing horses every 20-or-so miles. He had to make around 21 stops at coaching inns where he paid for the hire of horses and recorded these in his expense account, still preserved in the Admiralty archives. Horses were changed at Truro, Fraddon, Bodmin, Launceston, Okehampton, Crockernwell, Exeter, Honiton, Axminster, Bridport, Dorchester, Blandford Forum, Woodyates, Salisbury, Andover, Overton, Basingstoke, Hartfordbridge, Bagshot, Staines and Hounslow. The total cost of the journey was £46 19s 1d.

Lapenotière arrived at the Admiralty on Whitehall in the small hours of 6th November 1805. Most officials had retired to bed for the night but the Secretary to the Admiralty Board, William Marsden, was still awake and was intercepted on his way to his private apartments. Lapenotière handed over the dispatches to him with the impassive words, "Sir we have gained a great victory. But we have lost Lord Nelson." Lord Barham, the First Lord of the Admiralty, was awoken and was stunned when he read the dramatic report. William Pitt, the Prime Minister, was given the news at 3 a.m. Clerks were immediatey roused to write letters to the King, the Prince of Wales, the Cabinet, and to the Lord Mayor of London, who alerted the City and Lloyd's Coffee House.

Andrew Strahan, the Government's official printer, was woken and rounded-up his team of typesetters to print this Extraordinary edition of the London Gazette. It went to press before dawn and contains the full, unexponged text of Collingwood's dispatch. An unkown quantity of these Gazettes had been printed by daybreak, including the copy here, and there were for sale on the newsstands by 9:00 am. This official government release was, therefore, how news of this, as yet unnamed, battle "off Cape Trafalgar" was broken to the world. The following day several newspapers, including The Times, quoted The London Gazette Extraordinary in its entirity. Collingwood describes the triumph over the combined French and Spanish fleets, lists the dead and the wounded, and mourns the "ever-to-be-lamended death on Lord Viscount Nelson".

The London Gazette is the official newspaper of State and had been in existence since 1665. Originally entitled The Oxford Gazette, it was the world's first real newspaper and is still the official newspaper of record for publishng information from Government and other public notices. In it can be found the announcements of honours and awards, commissions and promotions. The phrase "gazetted" derives from the publication of a promotion in the London Gazette. In addition to normal copies of the newspaper Extraordinary editions were printed when there where exeptional items of news which needed to be broadcast.

The anniversary of the arrival of the "Pickle" is still celebrated each year at a special service in the church at Maldron in Cornwall. 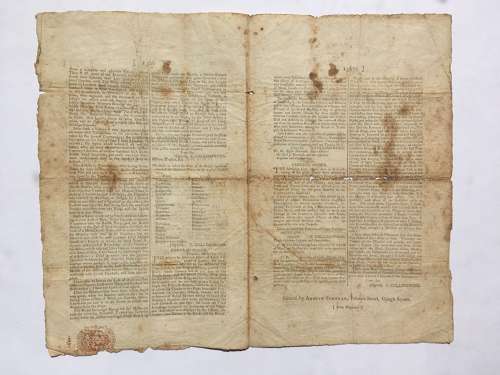 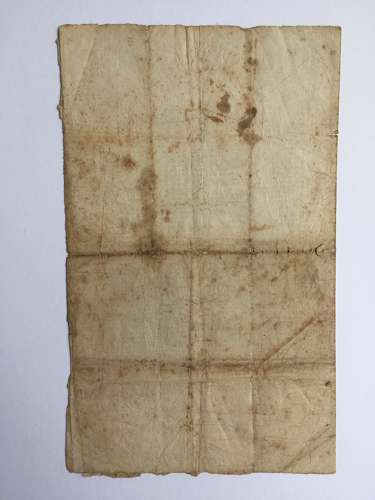