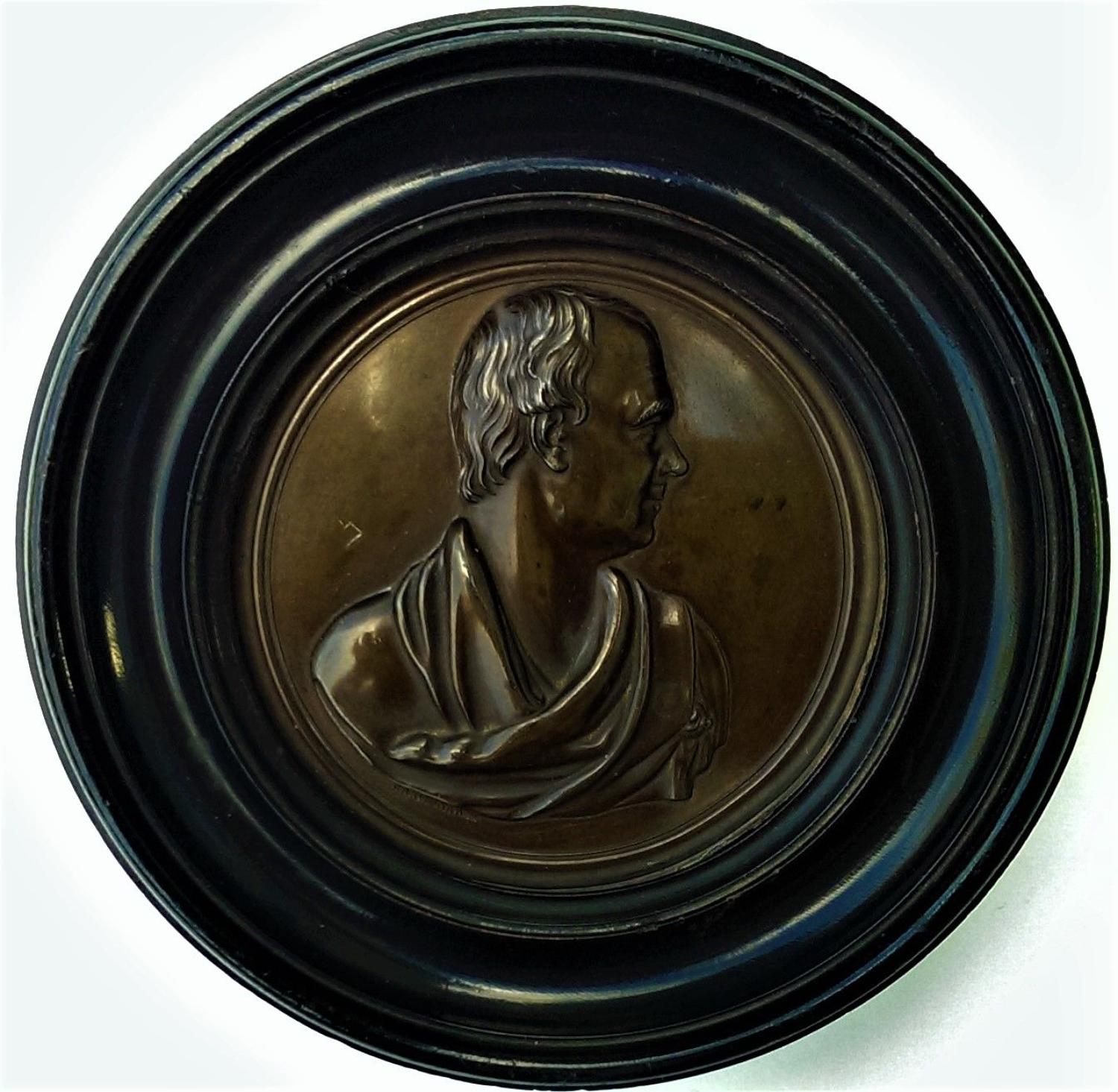 Bronze plaque of Sir Walter Scott (1771-1832) bare head profile right, draped in the classical manner with plaid brooch to the left shoulder. Signed beneath the neckline of the bust "CRAWFORD F."

Thomas Crawford was born in Manhattan, New York in around 1813 and in his early youth was apprenticed to a wood carver. In 1832 he went to work for New York's leading firm of monumental masons and decorative marble carvers run by John Frazee and Robert Eberhard Launitz. In the autumn of 1835 he travelled to Rome with a letter of introduction from Launitz to the Danish-born artist Bertel Thorvaldsen (1770-1844), the preeminent neoclassical sculptor at this time. Allthough Crawford only studied for a short while under Thorvaldsen, his work exhibits the strong influence of this master. He soon set up his own studio and international practice, becoming the first American sculptor to settle permanently in Rome (his slightly older contemporaries Hiram Powers (1805-1873) and Horatio Greenough (1805-1852) had both based themselves in Florence).

Crawford was elected to the US National Academy of Design as an Honorary Academician in 1838. He visited America in 1849, winning a commission to create a monument to George Washington for the centre of Richmond, Virginia. His most celebrated works, however, are those which he designed for the U.S. Capitol Building in Washington D.C. These include various sculptures, pediments and the bronze doors for the House and the Senate.  His most famous piece is almost certainly his colossal statue 'Armed Freedom' which tops the Capitol's dome. This last work was completed posthumously after Crawford's sudden death from a from a brain tumor in 1857. His remains were interred at Greenwood Cemetery in Brooklyn, in the vault which belonged to the family of his wife, Louisa Cutler Ward (1823-1897). His widow continued to live in Rome where she remarried the American painter Luther Terry (1813-1900) and where she raised her and Thomas Crawford's daugher and son - both of whom went on to become celebrated authors (Mary Crawford Fraser (Mrs. Hugh Fraser) (1851– 1922) and Francis Marion Crawford (1854–1909)).

This plaque by Crawford derives from the bust of Scott by Sir Francis Leggatt Chantrey (1781-1841). The original likeness for which was made by Chantrey in 1820 and 'refreshed' by him in 1828. It would not be an exaggeration to say that Sir Walter Scott's fame in his own day, and for much of the 19th Century, was on a par with that of Shakespeare. His historical novels and poetry were read internationally and brought him huge success, ensuring there was a ready market for his image. Crawford was one of a number of artists who used Chantrey's bust as a prototype for their own medals, plaques and intaglio gems.