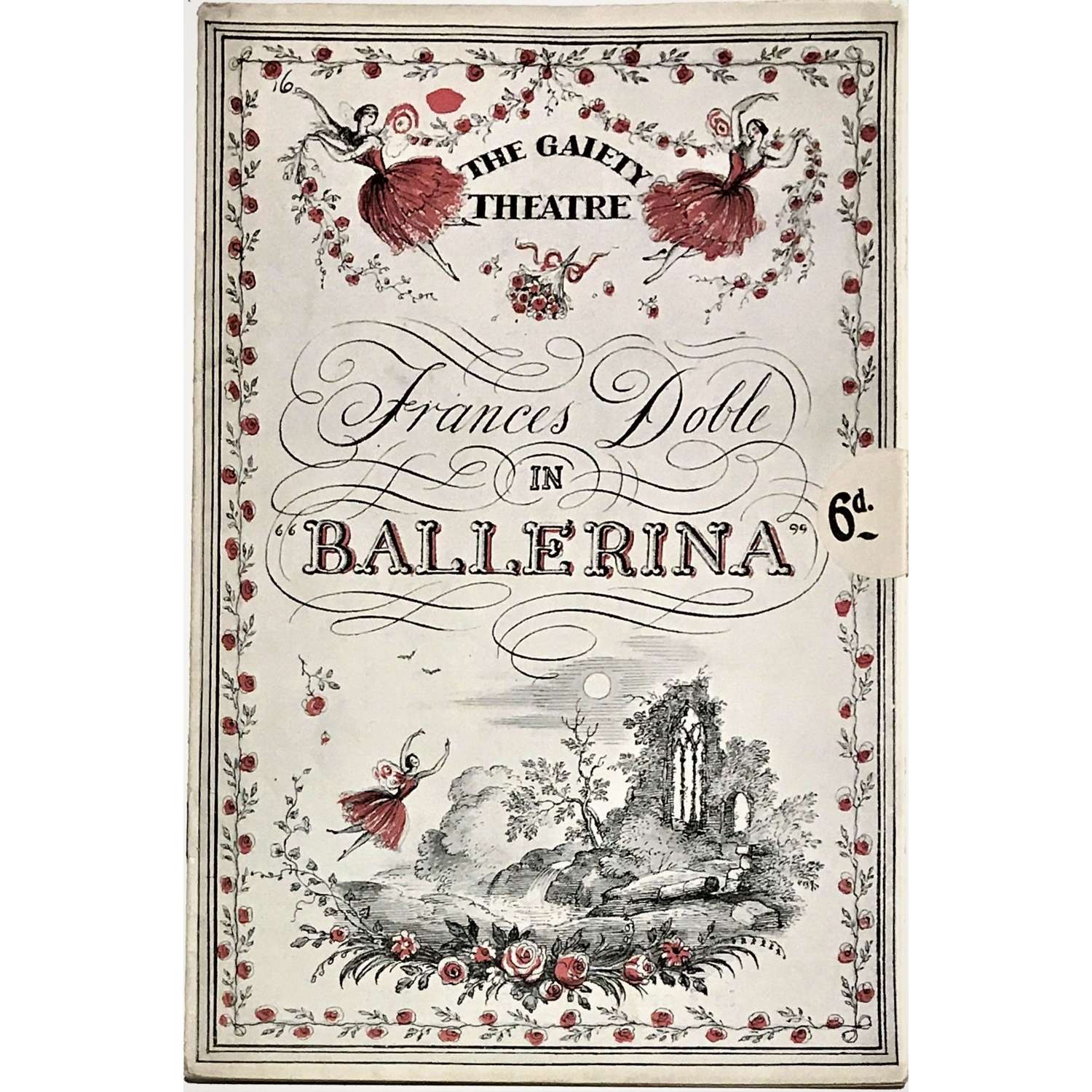 The cover for "Ballerina" was Rex Whistler's first venture into West End Theatre programme design. The commission presumably came about through Lady Eleanor Smith (1902-1945), a central member of the "Bright Young Things", prolific writer and elder daughter of F. E. Smith, 1st Earl of Birkenhead (1872-1930) (a leading politician, hard-living wit, former Lord Chancellor, Secretary of State for India and Winston Churchill's closest friend). Both Lady Eleanor and her sister Lady Pamela were photographed by Cecil Beaton in 1930 for "The Book of Beauty". Eleanor had been at school with two others of the "Bright Young Things", the beautiful and mischievous Jungman Sisters (Zita and Teresa (aka "Baby")). Rex designed the covers for Smith's novels from the publication of her very first book, The Red Wagon, in 1930. Ballerina appeared in 1932 as a cautionary tale of fleeting fame and transitory happiness; a tear-jerking tale of love sacrificed to art, it tells the story of an ambitious mid-19th Century circus performer, Polly Varley, who takes the stage name Lina Varasvina, and journeys through various loves and losses to become a famous prima ballerina. As a ballerina Lina Varasvina's signature 'pas seul' is a piece called "The Dance of the White Rose" and the daughter she gives up in the pursuit of fame is called "Rose". The cover conveys much of the story's sense of sentimentality and Victorian melodrama.

In addition to the cover of the programme, Rex Whistler designed the costumes for Frances Doble in the lead role. Doble was the beautiful actress wife of Sir Anthony Lindsay-Hogg (they ultimately divorced and she went on to have an affair with Kim Philby). Her younger sister Georgia was a friend of Rex Whistler and married to Sacheverell Sitwell. Amongst the ensemble cast of actors are a number of other very disinguished names including Lewis  Casson (1875–1969) (husband of Dame Sybil Thorndike), who played the Ballerina's early mentor. Choreography was done by Anton Dolin. The sets were designed by Aubrey Hammond (1893 –1940). Angus McBean (1904–1990) [here listed as Angus MacBean], who became one of the 20th Century's most important theatrical photographers, produced the masks used in some of the scenes.

The colours chosen for the programme by Rex Whistler are almost certainly an oblique reference to the legendary “Red and White Party” which had taken place on 21st November 1931 in the West Wing of Holford House, a huge, grand but delapidated mansion in Regent’s Park. The Canadian born dancer Maud Allan, notorious for her portrayal of Salome's "Dance of the Seven Veils" in her "Vision of Salomé" (based loosely on Oscar Wilde's telling of the story), had lived alone in this portion of Holford House (as a Norma Desmond like figure) since 1909. A former star and favourite of "The Coterie" (the fashionable socialites who were the immediate predecessors of the "Bright Young Things"), Allan had been embroiled in the sensational Libel Case of the Century in 1918 when she had sued the publishers of an article which accused her of sexual depravity with Margot Asquith, wife of the former Prime Minister Herbert Asquith. During the trail it emerged that her brother had been executed in the U.S.A. for the double-murder of two women in San Francisco in 1898. Lord Alfred Douglas, Oscar Wilde's former lover, testified for the publisher and Allan had lost her case. As sole tennant of the West Wing of Holford House, Maud Allan was approached by "Bright Young Thing" Arthur Jeffress (1905–1961) as to whether he could use her home as the venue for a ball. This "Red and White Party" became the denouement of the series of increasingly outrageous "Monster Balls" hosted by various amongst the "Bright Young Things" (which included the "Circus Party" of July 1929, thrown by Norman Hartnell, to which Eleanor Smith had arrived on a pony which she then rode upstairs).

For the "Red and White Party" the entire evening (costumes, décor, flowers, food and drink) was based on the theme of red and white. It was a bold choice of colour combination and one loaded with sybolism: purity and passion; chastity and hedonism; love and death. Two-hundred-and-fifty people were invited but four-hundred turned up and they partied noisily till the dawn (there were even arrests for drugs). The revellers were slammed in the press for flaunting their "ill-bred extravagance" in the wake of the September 1931 fiancial crisis. The trial for murder of "Bright Young Thing" Elvira Barney in 1932 (at which the host of the "Red and White Party", Arthur Jeffress, gave testimony) also heralded an end to that particular era of hedonism. Parralels can be found between the fictional drama of "Ballerina" (and its imaginary heroine Polly Varley), the real life of story of former exotic dancer Maud Allan and the "Red and White Party". The colours chosen by Rex Whistler, along with the music in the programme (which also alludes to a red and white theme), would not have been lost on the high-society theatre going audience of 1933.

This stage production of "Ballerina" ran for only a month at the Gaiety Theatre, but Lady Eleanor Smith's book also became the basis for the Hollywood movie "The Men in Her Life" (1941), starring Loretta Young.

Cecil Beaton & Laurence Whistler, "The Masque: Designs for the Theatre By Rex Whistler Part I", London, The Curtain Press, 1947 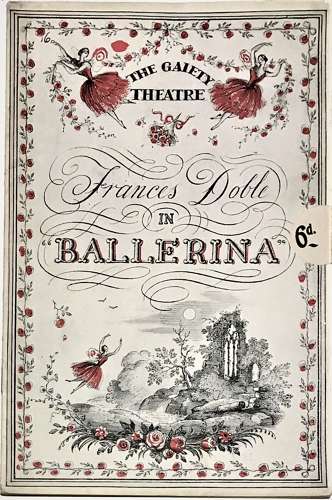