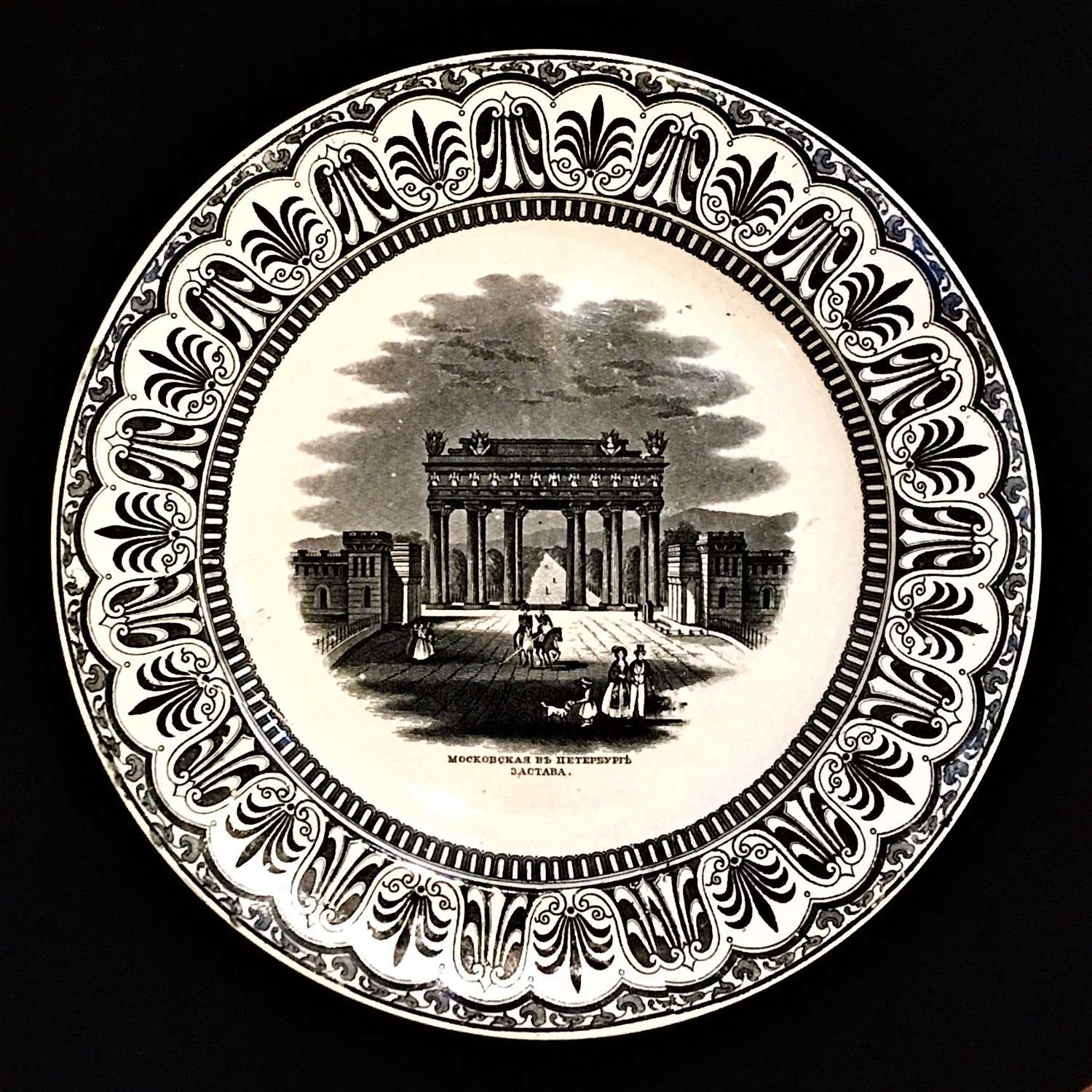 A 19th Century Stoneware Plate Decorated with a Transfer Print of The Moscow Triumphal Gate, St Petersburg (Моско́вские Триумфа́льные воро́та). Made in England (probably by Wedgwood) for the Russian market. Circa 1850.

Description:
Rim decorated with a patterned border of neoclassical anthemion palmettes. Interior with transfer print of the neoclassical triumphal arch known as the “Moscow Triumphal Gate” in St. Petersburg. A couple, a child and a dog walking before it, people on horseback etc. Inscribed beneath the image in 19th Century Cyrillic “МОСКОВСKАЯ ВЪ ПЕТЕРБУРГѢ ЗАСТАВА” (roughly meaning “Moscow Gate in St. Petersburg". (In standardised Cyrillic the archway is known as the “Моско́вские Триумфа́льные воро́та”).

The “Moscow Triumphal Gate” is a monument in St Petersburg which commemorates the Russian victory in the Russo-Turkish War of 1828-1829. Built mainly of cast iron to the designs of the Russian architect Vasily Stasov (1769 –1848) the gate was built between 1834–1838 and ceremonially opened on 16 October 1838.  At the time it was the largest structure in the world to be made from cast iron.

Marks:
The underside marked with British royal coat of arms, the word “Etruria” above and “PATENT / D.W.” below. Geoffrey Godden notes several marks with printed Royal Arms including the initials “D.W.” on items made by different manufacturers. He concluded that these relate to a retailer “probably foreign”. Here the presence of the word “ETRURIA” above suggests in this case Wedgwood as a possible manufacturer. There is an old collection label to the underside.

Notes:
For a similarly marked plate in the State Historical Museum, Moscow - attributed to Wedgwood & Co - see online article “English Pottery In Russia in the 18th and 19th Centuries” by Darya Tarligina.

A bowl with an identical transfer print is in the collection of Hillwood Estate Museum & Gardens, Washington DC, USA (See Hillwood Catalogue Number: 2010.13).

CONDITION:
In very good condition for age. No chips of cracks. Usual crazing commensurate with age.  Typical manufacturing imperfections - discreet spur marks from the firing process on back and front - a few very minor misalignments of the transfer prints - black ink of transfers is cobalt blue in some areas etc. 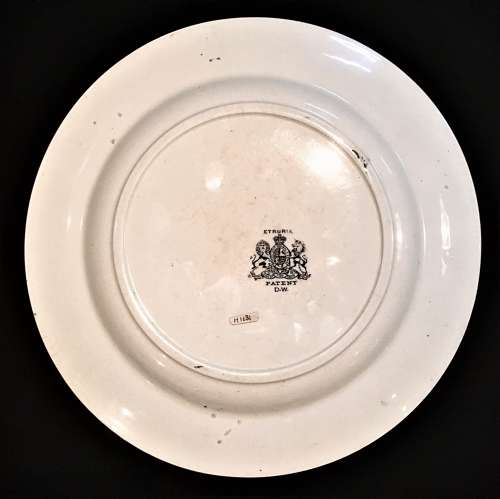