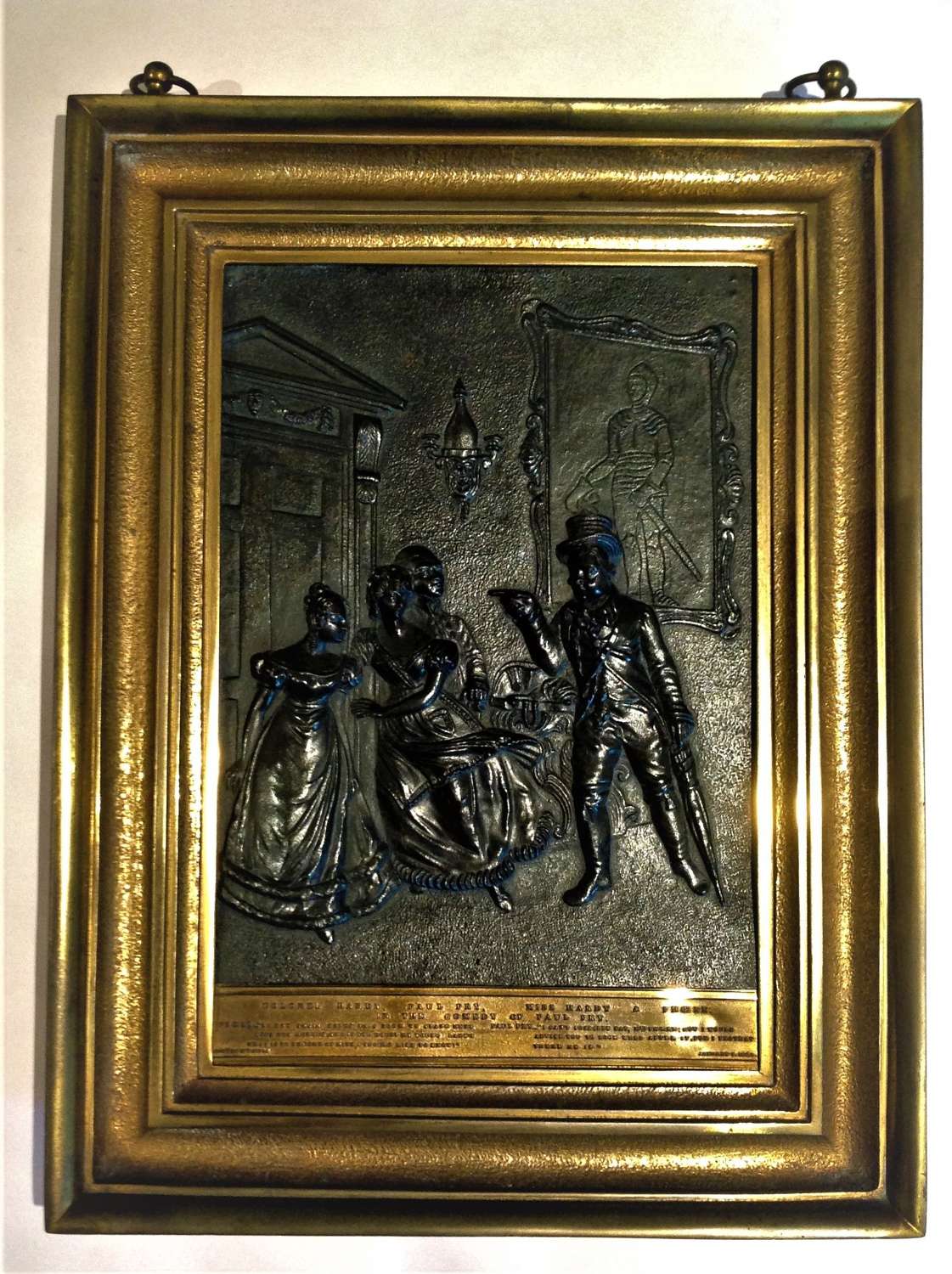 Bronze bas relief group portrait wall plaque, depicting an interior with a full-length portrait in armour on the wall behind. John Liston as Paul Pry, smartly dressed and wearing boots, breeches, fob, top-hat and frilled cravat, one hand on a furled umbrella, demanding entry to a room on the left behind the door to which the character of Frank Hardy is concealed. Madame Vestris as Phoebe runs to the support of her mistress Eliza, played by Miss Glover, who stands in front of the door barring entry.  Mr. Williams (or William Farren), as Frank's uncle Colonel Hardy, looks on bemused. Lettered on an ormolu strip beneath the image "COLONEL HARDY, PAUL PRY, MISS HARDY & PHŒBE.  / IN THE COMEDY OF PAUL PRY" under this quotations from the play "Phoebe: "No one shall enter this room we stand here / upon our honour: and, if you doubt my young lady's. / What is to become of mine, I should like to know? / Paul Pry. - "I can't possibly say, Mrs Phoebe; but I would / advise you to look well after it, for I protest / there he is."

This highly unusual sculpture, depicting a scene from Act II: Scene 2 of the celebrated farce "Paul Pry", is a rendering into three-dimensions of a painting by George Clint A.R.A. Although the image clearly derives originally from Clint's painting (now in the V&A) [Fig 1], which was exhibited at the R.A. in 18271, William Mole probably based his rendering on the mezzotint made from Clint's painting by Thomas Goff Lupton (1791-1873) which was published on 1st July 1828 by Moon Boys & Graves of 6 Pall Mall (the same quotations appeared on the mezzotint).

The play "Paul Pry" was one of the "smash-hits" of theatre in the 1820's and became an early global stage phenomenon, through its successful transfer to theatres in New York and Sydney. The original London production starred a number of the biggest names in Regency theatre, including Madame Vestris and John Liston (in the title role). Liston's stage portrayal of Paul Pry was highly distinctive and, by all accounts, extremely funny: his characterization became so popular that images of Liston as Pry appeared in a variety of forms including prints, snuff boxes and china figurines. The Folger Shakespeare Library in Washington D.C. holds a collection of these, but there is nothing comperable to this bronze plaque.

The Mole family of metalworkers were descended from a German émigré craftsman, Hermann Mohll, who had moved to England to set up business as a swordsmith in Birmingham in the 1690's. William Mole, who published the plaque, is listed as a "Brass Founder, Bronzed Lustre & Lamp Manufacturer" in Bartholomew Street, Birmingham and in a partnership as "Mole and Day" at the same address in Wrightson's 1818 "New Triennial Directory, Birmingham: An alphabetical list of merchants, tradesmen and respectable inhabitants of the town".2 He had previously been in partnership with Benjamin Parkes but this arrangement had been dissolved in 1816.

In 1777, at the time when Matthew Boulton's Soho Manufactury was beginning the zenith of its production, Edmund Burke looked upon the rapidly industrializing Birmingham as being "the great Toy-Shop of Europe”3 (meaning that the city specialized the in the manufacture of luxury decorative objects in metalware). William Mole seems to have aspired to move away from simply manufacturing of decorative metalwork and take his business into the realm of an art bronze foundry. Writing in 1830, William West described William Mole's output as follows:

“Mr Mole has also a manufactory in Paradise Street, of bronzes, or-molus, &c. Some recent productions of this gentleman, do him great credit; his models from celebrated engravings, and the fine casts of them in bronze, or-molu &c. are beautifully executed and are a novelty in the market. Although the mode of producing fine bas-relievos [sic], in brass, copper &c. was practiced by the ancients, Mr. Mole has, however, revived the art, and adopted metal frames for the reception of these new and curious productions, and from the speciments already produced, they deserve attention and encouragement."4

This bronze here appears to correspond exactly with West's description of Mole as producing "models from celebrated engravings", however, no other example has been identified. The cost of producing such pieces (which, as William West observed, were "a novelty in the market") must have been enormous when compaired to the engravings on which they were based and, as such, the market for these "curious productions" must have been very limited. By 1831 William Mole seems to have entered into partnership with a relative, Thomas, and the two were advertising their wares as "Tho. & Wm. Mole; Furnishing Iron Mongers" at the "Pagoda Iron Foundry" in Adderley Street, Bordesley, Birmingham with a seperate showroon in Jamaica Row, Smithfield, Birmingham. By the late 1830's their business seems to have run into difficuties. The whole stock of the partnership was liquidated in October 1840, by which year William Mole had been imprisoned as an Insolvent Debtor in Birminham Gaol. By the middle of the 19th Century another branch of the family, Robert Mole & Sons, had become the biggest manufacturer of swords in Birmingham. 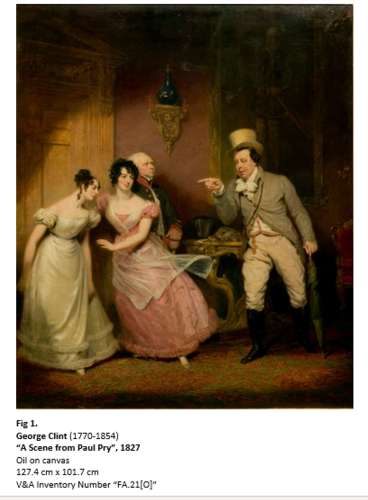