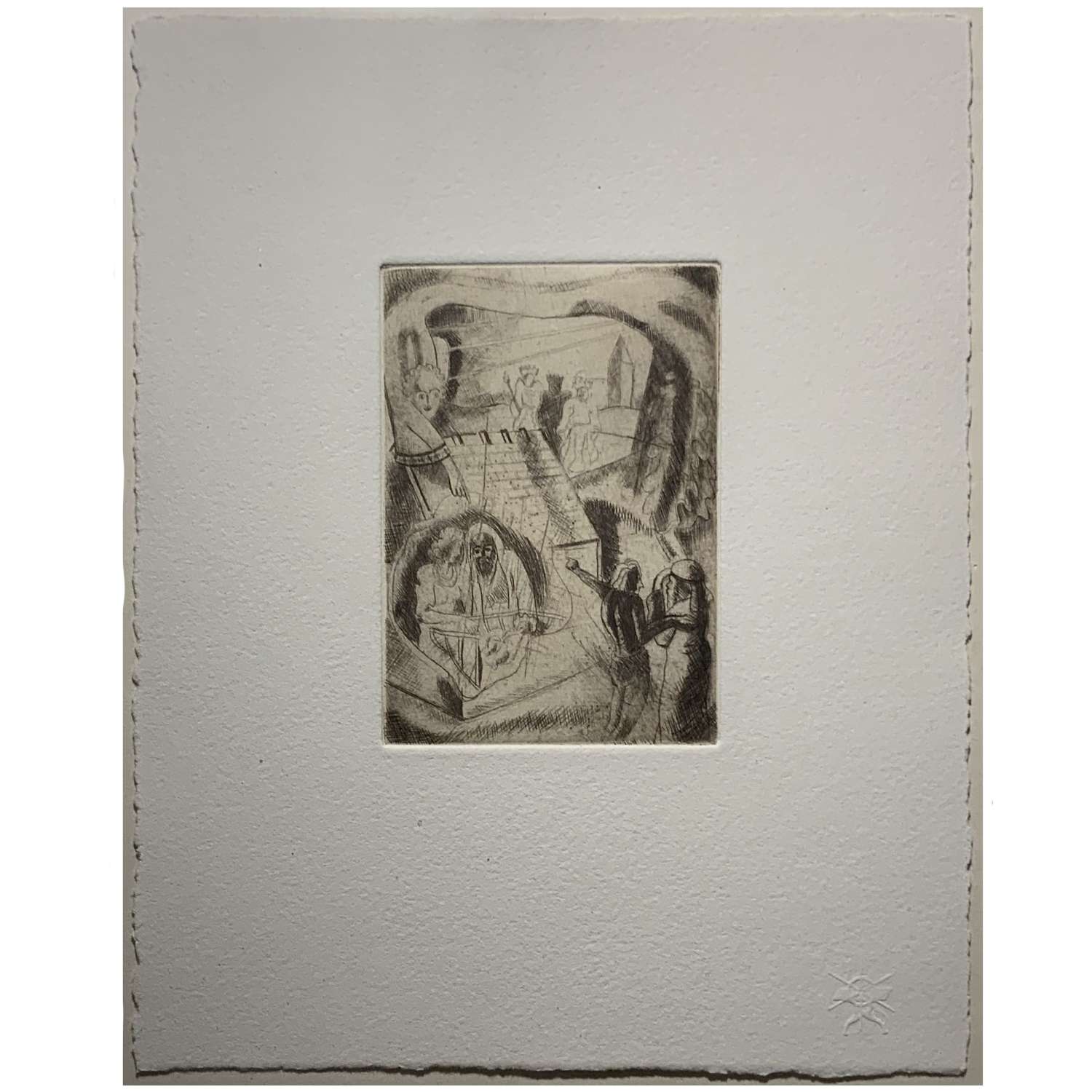 This intimate print by Albert Richardson, part of his very scarce available output, follows in the English mystical tradition of William Blake and Samuel Palmer and fuses this with a surrealist atmosphere. The image depicts a flying angel gesturing towards a barn in the left foreground, which is cutaway to show the Holy Family within. At the front of the image two shepherds are silhouetted, one in a loin-cloth is pointing towards the barn, the other, seemingly in a helmet or military beret, shields his eyes from the light emanating from the barn and the angel. In the distance, beneath the swooping comet-like tail of the angel's robes, the three kings approach, each wearing a crown, one also with a sceptre. A church with a spire is on the hillside in the distance.

The plate for this print was engraved by Albert Richards in around Christmas 1939, just as he was leaving Wallasey School of Art to attend the Royal College of Art, where he had been awarded a scholarship. Sadly Richards' time at the Royal College was curtailed by the escalation of the war: he enrolled on 4th January 1940 but was called up for active duty on 3rd April in the same year. In the short period he spent at the Royal College he was tutored by Paul Nash.

From April 1940 until the middle of 1943 Richards served as a sapper with the Royal Engineers, during which time he submitted several of paintings to the War Artist's Advisory Committee, who began to purchase his work. In December 1943 he accepted a commission to became an Official War Artist and also trained as a paratrooper.

On D-Day 1944 he parachuted into France with the 6th Airborne Division and took part in the battle to seize and disable the Merville Gun Battery which was thought to pose a threat to the landing sites at Sword and Juno Beaches. He advanced with Allied forces through France into the Low Countries painting whenever he could. On the night of March 5th 1945 Richards told his colleagues he was making drawings for what he hoped might become "the greatest picture of the war" (a painting of a night attack by the Allied troops on retreating Germany divisions near the River Maas in Holland). Just a short while later he was killed when his jeep, which also acted as his mobile studio, detonated a landmine in unmarked minefield.

At just 25 years old he was the youngest of the three official British war artists killed during the conflict (the others being Eric Ravilious (1903-1942) and Thomas Hennell (1903-1945)).

This print here comes from a posthumous edition of an unknown number of prints drawn from the original plate following its rediscovery in 1995.