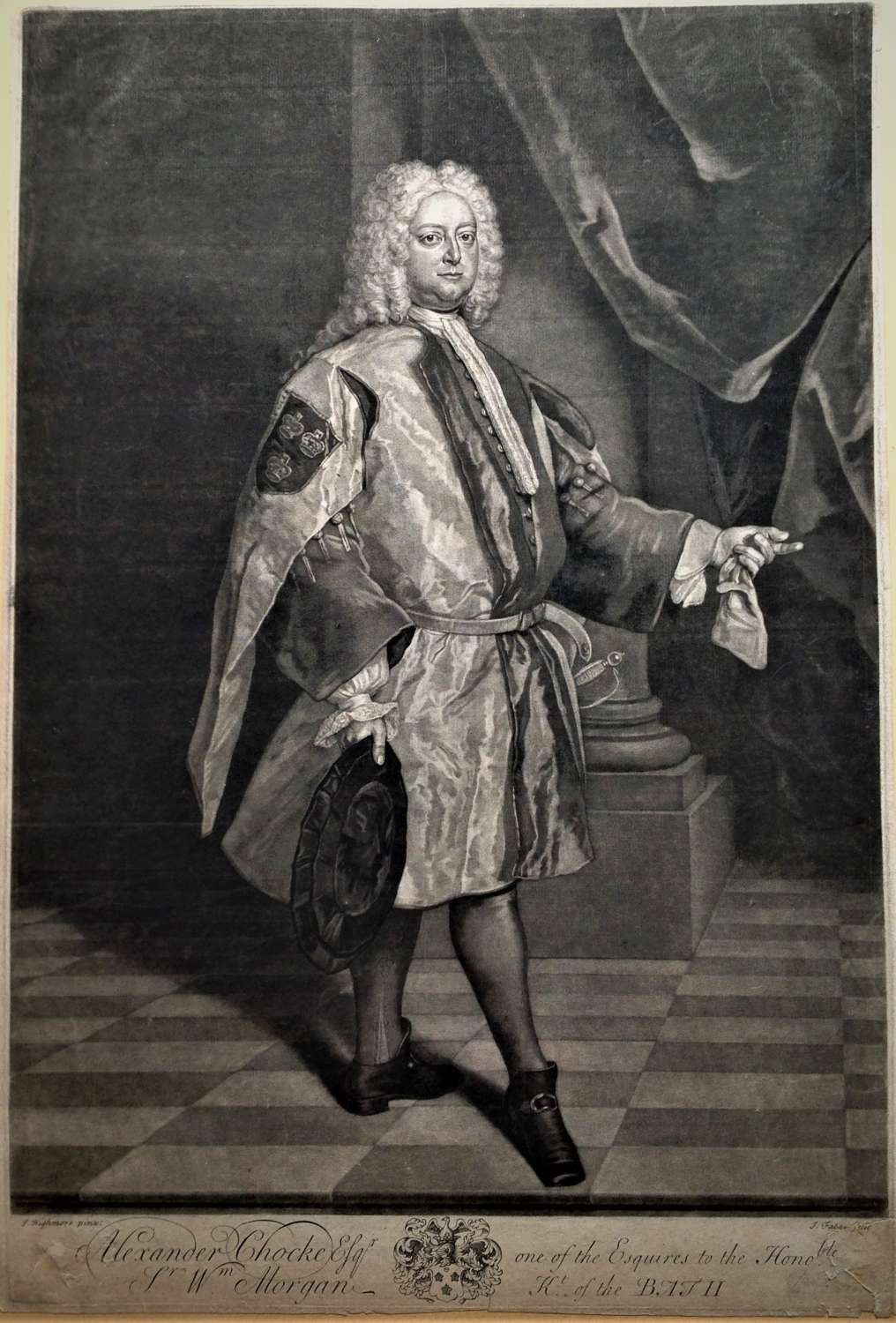 Lettered below the image with the title, continuing "one of the Esquires to the Honble. Sr. Wm. Morgan Kt. of the Bath", with a crest and "J. Higmore pinx. / J. Faber fecit".

An extremely rare mezzotint depicting Alexander Chocke in the regalia of an Esquire to a Knight of the Bath. The portrait by Highmore was commissioned at the time of the re-establishement of the order in 1725.

The Order of the Bath was refounded by George I in 1725 in order to expand the opportunity for political patronage (the Orders of the Garter and the Thistle being limited to 24 and 16 living members respectively). The Order initially consisted of the Sovereign (a Prince of the blood Royal as Principal Knight), a Great Master and thirty-five Knights Companion. At their installation each Knight Companion was allowed to appoint two Esquires, providing them in turn with an opportunity for patronage.

Alexander Chocke was a Receiver of Excise or (as mentioned in Musgrave’s Obituaries) a Clerk of the Debentures, in the office of the Auditor of the Exchequer. His family name was spelled either Chocke, Choke, Chokke, Chok or Chalk. He was appointed as an Esquire to Sir William Morgan of Tredegar (1700-1731) on Morgan's elevation as a founder Knight of the Bath in 1725. The mezzotint commemorates this event and Chocke is depicted in the Order's robes. At this stage the regalia was still ad hoc and the embroidered badge on the cloak (of three crowns within a shield) can be seen to be in a different configuration to that which was later adopted as the formal badge of the Order.

The artist Joseph Highmore was de facto official artist to the Order of the Bath and portrayed a number of the early knights and officers in their robes. Along with many members of the Order, Highmore was a Freemason and in December 1727 he was made one of the Grand Wardens of the United Grand Lodge of England, at the same time that Alexander Chocke was elevated from Senior Grand Warden to Deputy Grand Master.

Chocke was buried in St. Margaret’s Church, Westminster on 29 January 1737.

The British Museum holds copies of this print and a further copy is held by the United Grand Lodge of England. However, it is exremely rare with no copy held by the National Portrait Gallery or any other major institutional collection.