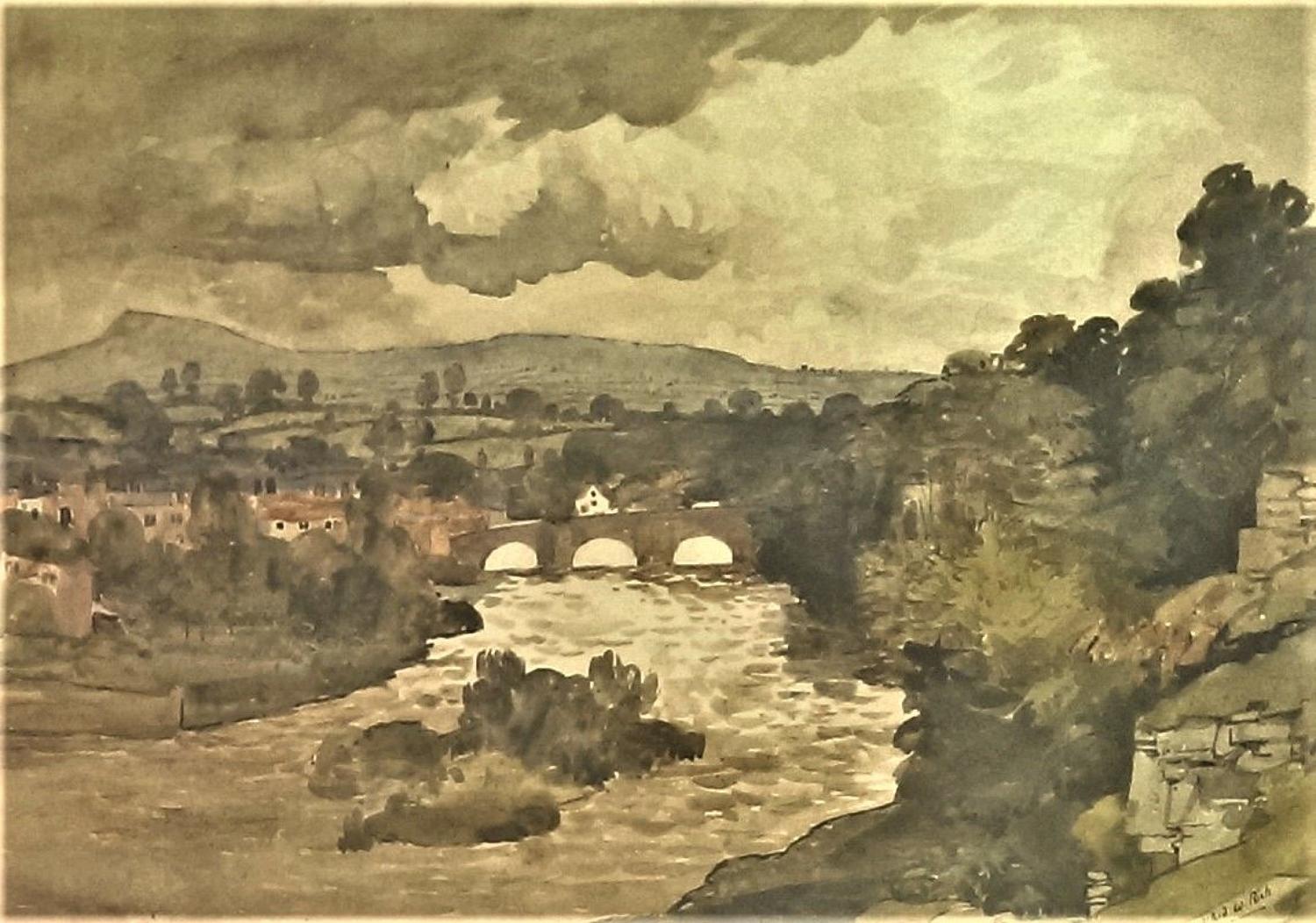 This work will be included in the forthcoming Alfred William Rich catalogue raisonné.

Alfred W Rich wrote of Shropshire that, “To paint and describe the beauties of this county a lifetime would be required.”1 He exhibited eight or so works specifically depicting Ludlow at the New English Art Club between 1912 and 1920 and several others which were painted in the vicinity of the town.

This view of Ludlow is looking approximately north-northeast from above the River Teme at Whitcliffe/Ludford; the main part of the town and its castle are out of view to the left. The artist has focused on the 15th Century Ludford Bridge in the centre of the image with the Clee Hills in the distance; the distinctive profile of Titterstone Clee is particularly prominent. Rich commented that:

“The cliff rising from the river on the opposite side from the town affords a fine vantage ground from which to see the town, castle, and the two bridges.

The old bridge is very fine. From the cliff it is the centre object of many fine features, especially when the weather is stormy, the distant hills making a grand skyline…” 2

“The Old Bridge, Ludlow” is rendered in Rich’s loose, late style and in the concentrated earth tones with which he is particularly associated. It was almost certainly completed en plein air: there are signs of raindrops having landed in the flat areas of watercolour wash whilst they were still wet. In this way the artist actually incorporates the changeable English weather within the work, adding to the overall effect of the picture (as can be observed in other paintings by A. W. Rich). Rather than being slavishly accurate in his draughtsmanship, Rich's aim was always to try and convey an emotional response to the scene.

This work was one of three Ludlow subjects chosen by Ernest Gladstone Halton (1874-1958) to illustrate his 1915 article on the artist, where it was described as possessing “many admiral qualities, notably the effect of the heavy clouds upon the landscape, a problem which only the ablest landscape painters have mastered satisfactorily”.3  Another work illustrated in the same article shows an almost identical view but from a slightly higher vantagepoint.

Although Rich did not exhibit a Ludlow work at the NEAC until 1912, he recalled an incident when painting in the town which suggests that he had visited as early as 1906 (or possibly earlier), in the company of his friend and colleague Philip Wilson Steer (1860-1942). Steer’s “Children playing in a park, Ludlow” 4, begun in 1906, has a very similar viewpoint to that chosen here and, in addition, seems to depict a specific incident which Rich was to recall later when describing a day’s painting in the Shropshire town (Rich’s own painting has not yet been identified):

“One stormy afternoon I had been wandering about seeking a subject to paint but finding nothing to suit my particular fancy of the moment, when my attention was suddenly arrested. I was on the brow of the cliffs overlooking the river and town. A heavy cloud mass was overhead, and under it the distant hills were lit up with a beautiful pearly warmth, the town with its castle and trees being richly sombre in the middle distance. On the cliffs - the top of which formed my foreground - were gathered a little group of children, whose bright attire just caught the last rays of the setting sun, and was in brilliant relief against the dark castle and woody middle distance. This group occupied the left middle of my picture, and was the key of the situation. I worked very quickly and was able to finish completely before either the sky effect altered or the children had gone.” 5

The first owner of this work was the Sussex grain magnate Moses Nightingale (1861-1934) who owned a number of works by Rich and was a noted patron of Henry Herbert La Thangue (1859-1929). 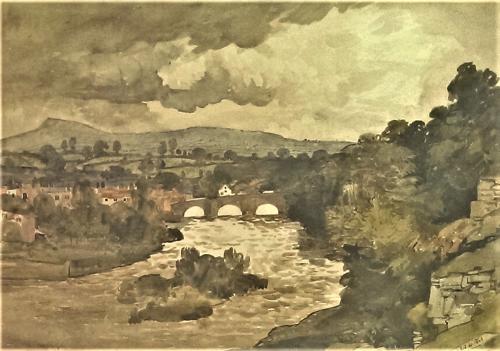