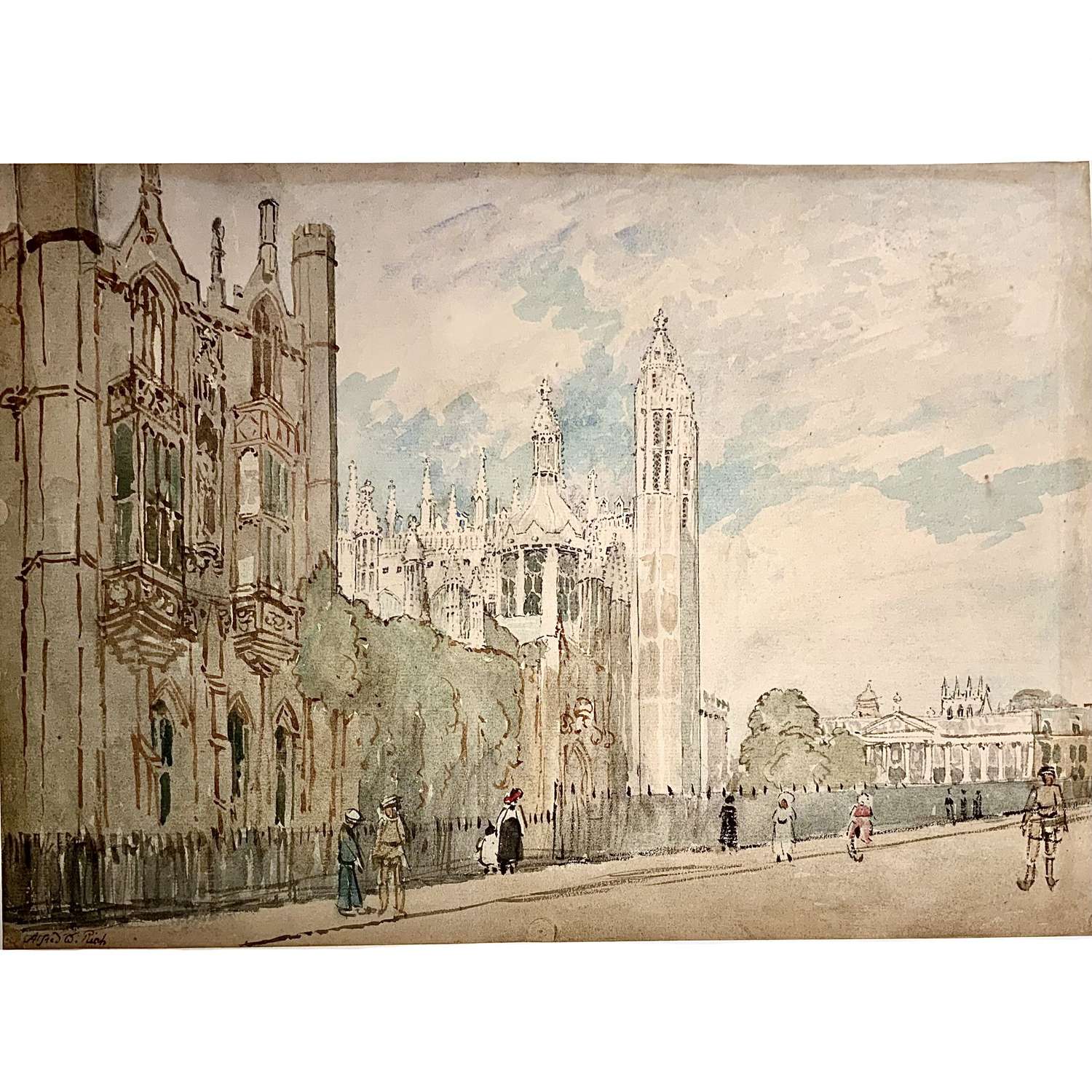 Literature:-
This work will be included in the forthcoming catalogue raisonné of the work of Alfred William Rich, currently in production.
An unpublished letter from A.W. Rich to Claud Lovat Fraser (1890-1921) held in the Special Collections Department, Bryn Mawr College Library, Pennsylvania, U.S.A.

Alfred W. Rich exhibited two pictures of Cambridge colleges at the Summer Exhibition of the New English Art Club in 1918. Around this time Rich was in correspondence with the younger artist Claud Lovat Fraser (1890-1921), who had recently been invalided back from France, suffering from shellshock and having been gassed, and was now working in the propaganda department for the War Office in Hounslow.

Lovat Fraser, unsurprisingly, seems to have been in very low spirits and Rich endeavoured to encourage him to get about preparing to exhibit his own work once again. In one of the unpublished letters which has survived, dated to early 1918, Rich writes "I have had a rare fortnight's chirp at Cambridge: lovely!" [1] and illustrates the page with what he describes as a "chirrup" (being, in the artist's parlance, a small "cheer-up!" image, painted within the body of the text). This is almost an exact miniature painting of this scene of King's College Chapel [see Fig.4].

Although far from being a "War Picture" the image, as with so much of Rich's output, is not simply a generic picturesque view of a famous landmark. It captures the timeless nature of the scene - and is clearly indebted to earlier masters (in this case there is a clear influence of Thomas Girtin (1775–1802) in the handling of paint and the usage of laid paper) - but it is also very much rooted to its own age. As with so many people at the time, the artist had been directly touched by war. He had lost cousins in the conflict and his nephew Captain George Berney, a former full-back for the Harlequins, had been killed in action aged 25 at Khuweifsch, Palestine in November 1917, having survived the Gallipoli Campaign. A less casual observation of the simply rendered figures reveals that two of the people depicted are wearing army khaki service-dress uniform with officers' Sam Browne belts and cross-straps and with military puttees at their ankles. A poignant juxtaposition between the couple to the left, who may be sweethearts or possibly a mother and a son, and the child and the mother walking hand-in-hand nearby might also be inferred. This seems to add a pathos to the image; a subliminal reminder to the viewer of the swiftness with which childhood passes: one moment you walk hand-in-hand with your mother, the next you are saying farewell and going off to war! Two of the other figures near the trees may be nurses (one in a red cape and another in a white wimple), another lady may be dressed in black mourning. However, the onlooker must construct their own narrative: is the additional uniformed figure on the right just a passerby, are they waiting at a discreet distance while their comrade says farewell to their mother/sweetheart, or are they waiting while a colleague is conveying some dreadful news? We can only guess!

As always Rich believed the "idea" of a picture was what made an image successful. The image should work as a picture but there should, ideally, be another more cerebral layer, relevant to the particular time and place of creation. It is interesting to note the calico sacking which has been erected as a screen outside the chapel. It is possible that this has been put up ahead of a planned removal of the cast iron railings [Fig.6] to help with the war effort? Specific details like this place Rich's work very much in its own time and space.

It is also fascinating that in the particular letter to Lovat Fraser in which the King's College Chapel image appears, Rich asks whether there might be a chance of the celebrated patron Baroness Catherine d'Erlanger (1874–1959) seeing his work. His question is very striking, "I hear she is a looker after the work of modern men, who are not just the worst of the worst, may I put myself in this category?" At a stage in his career when he could definitely be considered successful, he evidently felt a degree of self-deprecating modesty. He also clearly considered himself to be a "modern" artist!

The view is taken from the corner of King's Parade and Benet Street looking north towards the Senate House. The view remains largely unchanged to this day [Fig.5], barring modern street furniture, but it can be seen that a certain amount of artistic license has been used with regards to the positioning and perspective of the oriel windows on the façade of Scott's Building (to the left (designed by Sir Giles Gilbert Scott)) in order to ensure that the niche with the statue of King Henry VIII could be satisfactorily included within the composition. 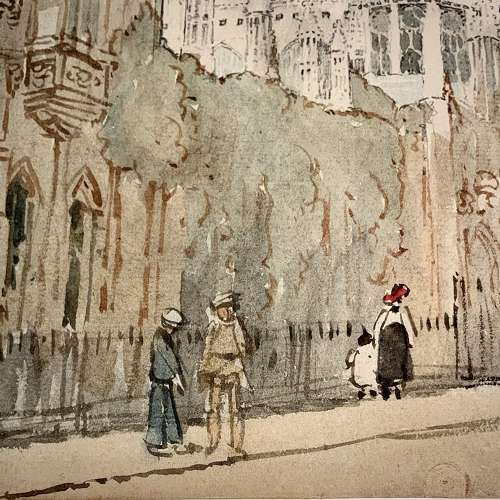 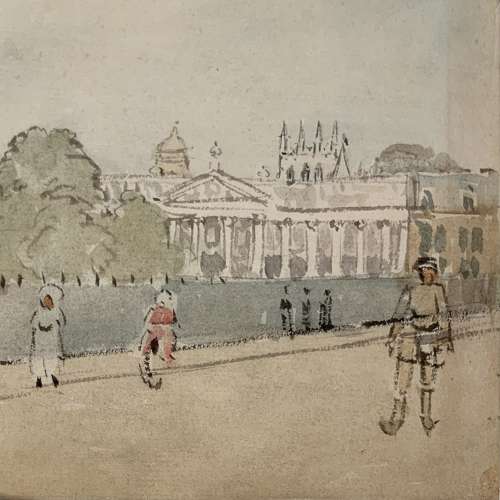 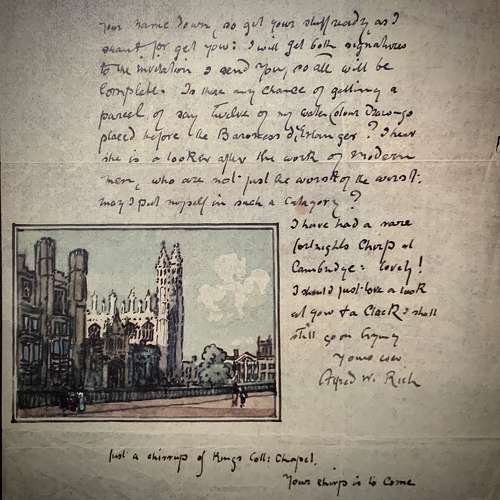 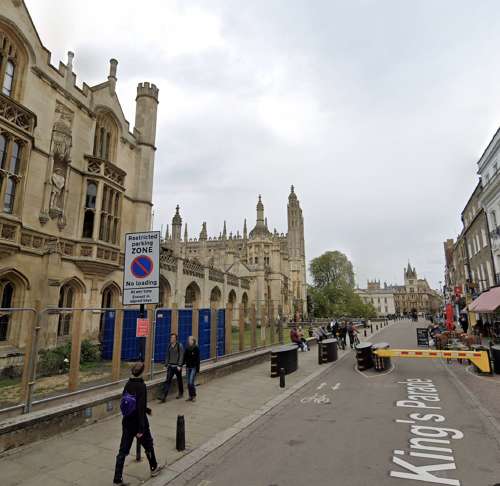 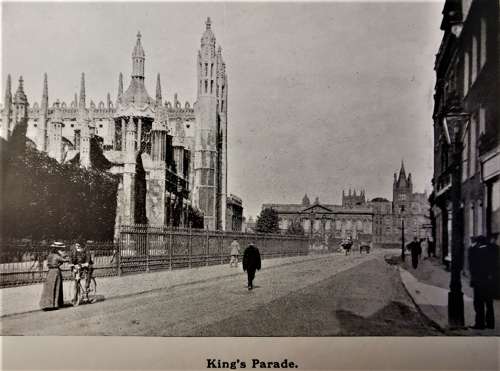