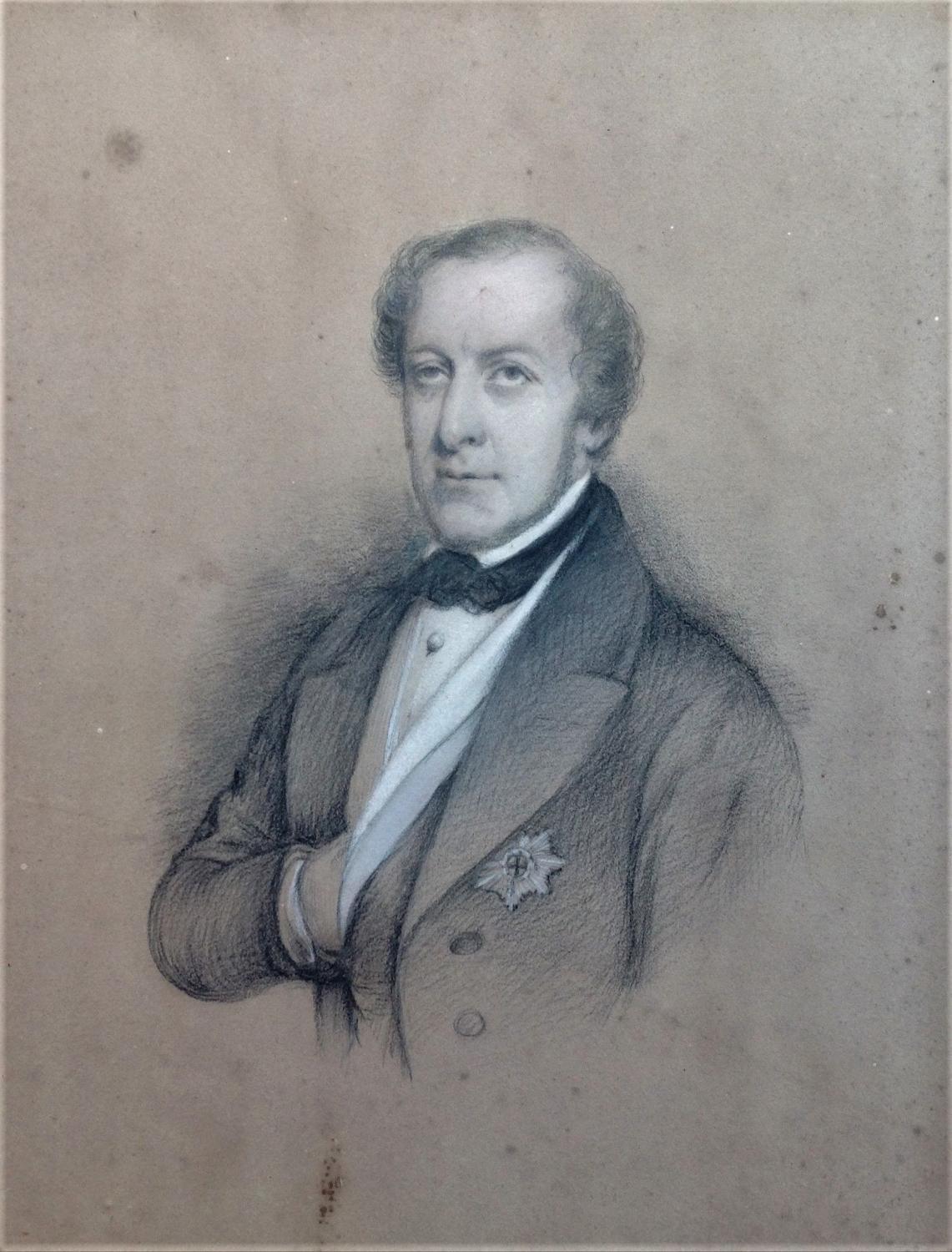 An original finished portrait drawing, preparatory to Baugniet's lithograph of William, 6th Duke of Devonshire which was printed by M. & N. Hanhart in 1852. The pose chosen by Baugniet, is based on that of a full-length portrait of the Duke painted by Sir Francis Grant PRA (1803-1878) in 1850, which hangs at Chatsworth. There are various minor differences between the drawing here and the final issued print. In 1852 the Duke also commissioned from Baugniet a further informal Cavendish family group portrait, with the Duke sitting in the Palm House at Chatsworth, surrounded by his closest relatives1. This was also published in a lithograph issued by the same printers. Both lithographs are scarce and no other preparatory drawings for them have been identified.

The son of William Cavendish, 5th Duke of Devonshire and Georgiana Cavendish (neé Spencer) the younger William succeeded to the dukedom in 1811 at the age of 21. His parents' unconventional marriage and his own thwarted affection for his older cousin Lady Caroline Lamb, seem to have ensured that he himself never married and earned him the epithet the 'Bachelor Duke'.

Although a Whig grandee who served as Lord Chamberlain to both George IV and William IV, Devonshire's interests were mainly cultural rather than political. He represented the king at the coronation of Nicholas I as Emperor of Russia in 1826 and was made a Knight of the Garter in 1827 (the order he wears here in this portrait). A great connoisseur he added hugely to the historic collections in his family home at Chatsworth and was one of the most important patrons of Sir Edwin Landseer (1802-1873). He spotted the talents and championed the skills of Sir Joseph Paxton (1803-1865) which ensured the grounds at Chatsworth also became some of the most celebrated in the country.

Charles Louis Baugniet was a portraitist and lithographer from Belgium who had been court painter to the Belgian Royal Family. In 1843 he moved to London and became a leading society portraitist. Despite the invention and emergence of photography as a means for capturing a likeness during this period , Baugniet's lithographs retained a gravity which ensured they remained a fashionable way of circulating an image. Baugniet recorded the likenesses of many of the most celebrated and influential individuals in Belgium, France and England. He produced a lithographic portrait of Prince Albert in 1851 which was issued by Day & Son, the lithographers to the Queen.