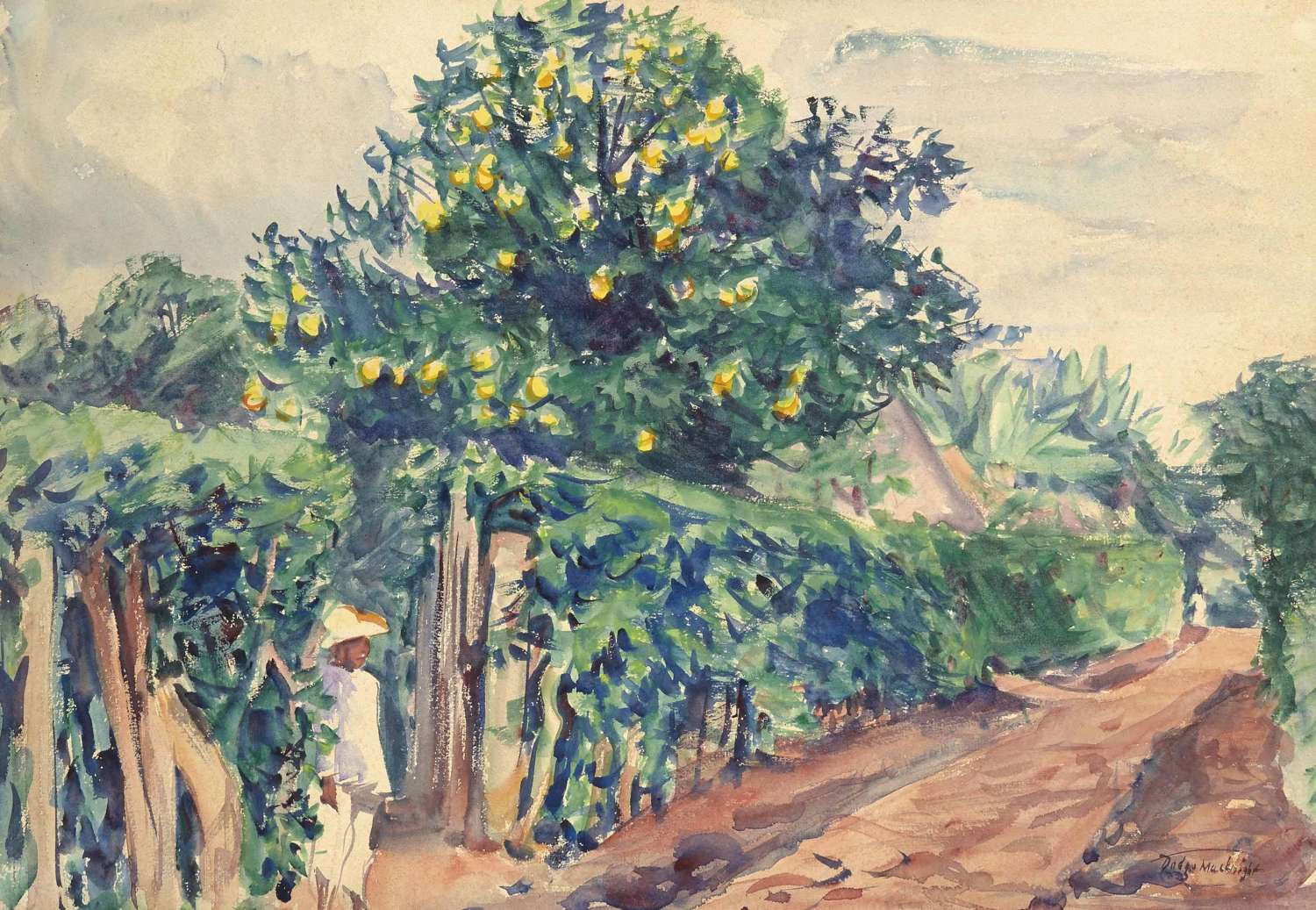 By December 1883 the budding American artist Dodge Macknight, then aged 23, had saved enough money to travel to Paris and enrol in the studio of the French academic painter Fernand Cormon (1845–1924). In Cormon’s studio he met an eclectic mix of emerging talents of many different nationalities. He became particularly friendly with the Australian painter John Peter Russell (two years his senior). It was through Russell that Macknight met Vincent Van Gogh at Cormon’s studio in March 1886.1 Russell ultimately painted portraits [see Fig 1] of both artists (who bore a striking resemblance to one another).

Macknight spent 14 years travelling in Europe and North Africa. In 1892 he travelled to Spain and stayed there, intermittently, until he felt obliged to leave and return to the USA during the Spanish–American War of 1898. In March 1894 he wrote a long, lyrical article for the Boston Evening Transcript entitled "Impressionist Notes, An American Artist in Spain” in which he recorded his observations of life and the changing of the seasons on Spain’s Orange Blossom Coast:

“It is late winter. From my south window I look out over the top of my yellow-spangled lemon tree upon the huerta [orchard] of Orihuela”.2

Macknight’s time in Spain had a profound influence on him as an artist: the bright light, heat and colouring of Spain encouraged him to make use of a dramatic palette which he had finally mastered and which he had undoubtedly absorbed from his association with Vincent Van Gogh.3 “Limonero, Orihuela” shows a great affinity (particularly in the observation of the figure in the gateway) to the work produced by Van Gogh in Arles around 1888 (such as “Entrance to the Public Gardens” (Phillips Collection, Washington, DC)). Macknight seems to have been blissfully happy in Spain and wrote “'tis Paradise! 'Tis an ecstatic fancy of boyhood's days; a landscape let fall from the Arabian Nights!”4 While in Orihuela he married Louise Queyrel, who had been the governess to John Russell’s children.

He first showcased Spanish scenes in 1894 at the Saint Botolph Club in Boston and his US dealers, Doll & Richards, showed Spanish subjects in 1897, 1899 and 1905. Of the 44 pictures by Macknight exhibited alongside works by Winslow Homer and John Singer Sargent in Boston in 1921, four were Spanish scenes. In 1904 he presented a Spanish scene (which is very closely related to “Limonero, Orihuela” and may well date from the same period) to his great Bostonian patron Isabella Stewart Gardner [Fig 2]. This hangs, along with other works by him and Sargent, in the “Macknight Room” of her museum (which she named in his honour) [Fig 3].

After Macknight’s return to America he continued to seek out warmer climes in Mexico, Bermuda and Jamaica. His ability to capture hot weather in watercolour was noted by the art critic of The Boston Herald, who commented on his “distinct achievement in the matter of rendering the incredibly brilliant colouring of the tropics under the dazzling son”.5

Macknight, along with Homer, Sargent, James Abbott McNeill Whistler, John Marin and Charles Demuth is considered to be one of the greatest American painters in watercolour. Marsden Hartley, the leading American Modernist painter, poet, and essayist, noted Macknight's exceptional ability to paint heat and held he had a “virility of technique” which, in Hartley's opinion, elevated Macknight above Sargent and almost above Homer.6

Though he lived until 1950, Macknight did not paint after the death of his wife in 1931. Their son John, who having been injured during WWI played principal flute in the Cleveland Orchestra, died in 1928. Dodge Macknight appears to have been overwhelmed by grief, this and the fact that he painted exclusively in watercolour are probably the reasons why he is less well known than some other American modernists of the period. Arguably, he never quite achieved the brilliance in his later work than he showed in such pieces as “Limonero, Orihuela”, produced around the fin de siècle.

NOTES
1. After Russell’s earlier introduction in Paris, Macknight socialized with Van Gogh (who was seven years his senior) in Arles in 1888. Macknight described Van Gogh as “a stark, staring crank, but a good fellow” (Letter from Macknight to Eugène Boch 17 April 1888). Van Gogh in turn described him as “much better than the ordinary run of Yankees” (Letter from Vincent to Theo Van Gogh Arles, around April 25, 1888). They frequented brothels together and there was talk of them sharing a studio (Letter from Vincent to Theo Van Gogh Arles, July 8/9 1888) but they appear to have fallen out at some time before Van Gogh’s death.

2. See “Impressionist Notes, An American Artist in Spain — Along the Huerta [orchard] of Orihuela — Some Spanish Landscapes With Figures” Boston Evening Transcript, March 24, 1894.

3. Van Gogh noted that “the new colour theories” where “tormenting” Macknight and he wanted to help the American artist to master “his new palette”. Van Gogh thought that if they spent time together “we would benefit, I think, on both sides” (Letter from Vincent to Theo Van Gogh, Arles, May 4 1888).

6. Hartley, Marsden (1877-1943) “Some American Watercolorists” in “Adventures in the Arts: Informal Chapters on Painters, Vaudeville, and Poets”, Boni and Liveright, New York, 1921 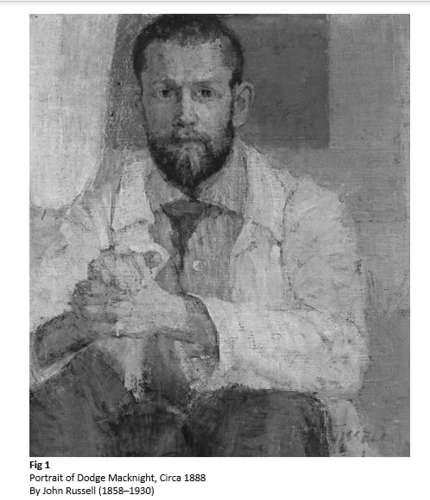 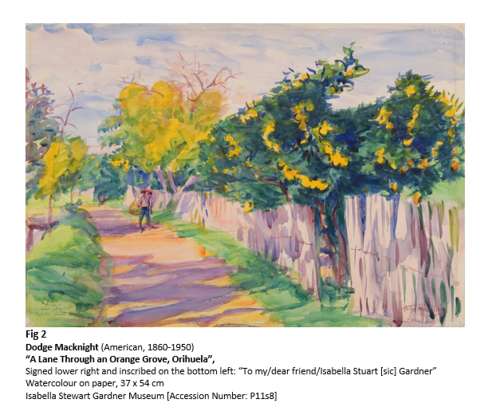 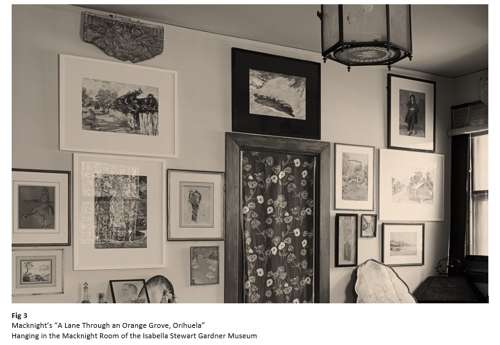