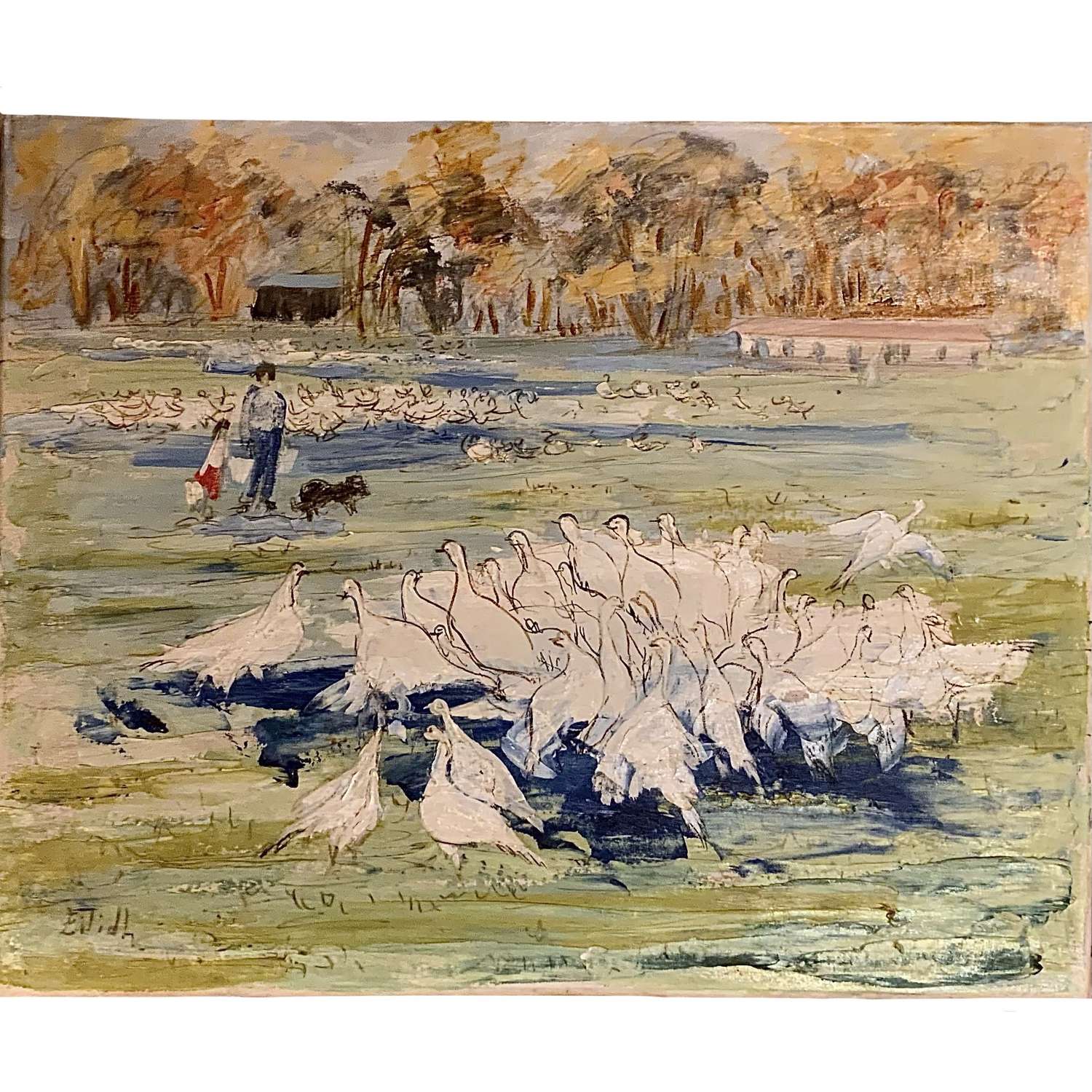 Eilidh Armour-Brown (née Barbara Bianca Eilidh “Bunty” Barnardo) (1913-1994) painted and wrote under her maiden name Eilidh Barnardo. She studied painting at St Martins and Chelsea Schools of Art, at Atelier-école de Georges Aubert in Lausanne, in Paris and Glasgow, often signing her work simply with her distinctive first name “Eilidh” (as here). Although in many published sources her dates are listed as 1911-1994 they should actually be 1913-1994 (the dates we have used).

Eilidh was a great-niece of the famous Irish philanthropist Dr Thomas Barnardo (1845-1905) (founder of the eponymous children’s homes). She was born in London and raised in a grand house in Lancaster Gate and in the Western Himalayas, where her father Lt.-Col. Frederick “Barnie” Adolphus Fleming Barnardo, C.I.E., C.B.E. (1874-1962) served with the Indian Medical Service. She was the second of five children (four sisters and a brother). Her brilliant elder sister Elizabeth “Bettie” Barnardo (1911-1987) married Christoph von Fürer-Haimendorf (1909-1995) and, together with him, became an extremely distinguished ethnologist.

In 1934, at the age of 21, Eilidh married John Armour Hally Brown (1910-1938), heir to the Brown & Polson flour-mills fortune (their engagement was announced in The Times on 3rd May 1934). They soon had two daughters (Fiona b.1935) and Ashlyn (b.1938). Tragically, only eight days after the birth of their second child, John was suddenly taken ill and died while they were staying at his family’s home at Craignahullie, Skelmorlie in North Ayrshire. At the outbreak of the war Eilidh traveled to the USA, taking her young girls with her, to seek sanctuary with her late husband’s maternal aunt in California (her husband’s grandfather was the American inventor Charles D. Seeberger (1857–1931), the designer of the escalator). A number of tragedies took place during the war years: on 3rd May 1941 her brother-in-law Charles was killed flying over Boulogne with the RAF and in 1942 her talented younger brother Freeman Frederick Thomas Barnardo (b.1918), educated at Eton and Magdalene College, Cambridge, was killed in action whilst serving with the 2nd Dragoon Guards (The Queen's Bays) during the Second Battle of El Alamein. On hearing the news of her only son’s death, her mother, Violet, leapt into the Thames in despair and took her own life by drowning (she is buried in Shiplake churchyard with a memorial to her son on her gravestone).

Eilidh returned to England in 1945 and the following year she was remarried to her husband’s younger cousin Peter Halley Armour-Brown (1913-1976). They went on to have two children together, a son Frederick and a daughter Rowan (1948-1996), who became an acclaimed luthier and violin maker (in whose memory the Rowan Armour-Brown Memorial Trust was founded in 1999).

She and Peter ultimately settled at Leomansley House in Lichfield. She became chair, treasurer and Vice President of Lichfield Society of Artists, a founder member of Lichfield Arts Centre and was made a Freeman of Lichfield in 1992. Her work can be found in a number of collections including the Shire Hall Art Gallery in Stafford.

Eilidh Bernardo's paintings reflect her interest in travel and observing the world. There is often a sense of tranquility which belies the sometimes turmoiled circumstances of life. The picture here is full of charm and incident with the distant adult and child (and their dog) carrying buckets of feed towards an excited flock of geese. Her innovative, expressionistic mix-media style provides a great vitality to the flock of birds.