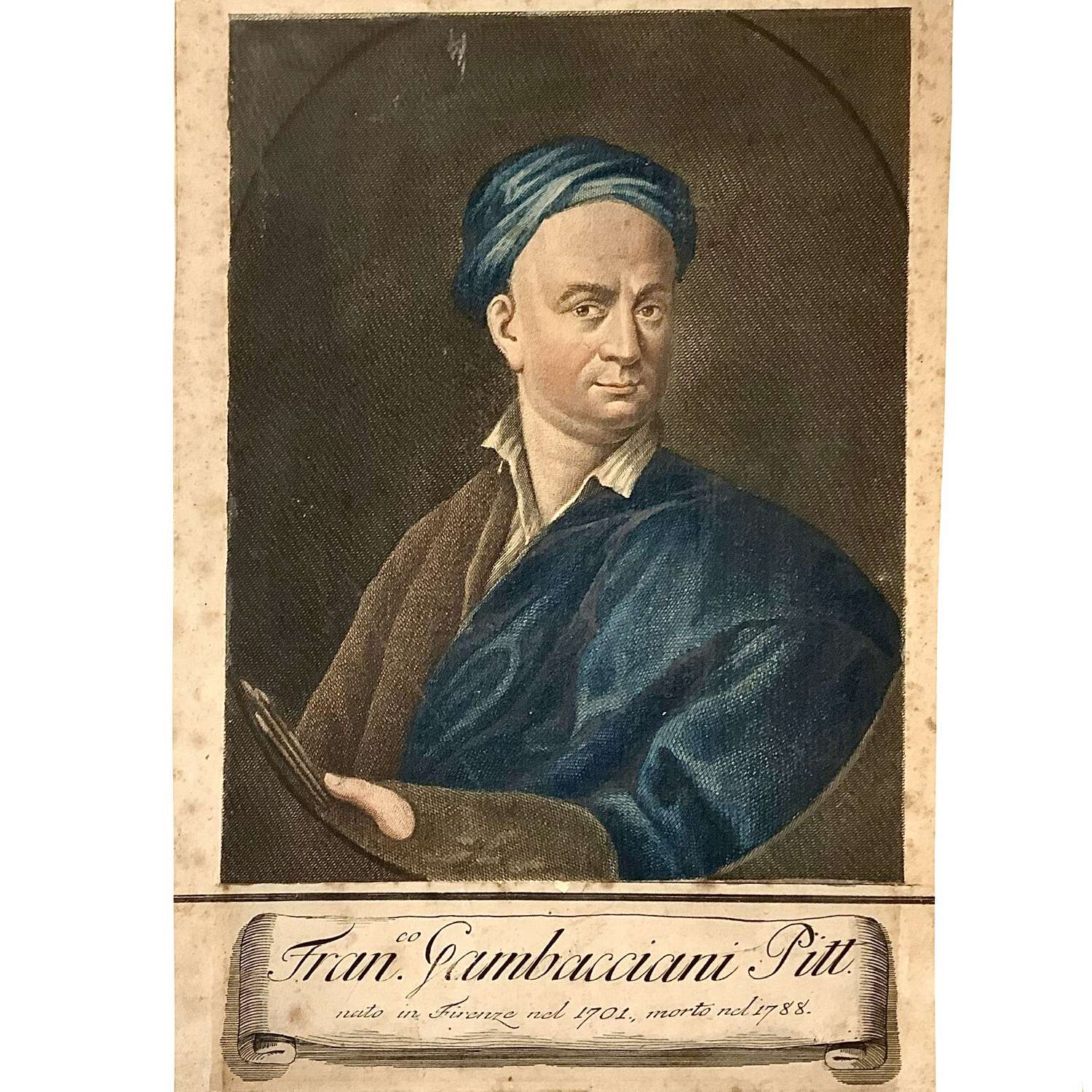 Francesco Gambacciani (1701-1788)
A very scarce print after a self portrait in
the Vasari Corridor of the Uffizi Gallery
Line engraving printed in colours
Published Circa 1791
Framed
Dimensions: 26 cm x 18.5 cm

Sitter draped, wearing a turban, half-turned bust-length looking to the left, holding a palate and brushes, within an oval. Lettered beneath the image within a feigned scroll with the title "Franco. Gambacciani Pitt.[ore] / nato in Firenze nel 1701, morto nel 1788."

A very rare print of this relatively obscure Italian painter after the self-portrait which can be found in the Vasari Corridor of the Uffizi Gallery in Florence [No.1681 in their 1890 Inventory]. The print was No.295 in the series of 324 prints attributed to Carlo Lasinio (1759–1838) published as "Ritratti di Artisti Eccellenti" by Nicola Pagni and Guidobeppe Bardi in Florence between 1790 and 1796. These prints are usually numbered with their place in the series (to the bottom right of the scroll) but were also available separately. That the print here is unnumbered indicates it was probably one of those copies which were available for separate purchase, rather than from a disbound copy of the series (now exceptionally scarce in all forms).

The Florentine painter Francesco Gambacciani (1701-1788) produced a number of works based on the Commedia dell'Arte for several distinguished patrons. He also produced religious paintings and his "Nativity" in the Chiesa del carmine has recently been restored.

Carlo Lasinio (1759-1838) taught engraving at the Accademia in Florence, becoming a Professor in 1800. He was one of the earliest printers in colour. The important series of prints after artists' self-portraits are attributed to him. Very few copies of this particular print have been indentified. Only a single copy has been located in an institutional collection: that being in the State Hermitage Museum, St. Petersburg [Inventory No. OG-273348]. The hermitage print is numbered '295' on the scroll indicating it came from a series rather than a separate off-print (as here). The differing border of this print also suggests it is an off-print. The bound collection of 108 prints from the series held by the British Museum see [BM 1879,1011.603-710] does not include this print. It was also absent from the collection of 80 prints from the series sold by Christie's as part of the Drue Heinz Collection (see Christie's, Lot 126, "The Collection of Drue Heinz, Townhouses in London and New York with interiors by John Fowler and Renzo Mongiardino", 4th June 2019 (the set of 80 there realising GBP 16,250)).