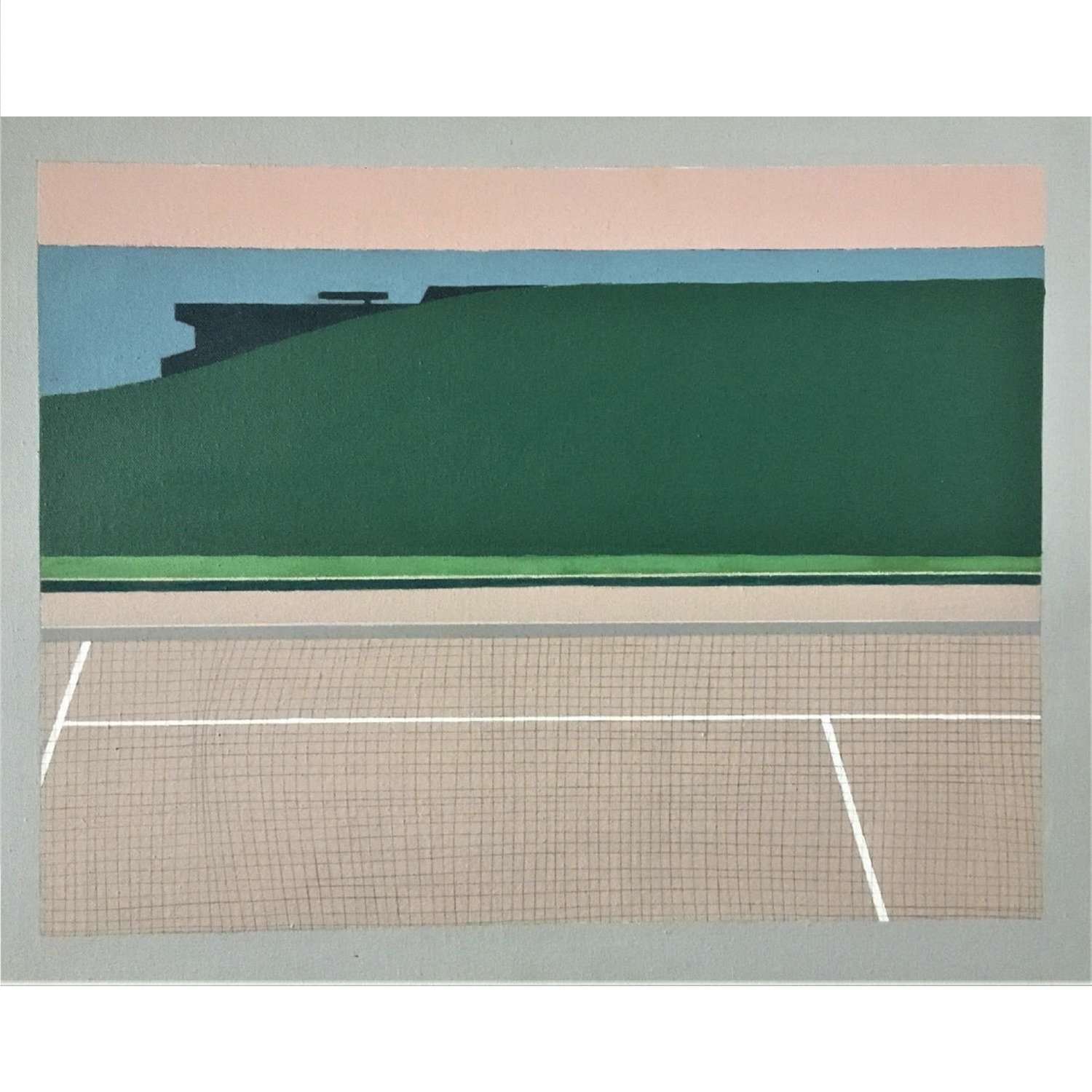 Guy Beggs was born in Durban, South Africa in 1947. He came to the UK to study fine art, first as an undergraduate at Maidstone College of Art, Kent from 1964-1968, then as a postgraduate at the Royal Academy Schools from 1968-1971 (during which time he won a number of prestigious awards including the "Turner's Medal", the "David Murray Prize", the "Landseer Prize" and the "Eric Kennington Drawing Prize"). Beggs spent a final year studying at Goldsmiths College, London from 1971-1972 and then had his debut one-man show at the Leicester Galleries on Cork Street the following year.

With regards to the present work the artist recalls that:

"I was very interested in the abstract design potential offered by contemporary subject matter, and remember noticing this one day in the formal layout of a tennis court. I recall that I did a number of drawings on the subject. "Tennis Court" was not site specific but an imagined court."1

The influence of David Hockney can possibly be discerned in "Tennis Court". Beggs was briefly tutored by Hockey at Maidstone College of Art before the latter's move to the USA.

Beggs went on to teach at Wimbledon School of Art and the SIr John Cass School of Art, where he became Head of Fine Art and subsequently Dean of the Sir John Cass Faculty of Art, Design and Manufacture. He now lives and works in London and Brighton, East Sussex. Beggs's work is represented in a number of distinguished private and public collections worldwide including: Tate Britain; The Museum of London; The Design Museum; Rochdale Art Gallery; Auckland Art Gallery Toi o Tāmak, New Zealand and Southern Alberta Art Gallery (SAAG), Lethbridge, Canada.

This work was bought by Mrs Paul Anka (Anne de Zogheb) (1942-2017) from the artist's 1973 Leicester Galleries debut (another buyer from the same show was Vincent Price (1911-1993) (who had studied Art History at both Yale and the Courtauld Institute)). Anne Anka was of Anglo-Lebanese descent and had enjoyed a privilaged upbringing in Egypt and Europe, surrounded by art. A Vogue cover girl and fashion model she was signed to the Ford Modeling Agency. In 1963 she married the famous Canadian-American singer-songwriter Paul Anka. As a lifelong collector and outstanding connoisseur it was natural for Anne Anka to accumulate a fabulous art collection. At the time of her death, as well as the piece here, Mrs Anka's collection in her Los Angeles home included major works by Andy Warhol, Christopher Wool, Gerhard Richter, James Rosenquist and Carl Andre. This work more than held its own in such illustrious company and remained in her collection her until her death in 2017.

Notes
1. Recalled in private correspondence with the artist October 2017.