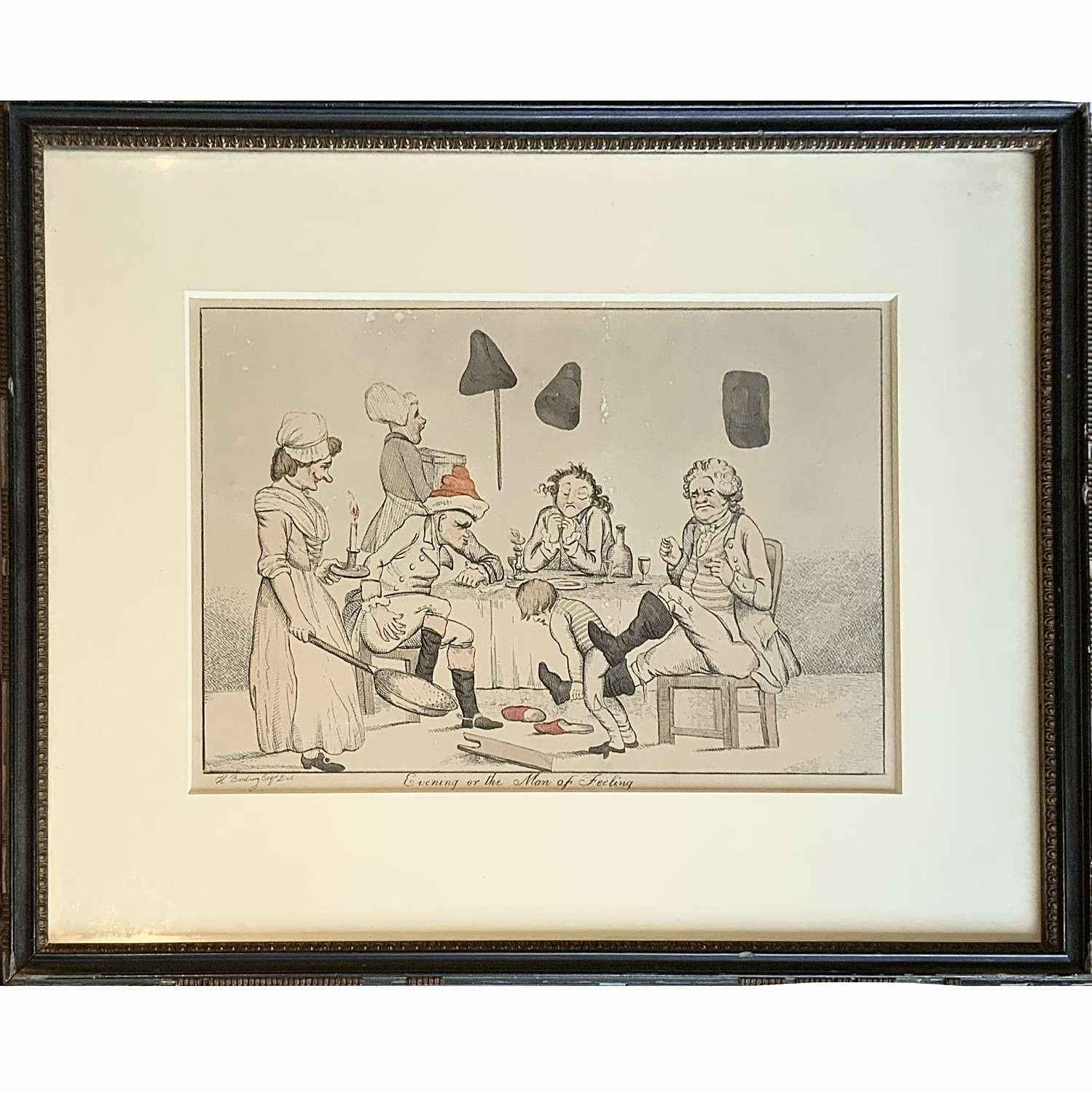 Henry William Bunbury (1750-1811)
"Evening or the Man of Feeling"
Probably engraved by James Bretherton (fl.1750-99)
Etching with hand colouring
Published Circa 1781
On wove

Lettered with the title "Evening or the Man of Feeling" beneath the image and "H Bunbury Esqr Del" (lower right).

Three men sit by a supper-table. A man on the right is having his riding boots pulled off by a boy who stands astride his right leg pulling hard, his back to the man, who is scowling and pushing the boy with his other foot; on the floor is a boot-jack (which has, presumably, proved useless) and a pair of slippers (which the man, seemingly, wishes to put on). A man on the left is still wearing riding gear and spurred boots but has changed into a velvet nightcap, he leans one elbow on the table holding his thigh in pain. A maid stands to the left with a candle in one hand, she has brought a warming pan which she holds near the man's foot to help ease his pain. On the far side of the table a third man leans both elbows on the table looking sad and pensive. Three hats hang on the wall, one with a stick beneath it, a bottle, a plate, three wine-glasses, and a candle stand on the table. Behind, a servant sporting a large wig carries items away.

The print is probably a reference to Henry Mackenzie's sentimental novel "The Man of Feeling" published in 1771, where the main protagonist is sensitive to the distress of others. The two men at the front of the image have clearly been in the saddle all day - one is now stuck in his boots and the other is in pain, still in his riding attire. As they try but fail to settle down to an evening of comfort, their companion at the back of the table senses their distress and is, accordingly, looking very sad. The humour lies in the ridiculousness of the situation and the fact that, as they are all in discomfort, it is hard to identify which is actually "the Man of Feeling".

Henry William Bunbury (1750 -1811) was from an aristocraticic Suffolk family. He was educated at Westminster School and St Catharine's College, Cambridge and pursued a career as an amateur caricaturist. In his day he was as well known as his contemporaries Thomas Rowlandson and James Gillray. He was younger brother of Sir Charles Bunbury (1740–1821), the celebrated Senior Steward of the Jockey Club who introduced both of Newmarket's horse racing "Classics", the 1,000 Guineas and 2,000 Guineas, to the racing calendar in the early 19th Century.