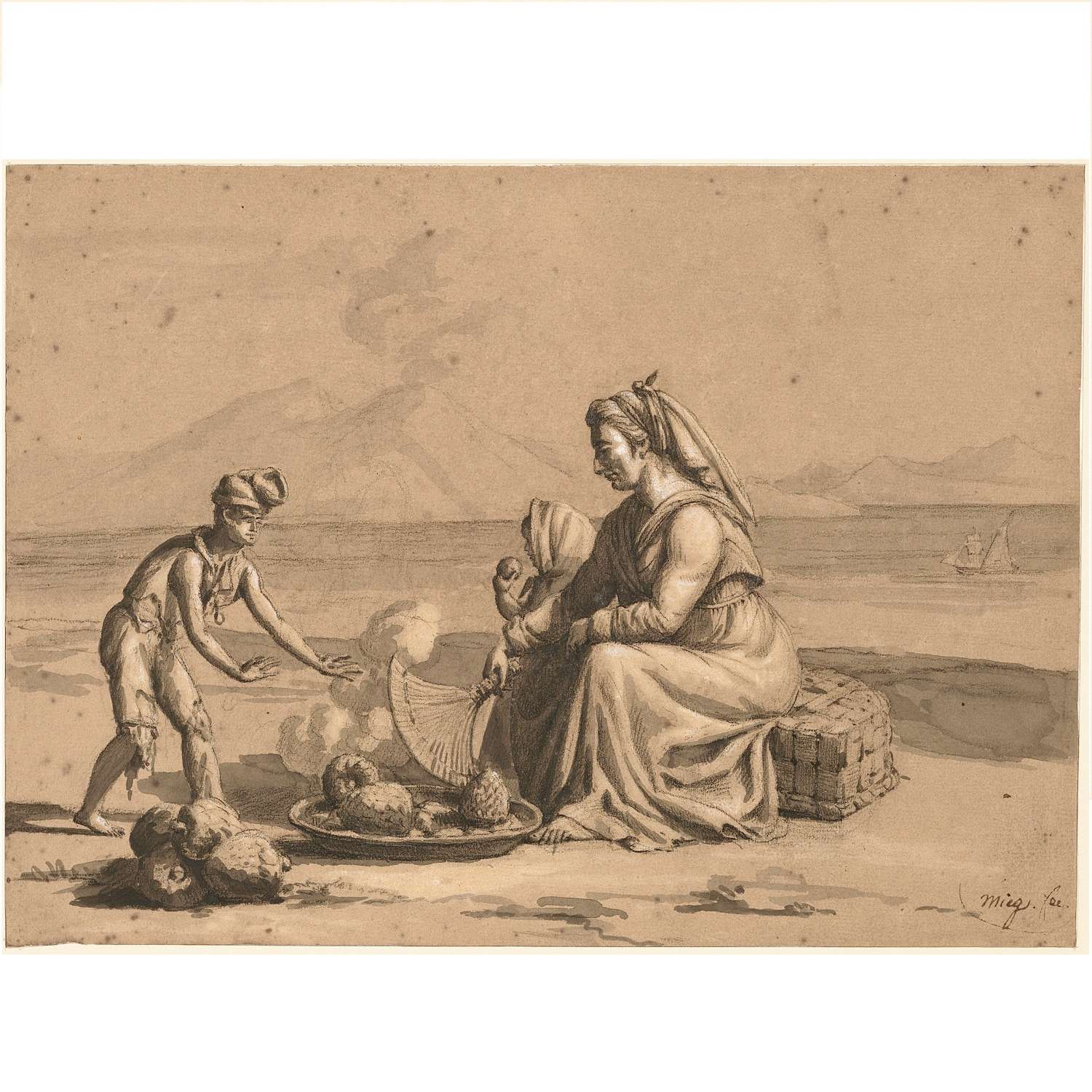 H: 21cm (8.3")W: 29cm (11.4")
SOLD
Jean Mieg (1 April 1791-27 April 1862)
“Neapolitans Roasting Artichokes” circa 1815
Signed lower right “Mieg fec[it].”
Black chalk and brown wash, heightened with white
On buff paper
21 cm x 29 cm
Considering what an important aspect of the Grand Tour the experience of different cuisines must have been, it is remarkable how few depictions there are of local delicacies being prepared in an authentic fashion.  Here the French artist Jean Mieg portrays a humble woman next to her children beside the Bay of Naples, blowing coals with a palm-frond fan as she prepares Carciofi Arrostiti (Roasted Artichokes).  We can be certain of this being a Neapolitan scene because the distinctive profile of Mount Vesuvius is smoking in the background. The artist has mirrored the smoke emerging from the volcano with that rising from the brazier.
Jean Mieg heralded from Mulhouse in Alsace-Lorraine, the eleventh and youngest child of Mathieu Mieg, a prominent and successful textile manufacturer of Swiss descent. The Mieg family lived in a grand residence in the middle of Mulhouse (now a historic monument known as Mason Mieg). Supported by his father "who dreamed of making him a great painter", Jean attended l’École nationale des Beaux-Arts in Paris from 1807 and afterwards made the customary journey to Italy in around 1814, possibly travelling with fellow artist James Pradier (1790-1852). During Napoleon's regime History Painting was especially encouraged, but Meig seems to have been less interested in academic styles than in recording ordinary everyday scenes (it was not until 1817 that the first Prix de Rome was awarded for landscape painting). By 1818 Mieg had returned to Mulhouse where, along with his brother Jean-Georges, he became more occupied with his family’s textile business, Mathieu Mieg & Fils, and seems to have largely forsaken painting. A number of his drawings, however, were used by the pioneering lithographer Godefroy Engelmann (1788–1839) (also from Mulhouse) as the basis for illustrations in his “Manufactures du Haut-Rhin” (an historically important series of lithographic portraits of factories, issued between 1822 and 1825).
Artichokes roasted on charcoals are a particular delicacy of the Campania region of Italy and they are especially associated with Naples. Indeed, this method of preparing artichokes is often referred to as “Carciofi Arrostiti alla Napoletana” (“Neopolitan-Style Roasted Artichokes”). In Campania they are eaten throughout the spring but they are the signature dish of Pasquetta (the Easter Monday holiday). Though the techniques used in this drawing show a debt to neoclassicism, and particularly to Jacques-Louis David's drawing style, Meig has given the gravity of his academic training to a lowly culinary subject. Whilst in Italy, Meig appears to have been particularly fascinated by cuisine, the Musée des Beaux-Arts, Mulhouse, holds a painting by him of an Italian market [Fig 1] which is unusual and ahead of its time for being an almost unique depiction of early 19th Century “street food” - with a pasta-seller serving spaghetti from a stall.  That painting is also identifiable as a scene in Naples as the twin peaks of Monte Somma and Vesuvius are again in the background. The lady and two children to the left of the Mulhouse painting (particularly the shabbily dressed boy in his distinctive cap) appear to be the same figures depicted in the drawing here and the upturned rectangular woven basket, on which the woman sits, also seems identical to the one being used as a seat in the Mulhouse spaghetti-vendor scene.
Literature:
Nicolas Pierrot, “Mulhouse, berceau de l’imagerie industrielle (Mulhouse, birthplace of industrial imagery)” pp 103–114 in “Hypothèses (Travaux  l'École doctorale d'histoire)”, Éditions de la Sorbonne, Paris, 2001
Georges Mieg, “Jean Mieg  un peintre mulhousien du XIXe siècle”, Archives Alsaciennes D’Histoire De L’Art, Strasbourg, 1923
Provenance:
Private Collection, UK 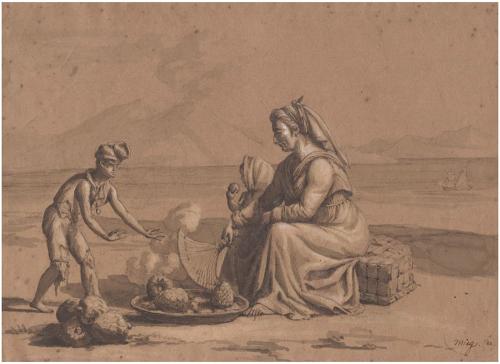