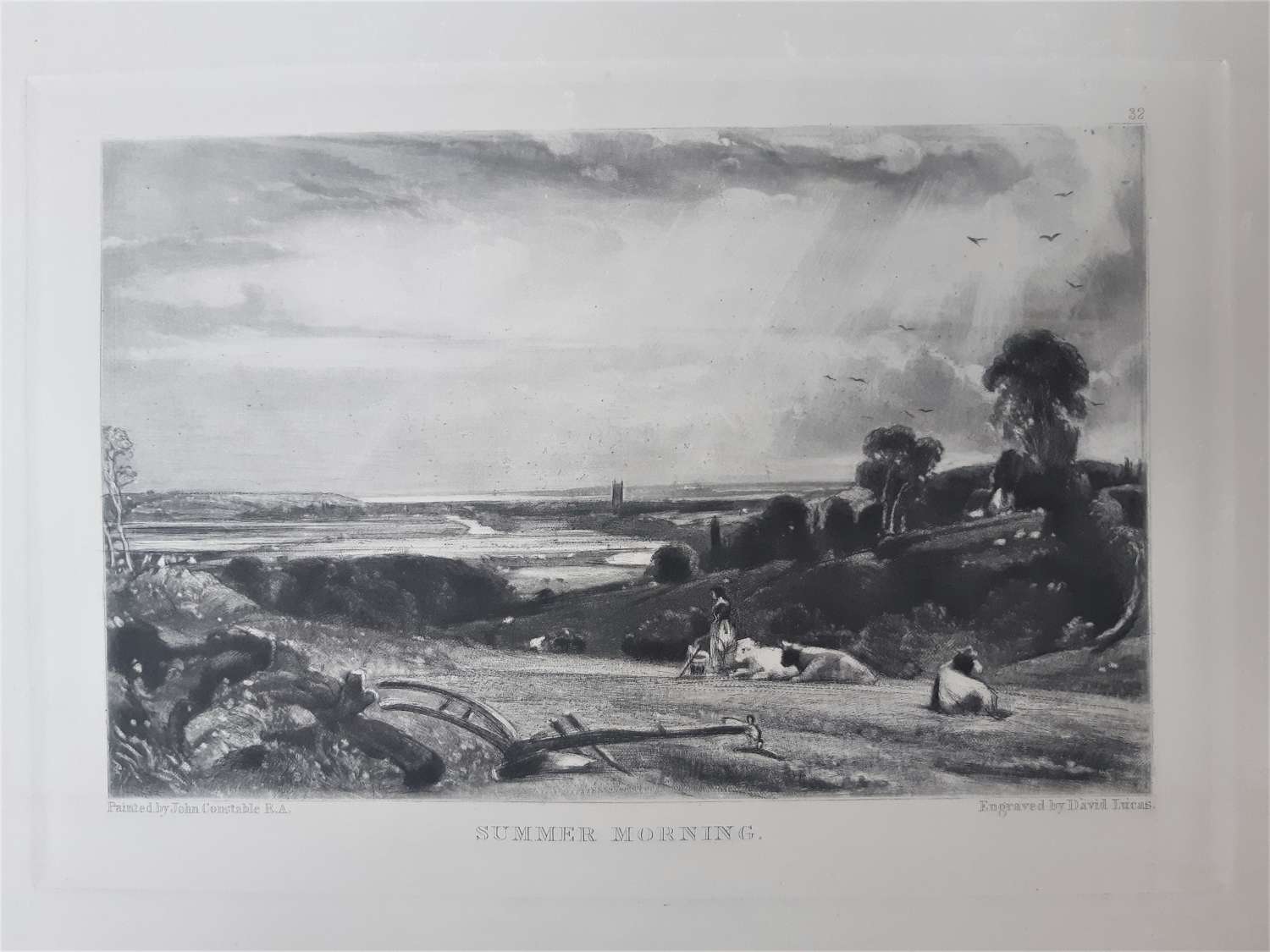 The view is of Dedham Vale as seen from Langham, with the tower of Dedham church on the horizon with the Stour Estuary beyond in the distance. Towards the centre of the scene are three recumbent cows with a milkmaid next to them who stands beside her pail. A plough is in the foreground.

From about 1829 Constable worked alongside the printmaker David Lucas to produce various mezzotints which were representative of Constable's paintings and were illustrative of his theme to illuminate the "chiaroscuro of nature". The medium of mezzotint, famous for the tone of its rich, velvety blacks was eminently suited to the task and these would become one of the most important series of prints made in England during the 19th Century.

Originally twenty-two subjects were published in five parts between June 1830 and July 1832. The engraving entitled Summer Morning was first issued within Part Three, released in September 1831. In the text which accompaied the print Constable marvels how the sun at 9 o’clock on a July or August morning gives ‘splendour to the landscape’.

Various reworkings of the plates were made by Lucas during Constable's lifetime. Alterations to Summer Morning were requested and overseen by Constable, including adjustments to the birds in the sky and strengthening of the shadows. A third cow was also introduced, to the right of the other two, and the milkmaid was modified so as to face left. The additional cow was referred to in letters from Constable to Lucas in 1833. He wrote on 20 April that he was sending 'an outline' of 'a little cow' and, in an undated letter, 'a few cows for the Summer Morning. Put which you please'

In 1855 Henry G. Bohn of York Street, Covent Garden reissued the various mezzotints made during Constable and Lucas' collaboration, along with further additional works. These were put together in a volume entitled English Landscape Scenery: A Series of Forty Mezzotinto Engravings on Steel, by David Lucas. From Pictures Painted by John Constable, R.A. In this final issue Summer Morning appeared as number '32'.

Sir Frederick Wedmore "Constable: Lucas: with a descriptive catalogue of the prints they did between them". London, 1904.