Leslie Carr particularly embraced maritime, railway and motoring subjects and provided images for posters for (amongst others) LNER, Southern Railway, British Railways and Morris Motors Ltd. However, despite being represented in a number of important collections and having produced numerous iconic images during the 1920s, 30s and 40s in his distinctive modernist, Art Deco style, little attention had been paid to his work until recently. Research has only lately confirmed his dates.

Leslie Carr was born at Hove in West Sussex in 1891. He worked initially at the London Stock Exchange then, clearly fascinated with machinery, served as a Lieutenant in the nascent Tank Corps during WW1. After the war he became a full time artist and graphic designer. During WW2, like a number of other professional artists, he was a member of the Auxiliary Fire Service (AFS). In 2018 one of his paintings was found languishing in the crypt of St Bride's Church, Fleet Street, London. It depicts firefighters tackling the blaze which engulfed the church as a result of a bombing raid on the night of 29th/30th December 1940 and left much of St Bride's in ruins1. Presumably Carr himself was an eye witness to the destruction and had first-hand experience of tackling the fire. Another of his original paintings appeared at auction in 2018, selling for substantially over its very modest estimate.2

Living with his wife Doris at 108 Wades Hill, Winchmore Hill, London, Carr continued working into the 1950s, producing posters for the European Grand Prix, held at Silverstone in 1950 and went on to become Art Director of The Motor magazine in the 1960s. He died at Hove on 6th February 1969.

Here, in his distinctive style, Carr depicts a panorama of Royal Naval ships and submarines off Spithead. The artist has painted the view as seen from on-board ship looking back towards the land. Rather than the slavishly accurate depiction of individual ships made by some artists, Carr has concerned himself with an overall design for the picture. In doing so, he successfully creates for the vewer a stylized effect of seeing the vessels lined up en masse. He has a particularly successful and idiosincratic way of capturing smoke rising from the ships' funnels.

The picture probably represents either the Silver Jubilee Review of the Fleet on 16 July 1935 or, more likely, the Coronation Review of the Fleet on 20 May 1937. An image by Carr was used on posters to advertise specially scheduled Southern Railways trains laid-on for spectators at this latter event (which has been described as "the last parade of the Royal Navy as the world's greatest and most prodigious navy")3.

The ship painted by Carr to the right here (with the bridge of an aircraft carrier beyond) may represent either HMS Nelson or HMS Rodney (the two huge Nelson-Class battleships which were in service at this time). HMS Rodney was to play a major role in the sinking of German battleship Bismark in 1941.

It is hoped our research here will assist with fleshing-out the biography of an extremely talented artist who has been much neglected.

Provenance:
Private Collection UK (passed down through the family of a member of the Admiralty Interview Board in the1930s) 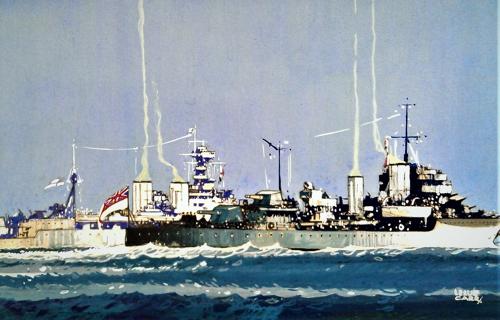