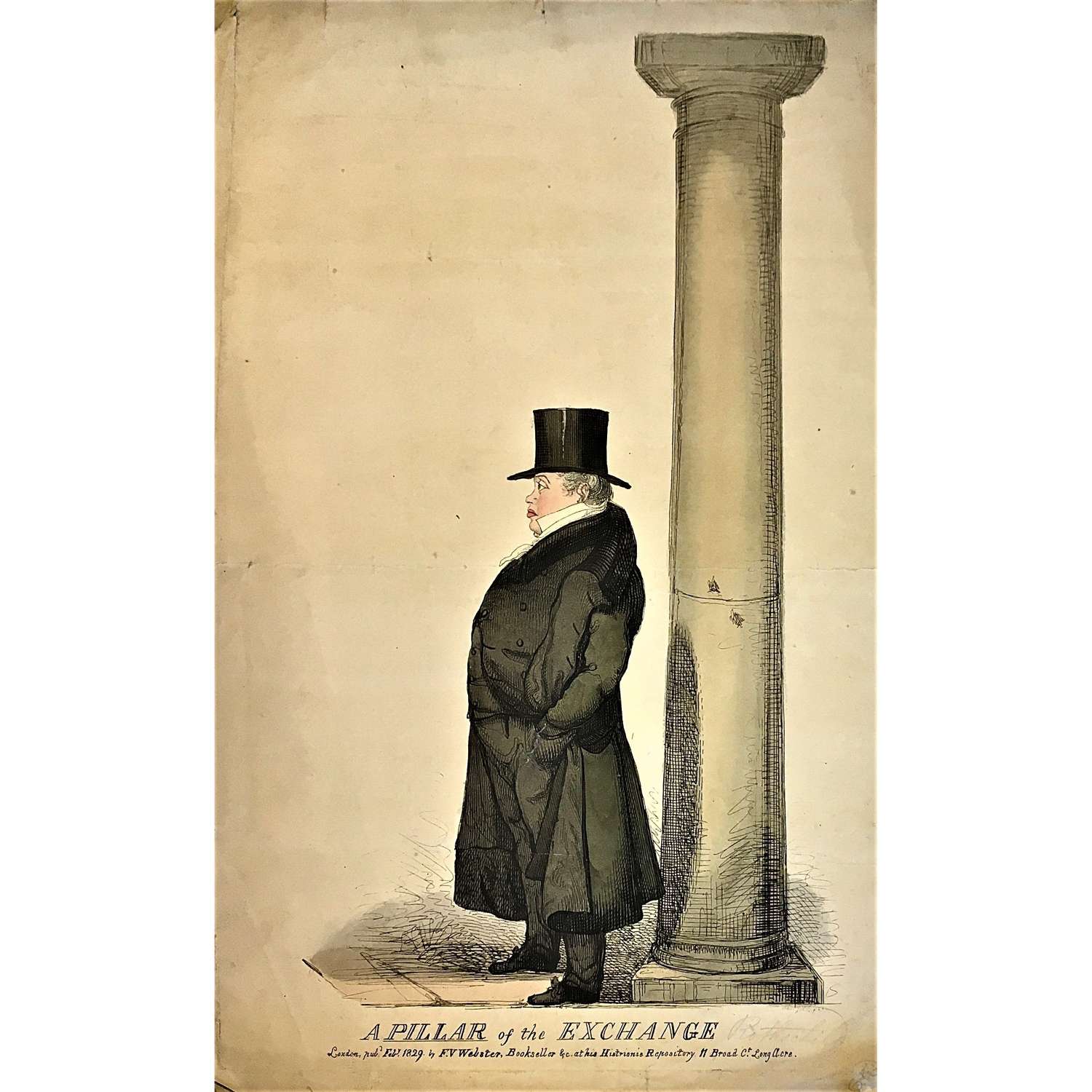 Portrait of Nathan Mayer Rothschild standing alone, a Doric column behind him, in profile to the left, wearing a suit beneath an unbuttoned greatcoat, hands in pockets, top hat, high white collar and trousers.

Nathan Mayer Rothschild was born in Frankfurt, the son of Mayer Amschel Rothschild. He settled in England at the age of 21, first becoming a textile dealer in Manchester before moving to London where he established N M Rothschild & Sons. He made a fortune dealing on the London Stock Exchange and through the opportunities provided by the financial schemes which funded the armies of the Napoleonic Wars. Such was his diligence he wrote to his brother "I do not read books, I do not play cards, I do not go to the theatre, my only pleasure is my business"[1]. In 1825-26, he was able to avert a liquidity crisis in the Bank of England by supplying it with a loan of gold.

Rothschild is said to have made a vast some of money through early intelligence of the Duke of Wellington's victory at the Battle of Waterloo. He is also known for the role he played in the abolition of the slave trade, through arranging the £20 million government loan which financed the plantation owners' compensation plan (though his own executors also received compensation under this scheme). By the time of his death, he was the richest man alive and had secured the Rothschild family in the position of preeminent investment bankers in Britain and across Europe.

Within the Exchange's building, he had a favourite position where he "leaned against the 'Rothschild Pillar'"[2], standing aloof from the other financiers. He is shown as such in the print here - the title referring not only to his being an example to others and a  mainstay of trade within the exchange, but also to the position he liked to occupy.

The plate seems to have been reissued by William Clarke, a newsman, with an altered publication line reading "W. Clarke, 21, Finch Lane Cornhill." There is scant biographical information on either publisher and both their versions of this print are rare.

Generally in good condition, historic fold to middle, minor creases, fritting to the edges. Trimmed to just outside the margins. An old pencil inscription reading "Rothschild" beside the title (denoting the subject) and a collector's mark in pencil lower right.

Literature:
See Item No. 240 on p. 98 of Alfred Rubens F.S.A, F.R.Hist.S, "Anglo-Jewish Portraits A Biographical Catalogue of Engraved Anglo-Jewish and Colonial Portraits from the Earliest Times to the Accession of Queen Victoria", London, The Jewish Museum, 1935. 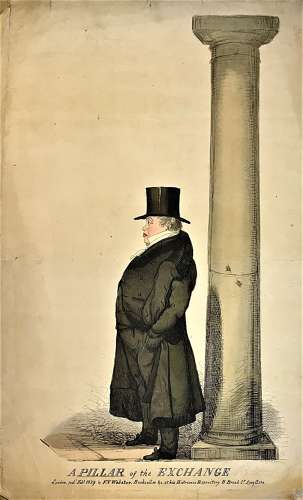