Olga Lehmann’s exceptional HMS Bounty arriving on Tahiti is an important rediscovery.  This work represents the artist's final proposal for the mural she painted at the famous Titchfield Hotel in Port Antonio, Jamaica which was owned by the flamboyant Austrailan-born film idol Errol Flynn (1909-1959).

Flynn's first encounter with Jamaica was in 1946 when he was sailing his famous yacht Zaca in the Caribbean and had to put into Kingston for repairs after a storm. He fell in love with the island (declaring it "more beautiful than any woman I have ever known") and his presence there (along with that of Noël Coward and Ian Fleming) heralded in a golden age for Jamaica as a high-society destination. In 1951 Flynn acquired the 400-room Titchfield Hotel and set about making it one of the world's finest resorts and a celebrity hideaway where he would play host to the likes of Marilyn Monroe, Tony Curtis, Katharine Hepburn and David Niven.

Olga Lehmann was a natural choice of artist to undertake the decoration of the hotel: not only was she an accomplished mural painter but her work on films ensured that she was familiar with working on a particulary grand scale and unphased by celebrity - immediately before this commission she was involved with the scenic decoration for The Master of Ballentrae (shot 1952) which starred Flynn as Jamie Durie (and immediately afterwards designed the costumes for The Dark Avenger (shot 1954) starring Flynn as Edward, the Black Prince). She was also stylish, colourful, cosmopolitan and unstuffy - Flynn certainly did not want the Titchfield to be dull in any way:

My dough was in this hotel, and I wanted young people around:
vitality and music, the Mango Walk, calypso, be-bop, and rock-
and-roll: dancing and life [1]

Lehmann may well have been aware of John Minton's large-scale painting Jamaican Village (Exhibited at the Royal Academy in 1951 (No. 398)) or may have seen others of Minton's Jamaican pictures exhibited at the Lefevre Gallery, the Gargoyle Club, or the Colony Room around this time. There is certainly an affinity between the two artists' work and both chose a similar palette, rich in sharp acidic colours, to express tropical heat. Lehmann's piece represents the arrival of HMS Bounty on the tropical island of Tahiti in October 1788. To the right many of the Bounty's crew are stripped to the waist whilst they undertake various tasks under the watchful eye of Captain William Bligh, who haughtily gives orders in full-uniform at the centre of the picture; to the left, beneath the coconut palms, naked native Tahitians look-on as a trusting child presents a fruit to a particularly piratical looking sailor and his mate. In proposing this historical event as the subject for the commission, Lehmann has demonstrated her brilliance. The scene of the famous mutiny on an island paradise would have particularly appealed to Flynn as the client [2] - his breakthrough film was In the Wake of the Bounty (1933) in which he had played the young Fletcher Christian. (He also claimed to be related to the famous leader of the Bounty's mutinous crew (though there is no genealogical evidence for this)). Whilst being, on the surface, a straightforward narrative depiction, Lehmann has also conveyed the essential tensions between an indigenous population and arriving colonisers (some of whom will "go native" and never return to the land of their birth). In this way she could also allude, less overtly, to the racial and political conflicts which were faced by Jamaica at this sensitive time. Lehmann visited Jamaica to paint the work and personally oversaw the installation of the large final piece in situ at the Tichfield Hotel [Fig 1]. The work dates to right in the middle of the two decades between 1945 and 1962 when Jamaica gained its full indepenence from Britain (a period referred to as "constitutional decolonisation"). In May 1953, the year in which this work was painted, various amendments to Jamaica's constitution came into effect which created its first government ministries. The cultural identity of the emerging island state clearly resonated with Lehmann. It is no coincidence that Argo Records in the UK signed Edric Connor (1913-1968) the following year and released a pioneering LP of Jamaican folk music entitled Songs from Jamaica: the label's publicity director was Lehmann's husband Carl and she designed the LP's cover.

What ultimately happened to the final mural has long been the subject of conjecture, but it was most probably lost in the fire which destroyed the hotel in 1969. This rediscovered work is therefore probably the only significant survival of the decorative scheme.

Provenance: Bought directly from the artist at an exhibition at Thaxted Guildhall in the mid-1980's

ACQUIRED ON BEHALF OF A CLIENT

Olga Lehmann was born in Catemu, Chile in 1912. In 1921 she came to England and in 1929, as a precocious 17-year-old, won a scholarship to the Slade School of Fine Art where she studied under Henry Tonks and Randolph Schwabe. She learned portraiture under Allan Gwynne-Jones but, ultimately, in her final year, she discovered the theatrical design course which was taught by Vladimir Polunin (1880-1957) (who had been Diagalev's main scene painter at the Ballets Russes). She was joint winner of the Slade's celebrated Figure Painting Prize in 1931 and also won prizes for Composition and Theatrical Design before graduating in 1934.

Lehmann embarked upon a successful career which encompassed the worlds of graphic art and portraiture but she was particularly in demand as a mural designer where her work was recognized as every bit as good as that of her slighly older male contemporaries (such as  Eric Ravilious, Edward Bawden and Rex Whistler). The inter-war period, dominated by Art Deco, saw mural painting enjoying a huge rennaissance - Lehmann received numerous commissions to design and paint decorative schemes for hotels, restaurants, theatres, company boardrooms, private members' clubs and stylish new residential buidings. The modernist architect Wells Coates (1895-1958) particularly recommended her work to clients, along with that of Oliver Messel. Lehmann's work was included in the major surveys of decorative painting during this period including Mural And Decorative Painting (Whitechapel Art Gallery, 1935) and Mural Painting In Great Britain (Tate Gallery, 1939). Sadly very few of her early schemes survive.

In 1939 she married the broadcaster, author and editor Carl Huson (1903-1984) who was also the publicity director for Argo records (for whom she produced a number of LP sleeve designs). At the outbreak of WWII she was permitted by the War Office to make sketches of London bomb damage, air raid shelters and ARP personnel. Her husband became an ARP warden, Chief Shelter Officer in St. Pancras and an Intelligence Officer in the RAFVR. At the height of the Blitz in 1940, their studio-flat in Hampstead was destroyed by a bomb and much of her early work was lost. Two pictures from the war years, produced under the auspices of the War Artist's Advisory Committee, are held by the Imperial War Museum - one depicts Christmas Eve 1940 and another painted in January 1941 shows, appropriately, an ad hoc concert hall set up in a shelter beneth St Pancras borough. In that year she made her first forray into art design for motion pictures, working on the set designs for the morale boosting Hi, Gang!. She was also involved with decorative schemes for government offices and bunkers and munitions factories, such as those for the workers' canteen of the Bristol Aircraft Company at Spring Quarry, Corsham, Wiltshire (located 150ft underground and for which she painted over one-hundred images depicting British life, assisted by Gilbert Wood (1904-1982)). Her son Paul was born in 1942 but Lehmann continued to work, producing monthy designs for the BBC's Radio Times and The Listener and also receiving regular commissions for book illustrations.

She contributed to the Festival of Britain in various ways. Lehmann was one of the artists whose contemporary wallpaper designs were showcased and launched during the Festival by John Line & Sons Ltd as part of their "Limited Edition" collection. In 1944 she had stepped-up her work in the motion picture industry, becoming a scenic artist with British National Studios, whose cinema productions where so important for morale during WWII. It was in the movies where she found the greatest opportunities to use her many remarkable talents. Her skills were employed in the production of storyboards, promotional posters and advertising, scene painting, titles, set and costume design and art direction. She eventually grew frustrated with art directors taking much of the credit for her work and went freelance during the '50s. She designed sets and costumes at Pinewood Studios, for MGM and the Associated British Picture Corps and worked with many of the greatest film makers including Powell and Pressburger, Charlie Chaplin, Alfred Hitchcock, Carl Foreman, Peter Ustinov, Vincente Minnelli and Nicholas Ray. It was Lehmann's "Big Brother is Watching You" posters which dominated Michael Anderson's original film version of 1984 (made in 1956) - the face of "Big Brother" was, in fact, a portrait of her husband Carl. She continued with portraiture thoughout her career and private commissions included Dirk Bogarde, Peter Sellers, Marlene Dietrich, Audrey Hepburn and, of course, Errol Flynn.

In 1962 she founded Olga Lehmann Associates to assist her with her film and TV workload and also took a post as Production Designer for Rank Advertising Films. During the 1970's and 80's she was nominated four times for Emmy awards for outstanding costume design.

As an artist who had the good forture of being salaried for much of her career, Lehmann survived without a need for any gallery representation (apart from a few one-man-shows which she herself arranged). She did exhibit with the London Group at the New English Art Club and at the Royal Portrait Society but much of her work was acquired by friends and still remains with them or their families. The fact that she did not have anyone with a commercial interest to champion her art had the effect that, although extremely successful, she was relatively obscure beyond the immediate circle of those with whom she interacted. Many less able artists, who found it necessary to suppliment their incomes with teaching jobs or with journeyman commissions, are now more fêted because gallerists had an interest in promoting their art.  It is also only recently that cinema has been taken seriously as an art form and so, as an artist who frequently worked within the film industrry, she was underappreciated. Much of Lehmann's film and television work went uncredited but it was seen by tens-of-millions of people who would not recongnise her name. It hung in the backgrounds of many films and TV series, it was what the actors wore or even the very substance of the film set itself. Her work even included portraits hanging in such makebelieve mansions as those of the Carringtons and the Colbys in the US TV series Dynasty (and its subsequent spin-offs).

She and her husband settled at 'Sparrows Hall', Tindon End, Great Sampford, near Saffron Walden in rural Essex. They would winter in Los Angeles, where their son lived, and return to England for the summer. She worked right up to the end of her life, holding one-man-shows (which she organised herself) in Thaxted Guildhall near her home. Olga Lehmann died in Saffron Walden in 2001. Some of her archive is held by the National Art Library at the V&A including some sketches for and photographs of mural designs, record sleeves for Argo, her diaries and correspondence with sitters [see National Art Library AAD/2002/14]. 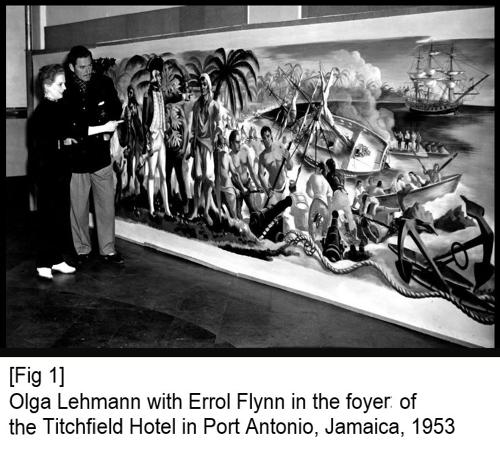