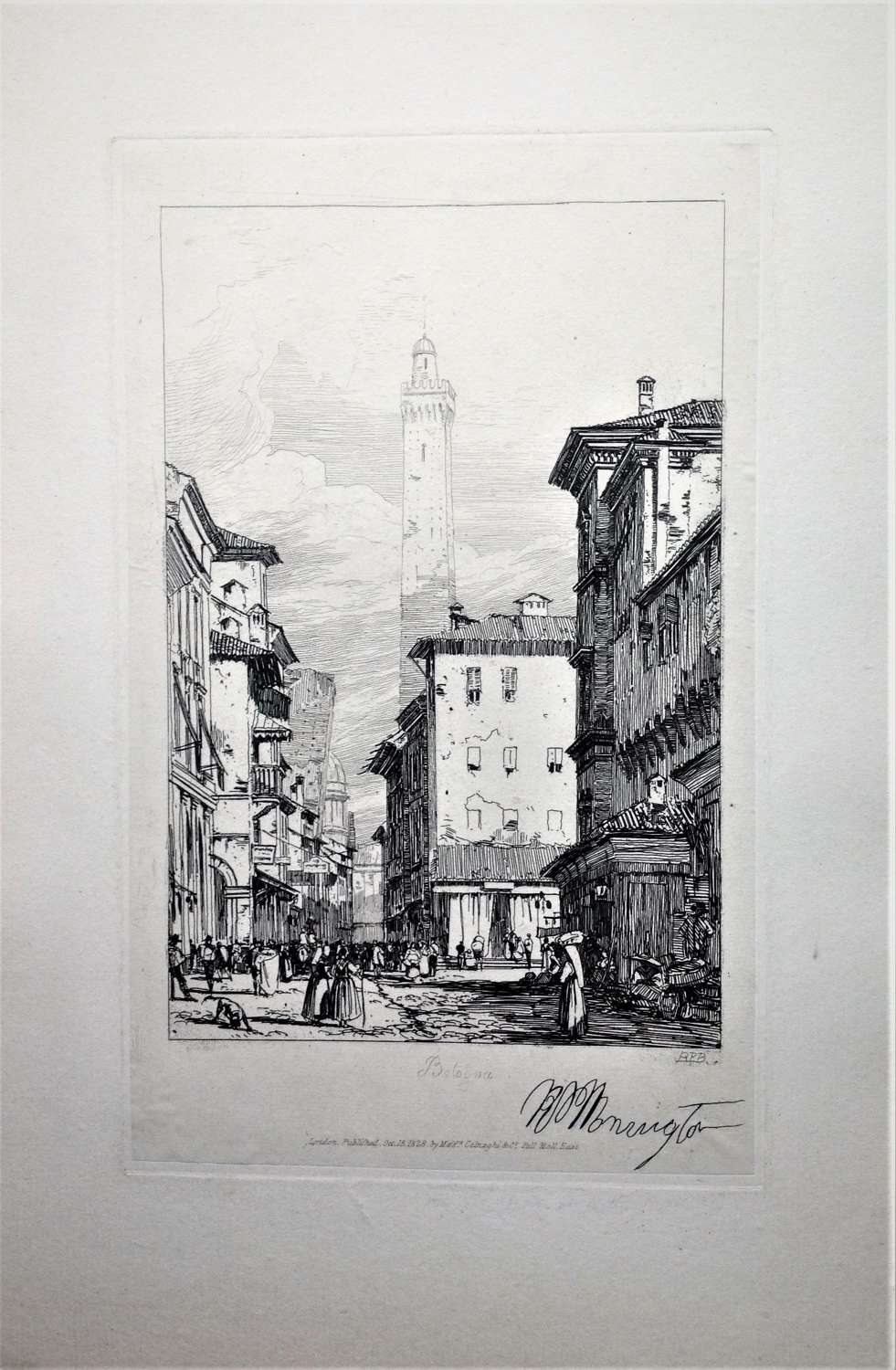 Title in lightly scratched lettering beneath the image with monogram "RPB" to the right and with publication details "London,Published Oct 15 1828 by Messrs Colnaghi & Co Pall Mall East", and facsimile “RPBonington” signature.

A rare print in an early state of the artist’s only known line-etching. Issued by Colnaghi, as a memorial to the young artist, just three weeks after his death. A very fine impression.

Richard Parkes Bonington died of tuberculosis aged 25 at 29 Tottenham Street in London on 23 September 1828. Despite his tragically brief career, Bonington occupies a key role in the artistic dialogue between Britain and France in the first quarter of the 19th century. Much celebrated for his watercolours Bonington was also a remarkable lithographer, the skills for which he had learnt from French masters.

Between 19th & 24th May 1826, Bonington had visited Bologna with Baron Charles Rivet (1800-1872) and later produced a typically jewellike watercolour, now in the Wallace Collection. The view is looking from the Via Rizzoli towards the leaning Torre Garisenda (on the left) and the Torre Asinelli (in the middle of the image) with the dome of the church of St Bartolomeo e Gaetano in the distance [see Fig.1]. In 1826 or 1827 Bonington also began this etching of the scene in similar dimensions to the watercolour. Two early impressions are known to have been pulled from the plate as it was apparently found in his studio at the time of his death, both of which are now held by the British Museum. In these prints there is an absence of any detail in the sky, with the effect that mid-section of the central tower is lost without a tone behind it. The etched lines of the leaning tower on the left and the distant dome are very faint, and the line of the border has failed to bite at the top left-hand corner. There is no text on these impressions but there is a chance that the ‘RPB’ monogram and ‘Bologna’ title were also added by the artist, however, no prints taken from the plate in such a state are known (and such a state is therefore conjectural).

Presumably, Bonington would have corrected the defects had he survived but, in his absence, Dominic Colnaghi approached Bonington’s friend Thomas Shotter Boys (1803-1874), who had served as an apprentice to the engraver George Cooke (1781-1834), to complete the plate in a sensitive fashion. Boys understood exactly what was needed and the plate was re-bitten to correct the faults. Along with publication details, a cloud formation was added, similar to that seen in the watercolour of the subject.

This print therefore exists in three certain early states: a first (of which only two impressions are known) without clouds or lettering etc; a second with scratched initials and title and the image brought to an issuable form and with publication details "London, Published Oct 15 1828 by Messrs Colnaghi & Co Pall Mall East" and a third state (as here) with an additional “RPBonington” facsimile signature. This last addition seems to have been incorporated to explicitly highlight the print as being the work of Bonington. For a similar impression see BM 1857,0520.353.

A further and much later edition was issued by the Gazette des Beaux-Arts in 1878 with different publication details (see Yale  B1994.4.705). 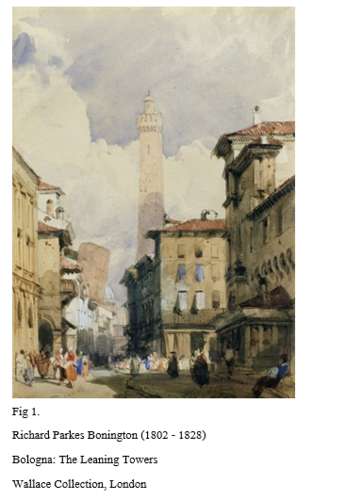