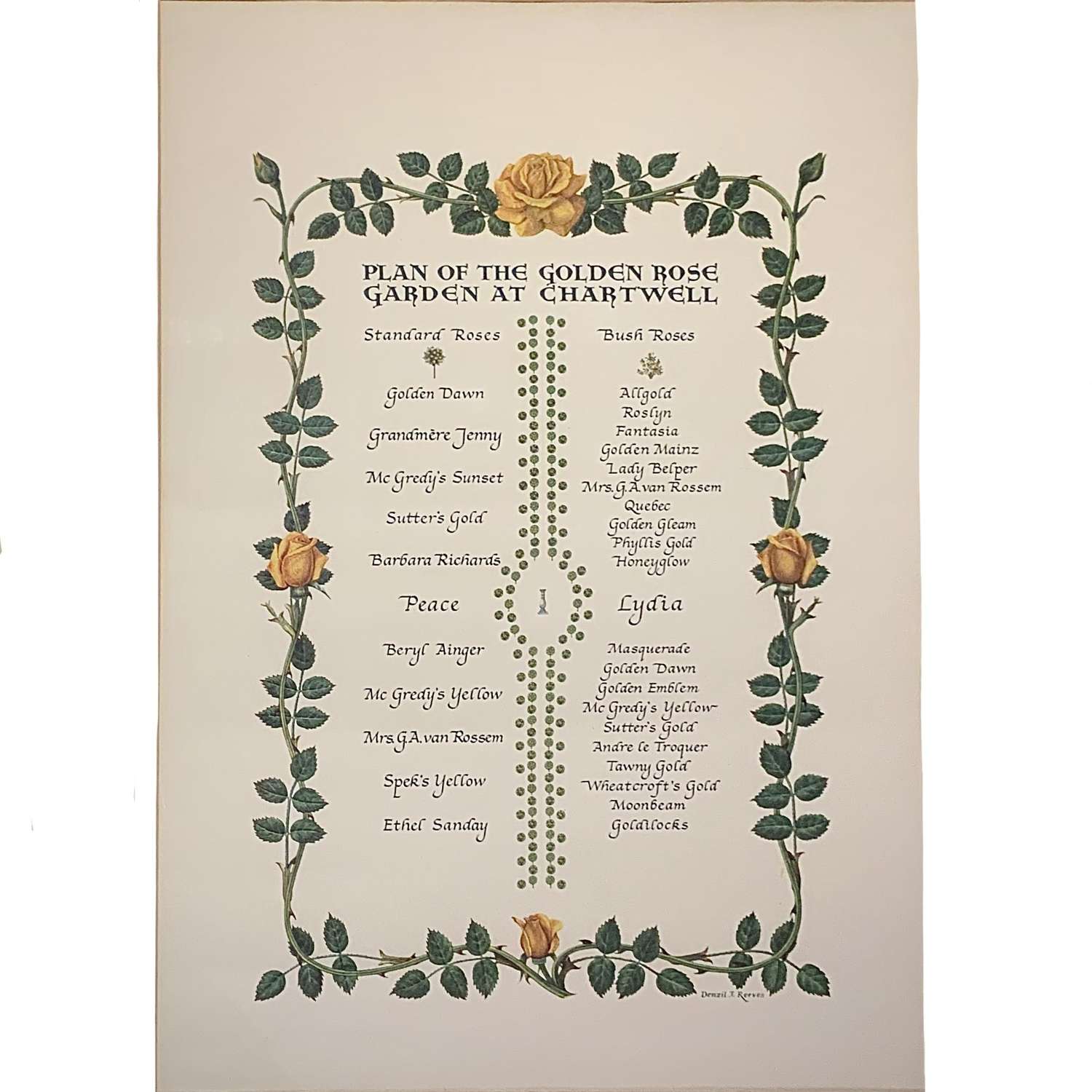 The Golden Rose Garden at Chartwell was planned by Sir Winston & Lady Churchill's surviving children as a gift to mark their parents' Golden Wedding Anniversary in September 1958. As the planting of the new garden was not completed ahead of the Churchill's actual anniversary date marking fifty years of marriage  (and because the roses would not have bloomed until the following year) a vellum-bound, illuminated, large-format elephant-folio book entitled "The Golden Rose Book" was prepared for them as a gift to receive on the day [see National Trust Collection [NT1102046.1]. This was presented by the Churchill children, who flew out to surprise their parents with it while they were holidaying at Villa "La Capponcina", Cap d’Ail on the French Riviera.

This charming print is a reproduction of the illuminated frontispiece from the original book which contains various original watercolour illustrations of twenty-nine of the yellow roses listed here, which were incorporated within the planting scheme. Each page in the book is dedicated to a single bloom and includes works by numerous celebrated artists including Cecil Beaton, Adrian Daintrey, André Dunoyer de Segonzac, Ivon Hitchens, Augustus John, Duncan Grant, Oliver Messel, John Nash, Paul Maise, Sir Matthew Smith etc. The Home Secretary R.A. Butler also contributed a picture, as a promising amateur painting "pupil" of Sir Winston.

The wonderful diversity of the artist's styles was unified by the binding and the calligraphic script and illuminations which were "exquisitely done by Denzil Reeves of Colchester"[1]. He also produced the illuminated calligraphy frontispiece "plan" which is reproduced here. This depicts the planting scheme of the 'Golden Rose Garden' which was laid out as a central "avenue" in the Kitchen Garden at Chartwell, with a sundial in the middle.

Denzil John George Reeves was born in Hailsham in Sussex. He obtained a scholarship to Eastbourne School of Art in 1941, where he was encouraged to take up calligraphy. After military service he began working as a commercial artist in Colchester, before becoming a teacher at Colchester School of Art, where he remained until his retirement. Alongside his teaching, he was one of the country's most distinguished calligraphers, often working on commissions such as "The Golden Rose Book". 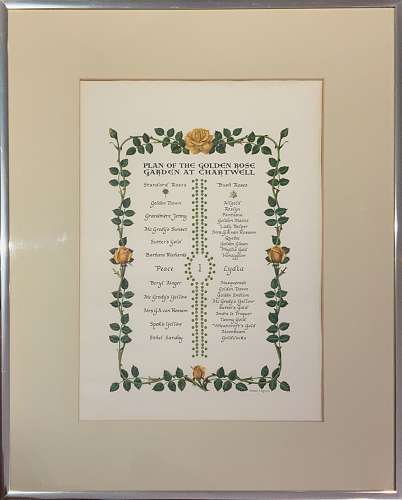