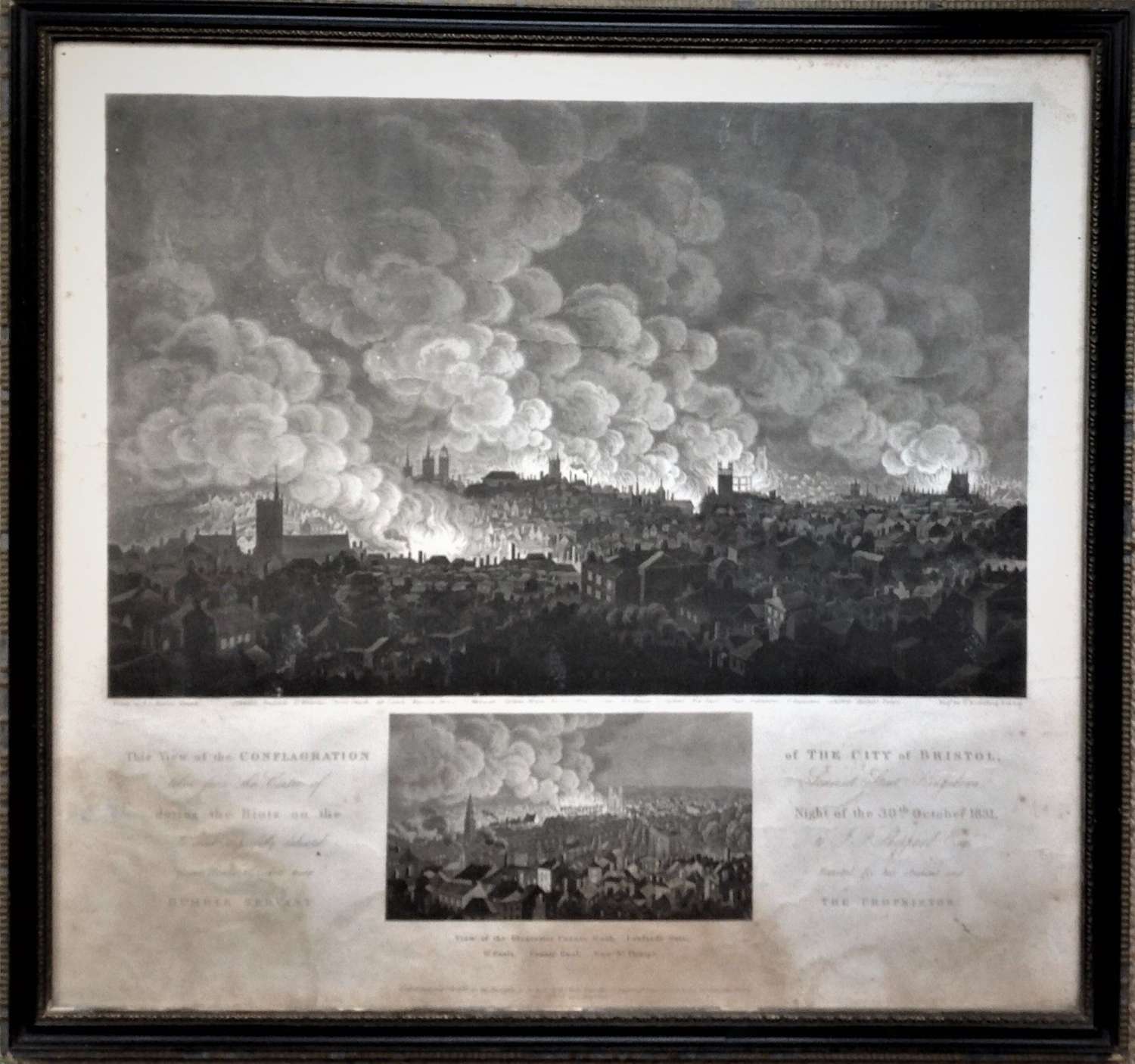 The Conflagration of the City of Bristol 30th October 1831

A print of a dramatic nocturnal scene with a city skyline highlighted by smoke and flames; a further vignette beneath showing a view over the city from another direction. Lettered beath the main image "Drawn by F.S. Martin, Bristol" and "Engd by C. Rosenberg, London" with the main landmarks named from left to right as follows: "St. James's, Bridewell, St. Nicholas, Christ Church, All Saints, Mansion House, St. Werburgh, Custom House, Excise Office, St. John's, Toll House, St. Stephen's, New Gaol, St.Paul's - Bedminster, St. Augustin's, Cathedral, Bishop's Palace". Text either side of the main image "This View of the CONFLAGRATION of THE CITY OF BRISTOL, taken from the Centre of Somerset Street, Kingsdown, during the riots on the Night of 30th October 1831, Is most respectfully dedicated to J.F. Sheppard Esqr, Grove House, Clevedon, near Bristol, By his obedient and HUMBLE SERVANT THE PROPRIETOR." Lettered beneath the vignette "View of the Gloucester County Gaol, Lawford's Gate," and with landmarks left to right named "St Paul's County Gaol, New St. Philips."

Publiction Details "London, Published, Febr 1832 for the Proprietor, to be had of W.J. Wade, Printseller, 86 Leadenhall Street, at 13, Somerset Strt, Kingsdown, Bristol, / and all Book and Printsellers".

William John Wade (1784–1839) of 86 Leadenhall Street, London is listed in trade directories as a carver and gilder. He made and sold girandoles and looking-glass frames, cleaned, lined, restored and retailed paintings and prints (and also acted as a furneral director). His details as published here pose something of a conundrum: only a very small number of prints, all dating to the period 1829-32, were published by W.J. Wade. Two others of these were engraved by Rosenberg and all the other known prints set out his address simply as "86 Leadenhall Street [London]". This Bristol print also adds "13 Somerset Street, Kingsdown, Bristol". Bristol directories from this time show a Mrs Sarah Martin (who has the same surname as the artist of the original drawing on which the print is based) living at this address, which therefore raises a question about what the relationship was between the publisher and the artist? The print is dedicated to Joseph Francis Sheppard (d 1844) who was a relatively wealthy Bristol merchant, property and ship owner who had made money from the lace and silk trade. It is not clear why a dedication to him has been made but Sheppard owned a property on Bridewell Street, which was used as a public house known as "The William IV". The unusual wording in the dedication by "his humble servant the proprietor" might be explained by the print having been commissioned by a pub landlord with Wade having been approached to privately publish the print, Christian Rosenberg (fl. 1796-1850) being commercially engaged to reproduce the original drawing in aquatint and the whole project being undertaken under the initiative of an unidentified Bristolian entrepreneur, possibly underwitten by J.F. Sheppard. Further research may yield some evidence as to what Sheppard's view was on the divisive issue of Parliamentary Reform at this time. The date of the print's publiction is significant in that it was issued ahead of the Third Reform Bill being passed by the House of Commons in March 1832 (it probably also predates prints made after a drawing by William James Müller (1812-1845) of Queen Square on the night of 30 October 1831). It may be that the idea was to circulate the print to show the effects which resistance to Reform could have in sparking civil unrest; circulating a dramatic image as a record of this alarming spectacle may have been intented to bolster the case for Reform. Certainly the Bristol Riots were important in precipitating the passing of the Great Reform Act in 1832.

Whatever the circumstances of the print's production it provides a very accurate eye-witness portrayal of Bristol's arsonous riots on 30th October 1831, from a key vantagepoint.  It certainly demonstrates the catastophic effects a riotous assembly could bring to a metropolitan area. The main view is looking almost directly South from Kingsdown. The text indicates that the view was taken "from the Centre of Somerset Street, Kingsdown" - a panoramic view of Bristol is available from the upper windows of the houses on this road. It is very likely, due to the name of the artist, that it was actually drawn from a window of 13 Somerset Street

The man whose appearance in Bristol on 29th October was the catalyst for the riots, Sir Charles Wetherell MP (1770-1846) (a reactionary judge and opponent of Reform), had escaped the mob in disguise and actually made his way up to Kingsdown to see for himself the dramatic scene across Bristol which this elevated area provided. From here he could assess which parts of the City were now engulfed by flames. This, therefore, is the very sight which he would have seen. Along with "View of Bristol From Clifton Wood, During the Riots of 1831" by Samuel Jackson (1794-1869), "Bristol seen from Pile Hill on the night of October 30th, 1831" by Thomas Rowbotham (1782-1853) and various images of the destruction portrayed by William James Müller, this print is an invauable and dramatic record of the damage wrought by the rioting.