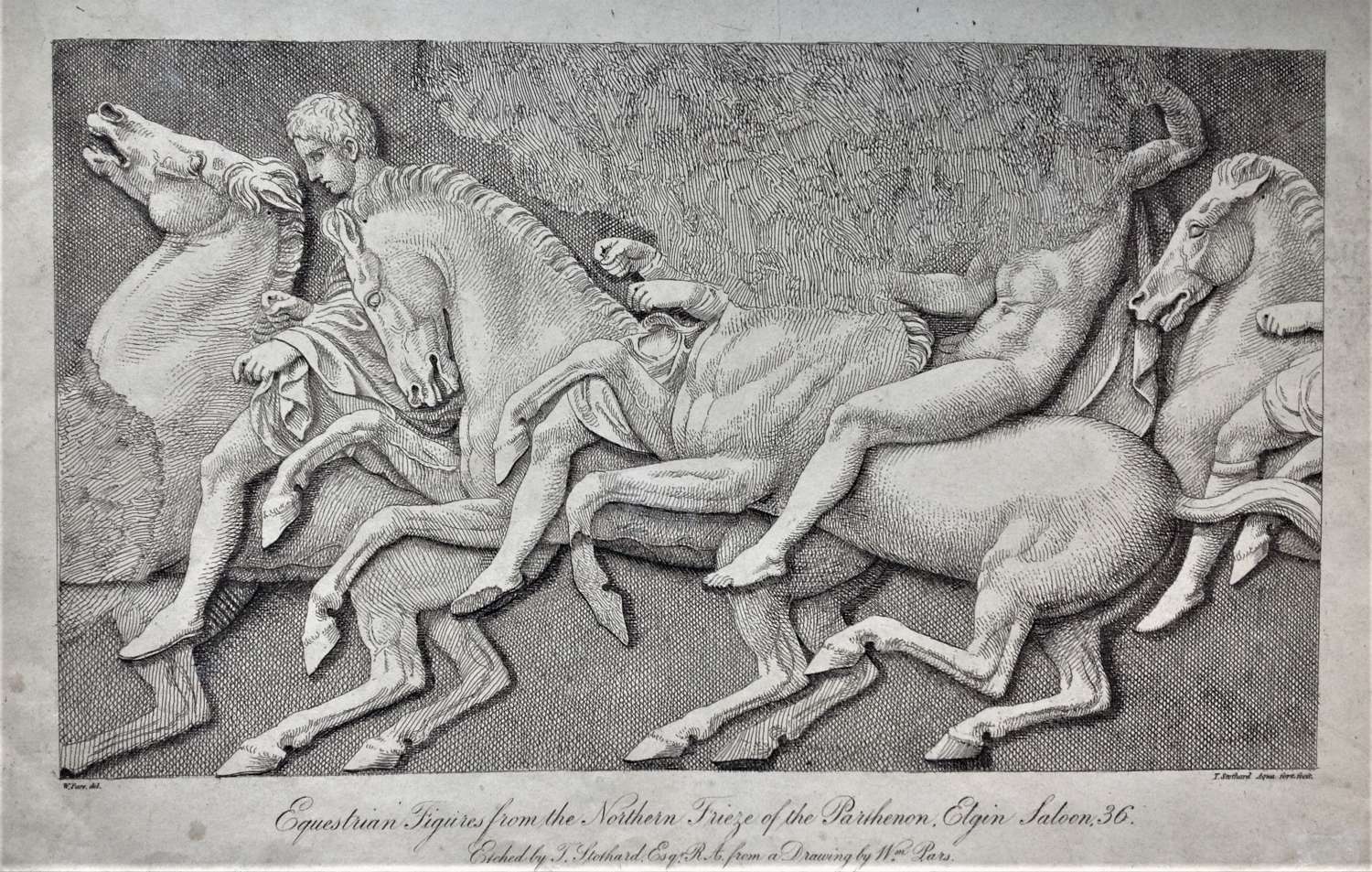 Lettered "W. Pars del. / T. Stothard, Aqua fort. fecit." and with title “Equestrian Figures from the Northern Frieze of the Parthenon, Elgin Saloon, 36" and "Etched by T. Stothard, Esqr, R. A. from a Drawing by Wm,, Pars."

From the frieze of the Cella of the Parthenon; north side; the eleventh stone; young men riding in cavalcade, right to left; one on the left wearing a cloak, bare-headed, looking down with both hands at his horse's shoulder, another figure on the right, naked except for a cloak, raising his left arm behind his head, right hand on his horse's nape, his head and shoulders defaced; later state with title. No publication line but engraved for James "Athenian" Stuart and Nicholas Revett's "The Antiquities of Athens".

The artist William Pars was appointed by the Society of Dillettanti to accompany the antiquary Richard Chandler and architect Nicholas Revett on the second archelogical expedition which it financed in 1765-1766. The purpose of this trip which was "...to make excursions to the several remains of antiquity in that neighborhood [of Smyrna]; to make exact plans and measurements, to make accurate drawings of the bas-reliefs and ornaments...".

Richard Chandler wrote of William Pars' work on the Acropolis that it was more diligently performed than the images made by French artist Jacques Carrey (1649-1726) in the 1670's. This was because Carrey only spent a few weeks on the site and did not work at height, on the same level as the sculptures.

“Mr Pars devoted a much longer time to his work, which he executed with diligence, fidelity, and courage. His post was generally on the achitrave of the colonnade, many feet from the ground, where he was exposed to gusts of wind, and to accidents in passing to and fro. Several of the Turks murmured, and some threatened, because he overlooked their houses; obliging them to confine or remove their women, to prevent them from being seen from that exalted situation. Besides views and other sculptures, he designed one hundred and ninety-six feet of bas reliefs in the acropolis."1

Pars' original drawing was therefore made whilst observing the frieze at height in its original situation. The title of the print indicates that by the time Pars' drawing at been engraved by Stothard, this section of the sculpture could now be seen in Lord Elgin's House in Park Lane, London.

Notes
1. See p 58, Chapter X, Volume II, of "Travels in Asia Minor, and Greece; or, An Account of a Tour made at the expense of the Society of Dilettanti", R Chandler D.D., (Third Edition), Joseph Booker, London, 1817