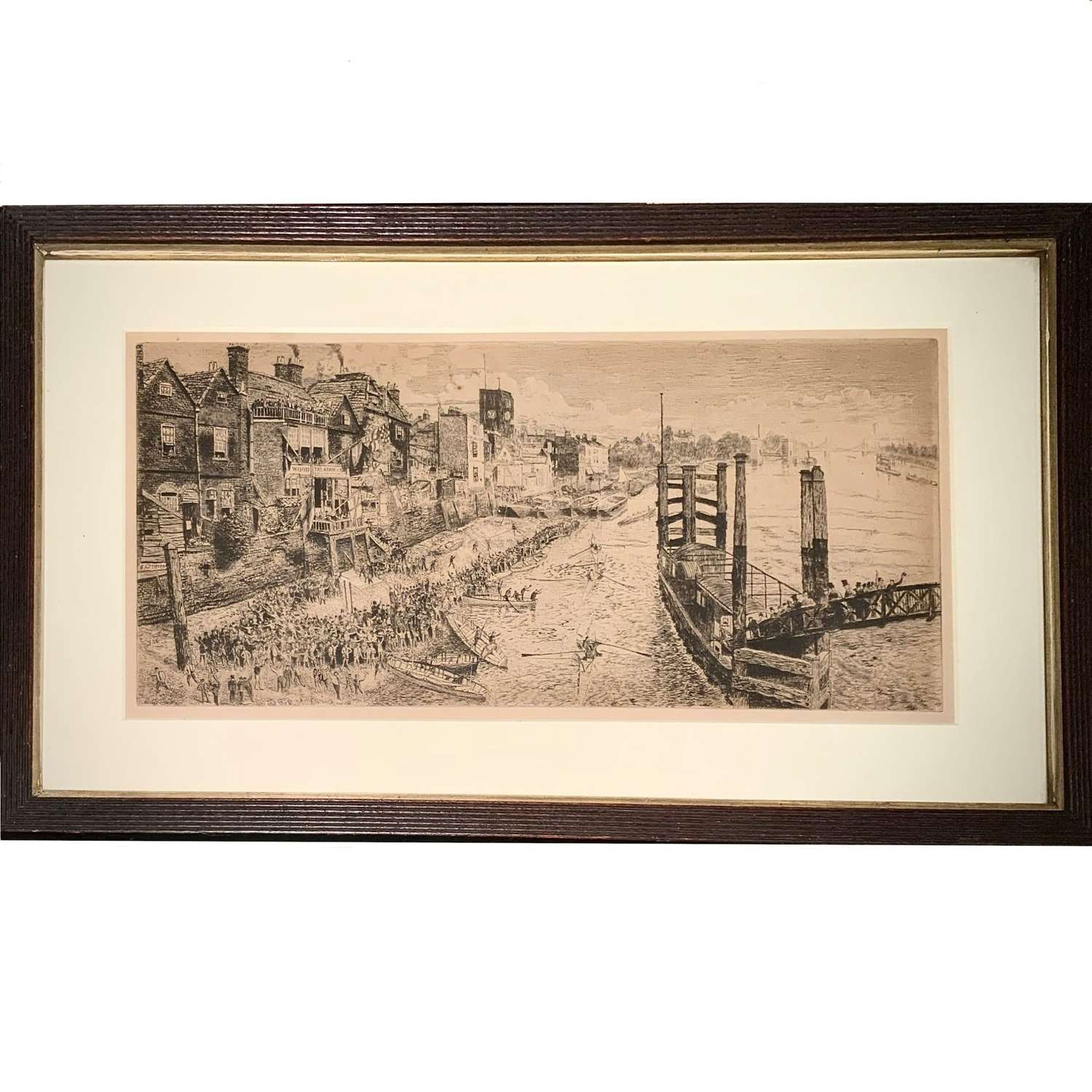 Signed "W Greaves" within the image lower left (on the weatherboard planks of the buildings).

Three coxless pairs row down the Thames towards the viewer, followed by a coxed four behind them, crowds of people are cheering from the foreshore in the foreground, beneath the riverbank structures. To the right various spectators lean over the handrail of a paddlesteamer jetty observing the climax of the race (a paddlesteamer is moored to the pier).

The scene, full of vivid incident and a characterful multitude of figures, is a depiction of the last traditional rowing regatta which took place in Chelsea in the summer of 1871. If the viewer follows the line of the Thames towards the horizon, the partly completed Albert Bridge (opened in 1873) can be identified spanning the river before Chelsea Bridge is reached (still known as Victoria Bridge at this stage). Bailey's Magazine of 1890 discusses how "Chelsea Regatta always attracted a numerous company, and under the old elms that grew on each side of Cheyne Walk, fun and sport of all kinds would be carried on."[1] The regatta used to be one of the highlights of the year in the Chelsea of old; Walter Greaves described how "what with guns firing, flags flying, bands playing and the immense crowd of people, Chelsea was pretty lively on the occasion of its annual Regatta. The 'Adam & Eve', the headquarters of the sports, was crammed with people, and one wondered how it stood the strain of such a weight being a very old building... This regatta, like the other river races made a remarkably artistic display of colour especially as it took place on a fine summer’s day, with blue skies and white clouds."[2] Greaves made several works relating to this event: an oil, now in the collection of Manchester City Art Gallery[3]; a watercolour of the same view, but without the crowd and a hand-coloured version of this etching.[4]

The 'Adam and Eve' pub, the main structure to the left which has numerous spectators crowding onto its flag and bunting bedecked balconies, was one of Chelsea's oldest taverns and actually had its own rowing club. It was one of the many ancient wharfs, riverside inns and warehouses which were demolished to make way for the Chelsea Embankment (opened on 9 May 1874). Two watercolour paintings by William Bell Scott (1811–1890) (Private Collection) show that the demolition of the properties in this section of Chelsea Reach was underway by May 1872. Whistler's friend and fellow artist Edwin Edwards (1823-1879) also made an etching of "The Adam and Eve Inn, Old Chelsea" seen face on as if from the water, exhibiting an impression of the print at the Royal Academy in 1872, the year of the pub's destruction.[5] Whistler produced an etching of the pub as seen down river, from the other side in 1878.

Various old labels verso confirm that this print formerly belonged to Chelsea residents, "the Misses Dagnall". There was six Dagnall sisters (several who remained as spinsters, the last of whom died around 1950) and two Dagnall sons, one of whom George C. Dagnall was a "surgeon dentist" based at the same address given for the sisters. The Dagnalls were descended from Charles Dagnall (1803-1878), the proprietor of Dagnall & Tilbury of Little Chelsea, rope makers, canvas sacking and coir matting manufacturers, who exhibited at the Great Exhibition of 1851. A fragmentary label states the title as "First of August... [? illegible]". This suggests that the Dagnall's possibly thought the etching depicted "The Doggett's Coat and Badge Race", a rowing race from London Bridge to Chelsea, which traditionally took place on 1st August and which still takes place. The race here however, is a coxless pairs event, indicating a different competition.

The Greaves family were watermen and lightermen and ran a boatyard between Battersea Bridge and Cremorne Gardens (beneath Lindsay Row (now known as Nos. 96 to 101 Cheyne Walk)), from which rowing boats could be hired. Walter Greaves's father had been a boatman to J.M.W.Turner and from the mid-1860's Walter Greaves and his brother, Henry, occupied the same role for James Abbott McNeill Whistler (1834–1903), Walter becoming in due course his studio assistant, friend and pupil before their ultimate falling-out in around 1878. The Greaveses lived on Lindsey Row (the former riverside house of the Earl of Lindsey which had been sub-divided into various dwellings in 1775) and when Whistler moved to Chelsea his first home there became 7 Lindsey Row (now 101 Cheyne Walk).

Many of Walter Greaves's works provide a fascinating record of changing Chelsea at the fin de siècle. The image here was created by Greaves under the tutelage of Whistler and shows a strong influence of his distinguished mentor. It is the largest and finest etching which Greaves produced and is considered to be his printmaking masterpiece. It is particularly nice that the provenance of the impression here provides a direct link to the Chelsea of the 19th Century and, quite possibly, to the artist directly.

Framed in a reeded oak frame with a gilt internal stretcher. Cream card mount. Unexamined out of the frame. 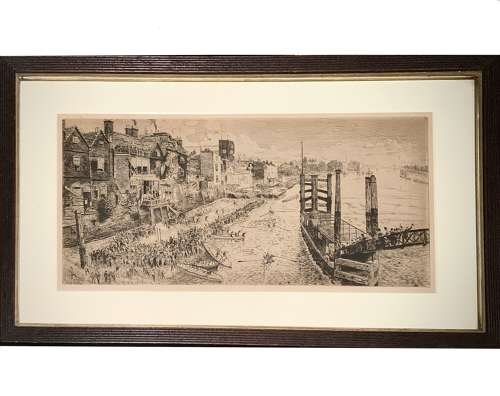 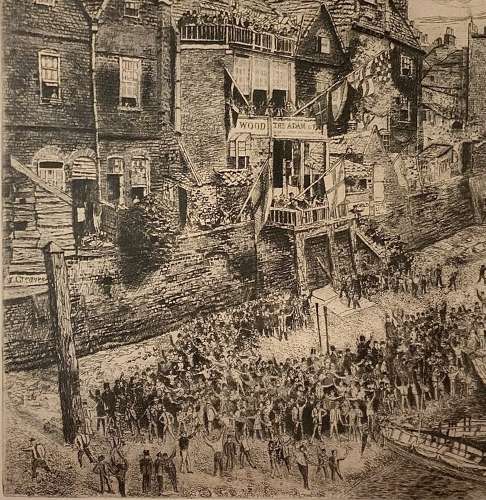 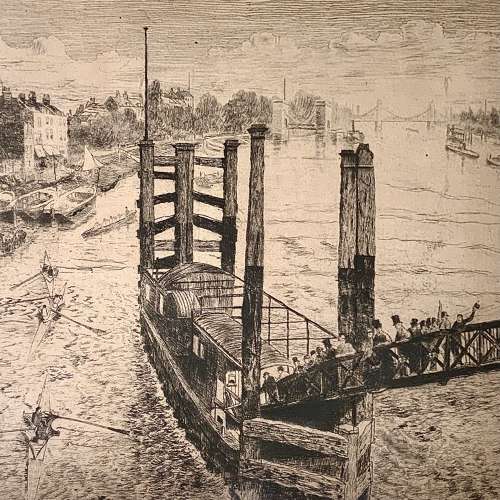