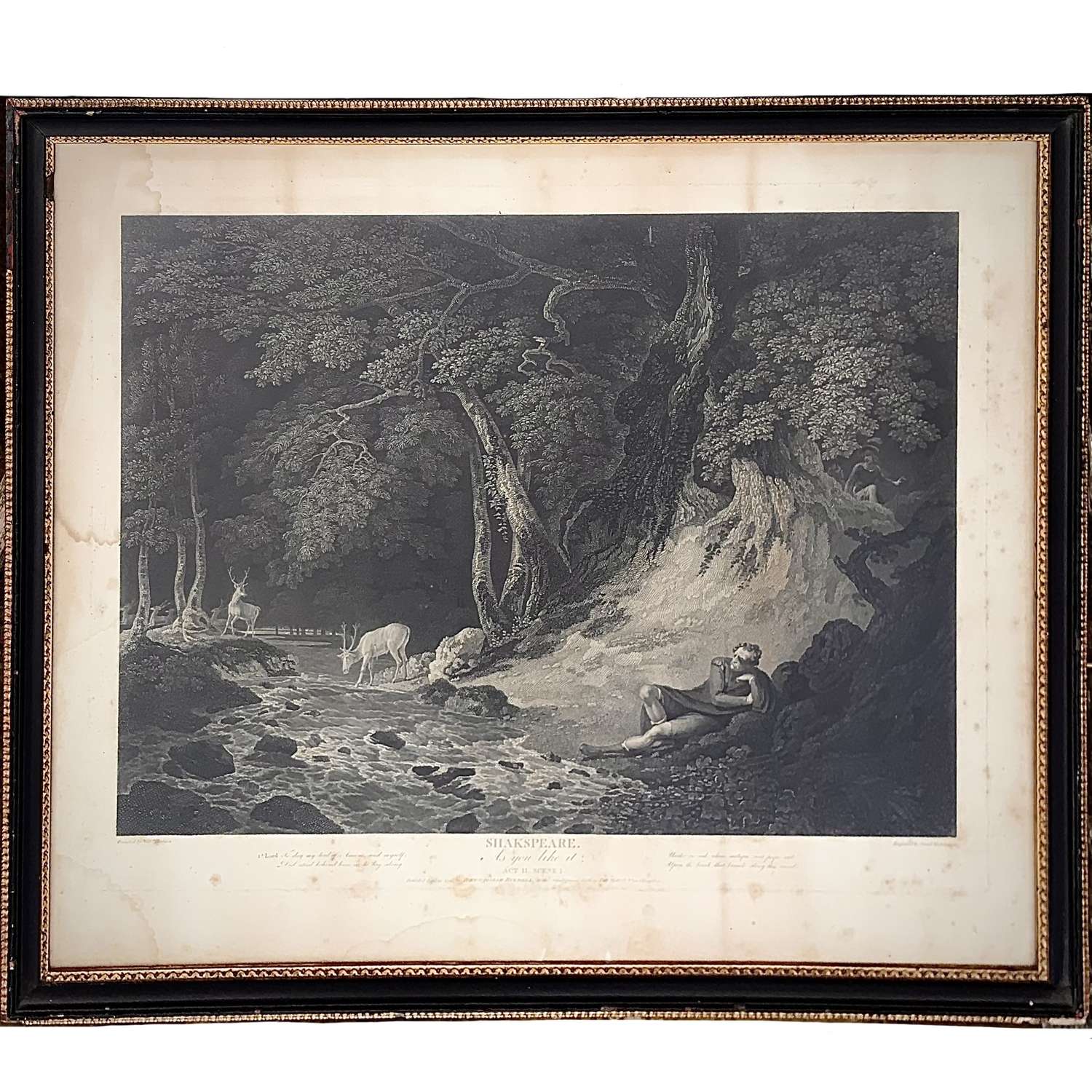 A very imposing large-format folio print illustrating William Shakespeare's play "As You Like It". The composition closely follows the lines from Act II Scene I, set in the Forest of Arden, where is it reported to Duke Senior that the character of Jaques "grieves" at seeing a wounded hunted stag crossing a brook. The First Lord and Lord Amiens can be seen hiding behind a tree observing Jaques as he lies watching the stag.

Lettered beneath the image lower left "Painted by Willm. Hodges.", lower right "Engraved by Saml. Middiman" with the title "Shakespeare / As you like it / Act II, Scene 1" / and publication line: "Published Sepr. 29, 1791 by John & Joshua Boydell, at the Shakespeare Gallery, Pall Mall & No. 90 Cheapside". With the lines from the play:-

"1st Lord: To-day my Lord of Amiens and myself
Did steal behind him as he lay along
Under an oak whose antique root peeps out
Upon the brook that brawls along this wood"

An impressively large print from the Boydell's monumental project for their "Shakespeare Gallery" - using Shakespearean imagery as the basis of pictures and prints and, hence, establish a national art form. Hodges' original painting, which formed the basis of this published image, is now in the collection of the Yale Center for British Art (Accession Number B1976.1.1).

William Hodges (1744-1797) was an exceptionally well traveled artist. He accompanied Capt James Cook on his Second Voyage (1772–1775) and in 1778 traveled to India, under the patronage of Warren Hastings. He travelled across Europe, including a visit to St. Petersburg in Russia, in 1790. He got into financial difficulties in 1795 following censure for exhibiting works which were deemed political during the early stages of the French Revolutionary Wars and, disillusioned, felt compelled to retired from his profession. He died (possibly by his own hand) after the collapse of a financial venture with which he was involved, during the banking crisis of 1797.

Presented in 'country house' condition in what is probably its original Hogarth style frame, with rippled glass. The print had been attractively stained, toned, spotted and mellowed by two centuries of ageing. Colnaghi label verso. Some losses to gilded egg and dart beading to the edges of the frame.