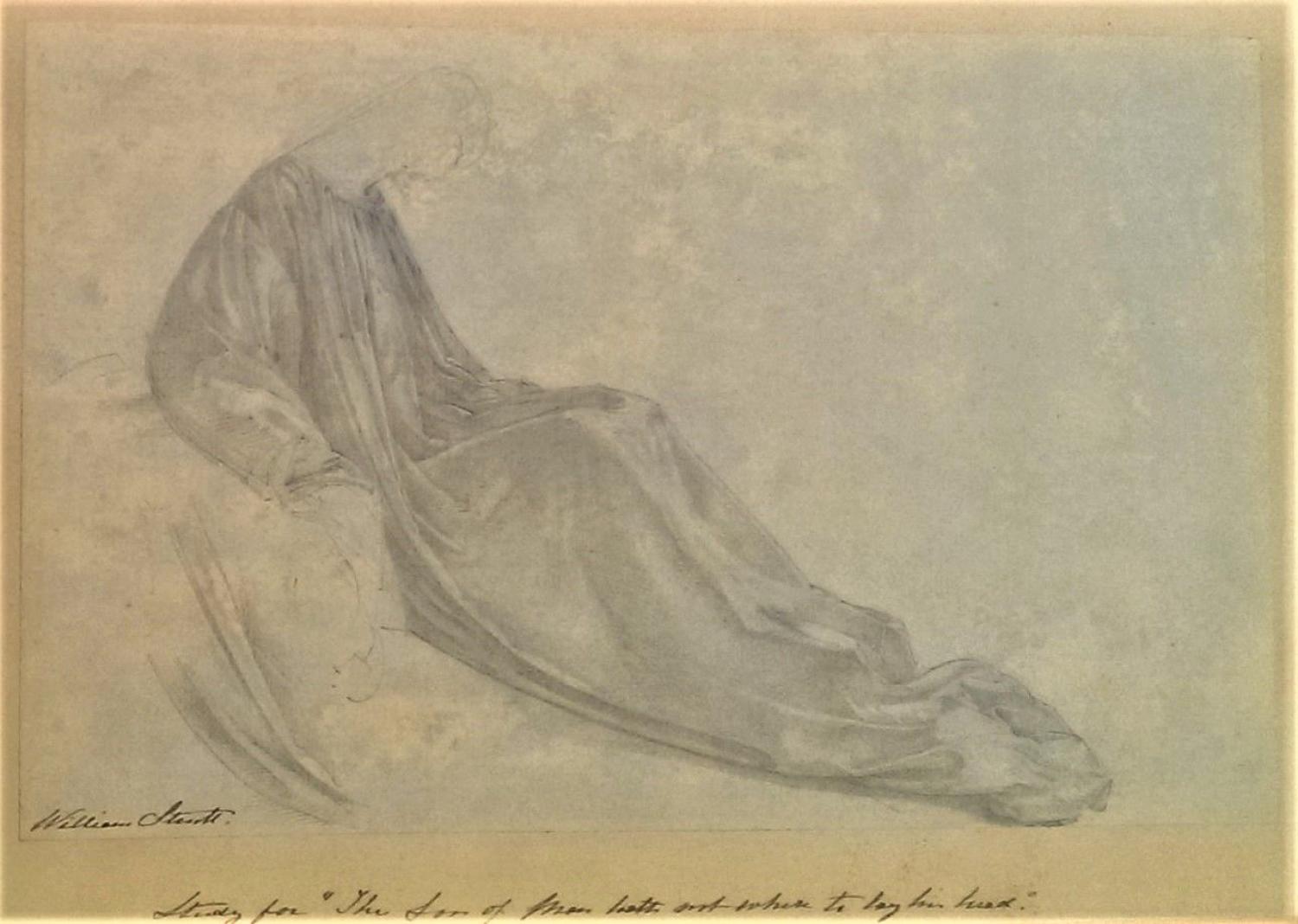 William STRUTT, R.B.A., F.Z.S. (1825–1915)
Study of drapery for "The Son of Man Hath Not Where to Lay His Head"
Pencil with ink outline and wash on prepared paper
Signed lower left with artist's inscription to lower margin of mount
320 mm x 300 mm

The present drawing is a study for one of the artist's principal religious works "The Son of Man Hath Not Where to Lay His Head" (current whereabouts unknown). The title of Strutt's painting is taken from the Biblical quotation where Christ says to one of his followers (Luke 9:58; Matthew 8:20 (King James Version)):

"Foxes have holes, and birds of the air have nests; but the Son of Man hath not where to lay his head"

William Strutt is now primarily remembered as one of the first classically-trained artists to work in Australia and New Zealand.  From a family of artists, Strutt and his brother Joseph travelled to Paris in 1838 to study under Jean-Auguste-Dominique Ingres (1780-1867) and the academic painter Michel-Martin Drolling (1786-1851). As well as life-drawing, their training included study from engravings and antique casts. Strutt remained with Drolling until 1843 but he also enrolled at the École des Beaux-Arts, where he received instruction from Paul Delaroche and Horace Vernet. In 1843-44 he became apprenticed to the portrait painter Joseph-Nicolas Jouy (1809-1880).

He emerged from these years of study "as a superb draughtsman and renderer of the human figure".1 He received 2nd prize in the École des Beaux-Arts Life Drawing Competition (though Drolling felt that his pupil should have won).2

In 1848 he returned to England to begin his practise as a professional artist but, after a period of illness, decided to try his luck in Australia, arriving in Melbourne in July 1850 at the age of 24. His time in the Antipodes is well documented (he also spent from March 1855 until July 1856 in New Zealand).  Strutt left the colony of Victoria in 1862, now with a wife and three children. It is thought that he feared, as a religious man, what might become of his family if they were raised in what he perceived to be a godless society.

Over the next forty years he revisited many of the sketches made during his time in Australia and New Zealand and worked some of these up to become the first major narrative paintings depicting historical events in these countries. He also produced a series of well-regarded religious pictures. This sketch for “The Son of Man Hath Not Where to Lay His Head” clearly shows Strutt’s academic training and his familiarity with the work of the old masters: his use of mixed-media in rendering the drapery in this sketch is evidence of his understanding of Florentine cinquecento silverpoint drawing techniques.

There has been a renewal of interest in all aspects of Strutt's work in recent years. In 2016 the State Library of Victoria, Australia organized the first major Strutt Exhibition for 30 years (“Heroes and villains: Strutt’s Australia”). In April 2019 the Archbishop of Wales, Most Revd John D.E. Davies, chose Strutt's religious picture "Peace" as his favourite painting.4

Whilst no way an Australian subject, “The Son of Man Hath Not Where to Lay His Head” may have an element of Strutt’s wishing to appeal to the colonial evangelist movement. Before Strutt had left Australia to return to England, the author Mary Therese Vidal, who had spent five years in Australia from 1840 to 1845, published "Bengala or, Some Time Ago" (John W. Parker & Son, London, 1860). In this work she writes about life in mid-Victorian Australia, speaking with sadness about hardships which could drive men to become murderous bushrangers. In particular she fictionalizes the circumstances surrounding real-life bushranger Jack Lynch (1813–1842). Vidal’s Lynch is betrayed, ambushed whilst asleep and shot dead, not having taken a life himself (in reality he was a multiple murdering, serial killer). Citing the same quotation which inspired Strutt, Vidal writes:

“For the wild dogs have got their homes, but Jack Lynch has not a stone to lay his head on”3

It is quite possible that Strutt read Vidal’s book and found the sentiment resonating with him that everyone, from Christ to an outlaw bushranger, is a victim of their circumstances. Strutt's paintings were carefully constructed and the artist made numerous preliminary sketches of each element of the work to aid with composition. There are striking similarities between the work here and the pencil and wash sketches which the artist made for the figures of the bound robbery victims seated on the ground in his work "Bushrangers on the St Kilda Road, 1852" (painted 1887) [University of Melbourne Art Collection].

1. Matthew Jones in the brochure for "Heroes and villains: Strutt’s Australia" p.4

2. See the annotation on Strutt’s École des Beaux-Arts academic drawing in the British Museum [1989,1209.20] “This figure stood No 2 at Competition. Professor Drollins [sic] said it should have been No.1."