Robert Dighton (1752-1814)
“A HERO of the TURF & his AGENT" 1806 (being portraits of the jockey Frank Buckle and the racehorse owner Harry Mellish)
Lettered with the title and the publication line: "Drawn Etch'd & Pubd by Dighton. Charg Cross. 1806."
Etching with contemporary hand-colouring
Dimensions: 27.7 cm high x 18.8 cm wide

A contemporary manuscript inscription in red ink beneath the title (lower right) identifying the subjects as "Messrs Buckle & Mellish".

This print depicts the dandy, racehorse owner and equerry to the Prince Regent Lt. Col. Henry Francis Mellish (1782-1817) standing beside the celebrated jockey Francis Buckle (1766–1832), who rode for him on a number of  occasions (including a win in the 1804 St Leger on board Mellish’s horse Sancho).  The contemporary hand colouring is correct in showing Buckle wearing silks in Mellish’s colours of white with crimson sleeves and cap.

Although now not as familiar as Byron or Beau Brummell, Mellish's name was once on everyone’s lips as one of the most flamboyant characters of the Regency era. As his obituary in The Gentleman’s Magazine put it “every part of society had known, seen, or heard of Col. Mellish.”1

Harry Mellish was a member of a wealthy banking family. His godfather was the Prince of Wales. He had inherited Blyth Hall in Yorkshire and a vast fortune at a relatively early age, his elder brother Joseph Charles Mellish (1769-1823) having been disfavoured by their father, apparently on account of extravagance and gambling.2

Having left Eton, Harry Mellish seems to have briefly attended Trinity College Cambridge, but having been entailed with the family estate may have decided education was unecessary and absconded thinking himself more suited to a military career. Still in his seventeenth year he first joined the 11th Light Dragoons, from which he transferred into the 10th Hussars (the smartest light cavalry regiment of the day, with the Prince of Wales as its Colonel). Despite being highly intelligent and having innumerable accomplishments and virtues, there is a tradition that, on reaching his majority, Mellish was granted perpetual leave so as to avoid his extravagances from corrupting other young officers. He used his wit, wealth and leisure to become a celebrated figure on the turf; acquiring a large string of horses, establishing himself as a successful match-maker and handicapper and becoming a prominent member of the Jockey Club. He won the St Leger in the two consecutive years before this print was made (with the horses Sancho in 1804 and Staveley in 1805). Mellish was also a notable patron of pugilists and arranged for Tom Cribb to fight his first bout.

An immense gambler, even by the standards of an age of great gambles, whilst playing at Hazard during one sitting at Brook's Club in London, Mellish is said to have ventured £40,000 on a single throw of the dice - and lost. He stood up to depart being down a vast total of £97,000. On his way out he encountered the Duke of Sussex who, on hearing what had happened, persuaded him to return to the tables to try his luck again. Mellish duly did so and within a few hours had won £100,000 from the Duke, who paid as much of the debt as he could and promised to settle the rest of the sum though a lifetime annuity of £4,000 a year.

Though the most popular of men, in 1807 Colonel Mellish had a serious altercation with Hon. Martin Hawke which resulted in the two men fighting a pistol duel. Hawke wounded Mellish in the arm and the incident became the subject of a caricature print by Cruikshank entitled “The Slang Duellists a shot at a Hawke or the Wounded Pigeon”. In the dialogue set out in Cruikshank’s print the two men offer odds of hitting one another and Hawke refers to Mellish as “Sancho” - a reference to his celebrated horse. After the incident the two men travelled home together as firm friends.

It is alleged that one of Mellish's final bets was whether a pat of butter would stick to the Blyth Hall dining room ceiling. He was so drunk that when he flicked the butter up with his knife it failed to reach its target and he had to sell Blyth Hall to pay the debt and moved to a smaller house at Hodsock Priory. Certainly, at the time of the outbreak of the Peninsular War, one of the periodic crises occurred in Mellish's finances which necessitated his leaving for Spain with the army. He was appointed aide-de-camp to Major-General Sir Ronald Craufurd Ferguson. Before the Battle of Vimeiro shortly after British troops arrived in Portugal in August 1808, a fellow officer observed to Sir Ronald that, if it were not impossible, he could swear that an officer he had seen in camp was a gentleman who had been in the cockpit at York only a week or two before - where he understood his name to be Mr. Mellish. "The very same man," returned Sir Ronald "he is now my aide-de-camp, and I think you will say, when you have the opportunity of knowing more of him, a better officer will not be found".3 Mellish served with distinction and, on one occassion, was captured by the enemy. On hearing of this Wellington is reported to have said: “They will not keep him long”. Mellish duly reappeared the following day riding on a donkey. A fellow officer commenting on the condition of the animal condemed it as only being worth £5. Mellish challenged the valuation, saying he would be able to get £35 for it. He proved his point by riding the animal into a mêlée where it was shot dead from under him and he received the customary £35 compensation paid by the army for the loss of a mount in battle!

While he was absent in the Peninsular his relatives set his affairs in sufficient order for him to live in reasonable comfort on his return. He was appointed an equerry to the Prince Regent. A song written by Lord Darlington (later the Duke of Cleveland) includes the verse:

Behold Harry Mellish, as wild as the wind,
On Lancaster mounted, leave numbers behind;
But lately returned from democrat France,
Where, forgetting to bet, he's been learning to dance.

Mellish was the subject of a notable millitary equestrian portrait by Ben Marshall (1767-1835). In August 1812 he married Harriet, one of the daughters of the Dowager Marchioness of Landsdowne, who brought with her considerable wealth. He seems to have become a reformed character, taming his gambling to concentrate on breeding prize winning cattle in Yorkshire. However, "the flame of his mind... was too ardent not to consume itself, and to burn the lamp which contained it"4. He died without heir at the age of 37.

Francis Buckle (1766–1832), known as “The Governor”, was celebrated for his honesty and decency in racing circles. During his career he won 27 Classics – a total which was only surpassed by Leicester Piggott in 1984. Buckle was apprenticed to Sam Chifney and from him he learnt the merits of a distinctive "late-rush" finish. At the closing stages of the 1804 St. Leger at Doncaster, so confident was Buckle on board Mellish's Sancho that he had the rest of the field beaten, he was able to signal as such by raising his wip to the horse's owner in the stands. On seeing this Mellish didn't wait to see Sancho pass the post but rushed down to the betting ring to start collecting his winnings.

Dighton's caricature captures much of the character of the two men. The title for the print has a clever ambiguity woven within it: is it actually the famously profligate plunger who is to be admired as a "hero of the turf" with the jockey being merely "his agent"?

1. P.275 The Gentleman’s Magazine, September, 1817
2. Despite the apparent profligacy of the older brother, Joseph, he completed his education at Eton and Trinity College, Cambridge and was called to the bar at Lincoln's Inn in 1787. An accomplished linguist, he travelled to the continent where he became a friend and confidant of Goethe and Schiller, translating their works into English. Joseph Mellish had a striking house built for himself in Weimar, which was untimately bought by Schiller as is now known as the Schillerhaus. He served as British Consul at Palermo in 1808, Louisiana in 1809 and Hamburg from 1814-23. He married a German heiress, Caroline Ernestine Frederica Sophia Freiin von Stein-Nordheim (1777-1824), and they had several children.
3. p.426 of Pierce Egan, "Sporting Anecdotes, Original & Selected: Including Numerous Characteristic Potrtraits of Persons in Every Walk of Life Who Have Acquired Notoriety..."; Sherwood, Neely & Jones; London, 1820
4. p.277 The Gentleman’s Magazine, September, 1817

Condition
Good general condition. Toning consitent with age. Trimmed to the platemark and currently framed close to the image. Suggestion of a crease to the middle of the image. Some fading to the hand-colouring. With regards to the manuscript inscription in red ink identifying the subject, there is a general consensus that so consistent is the handwriting and the coloured ink in these early inscriptions that they were almost certainly added by members of the Dighton family before images were retailed. 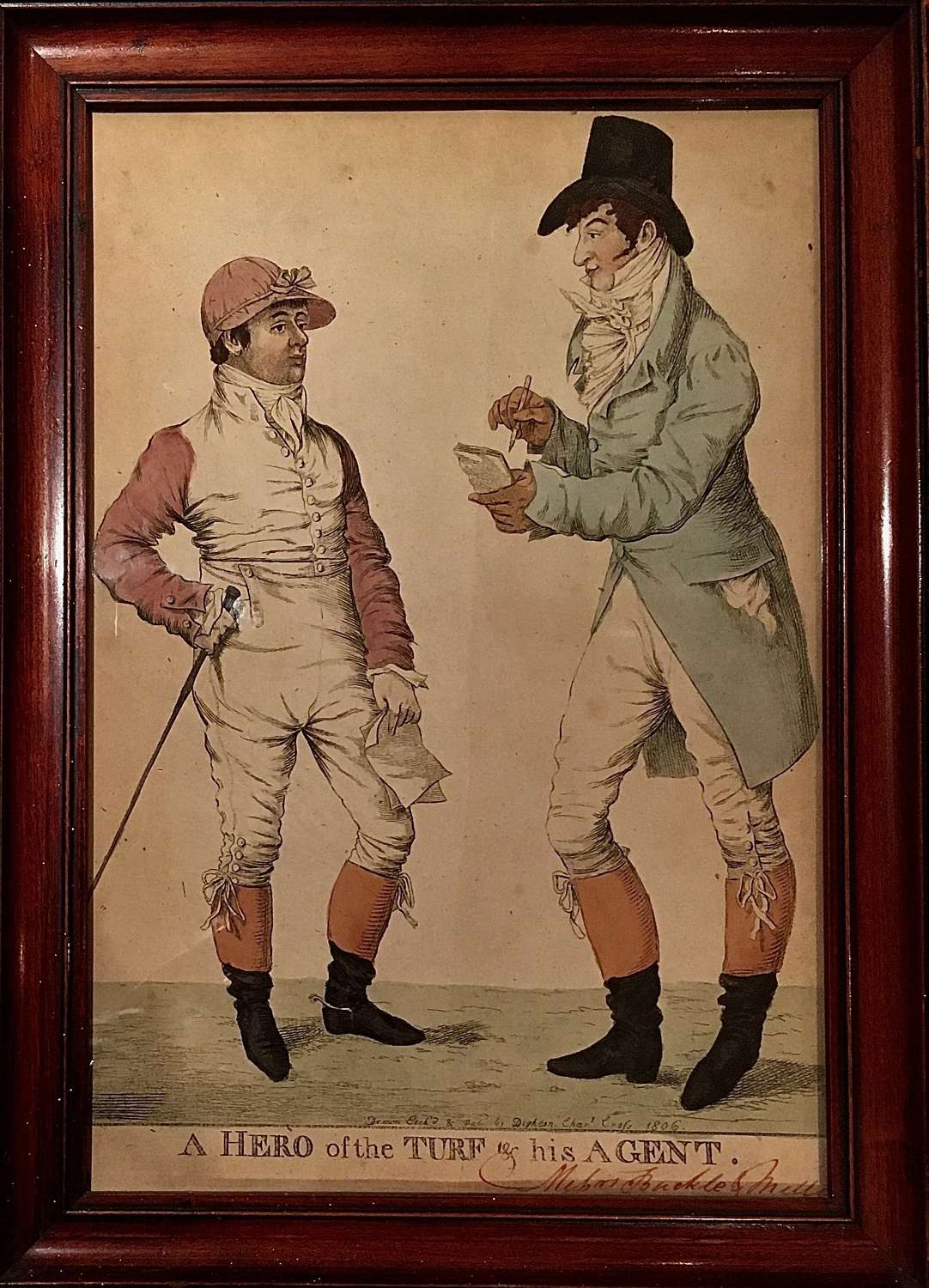