The view here is almost certainly that of Wittenham Clumps/The Sinodun Hills seen from the eastern bank of the River Thames near Days Lock at Dorchester on Thames in Oxfordshire. At this point, as the crow flies, the ancient hill fort of Wittenham Clumps is only about one mile from Dorchester. The picture is dated to 1911 on stylistic grounds and also in the knowledge that Rich painted a work entitled "The Thames, Shillingford" (see TATE T08216 (formerly in the collection of Paul Oppé)) which is close-by to the view here and which was exhibited in the New English Art Club's Summer 1911 exhibition as Catalogue No. 6*.

The artist has used his typical palette of muted tones, for which he was so much celebrated in his lifetime, the colours used being a homage to the old masters of English watercolours and specifically chosen to emphasise his emotional response to the earthy English landscape. Of Shillingford and Dorchester Rich wrote:

Shillingford is about ten miles from Oxford, and quite near Dorchester, with its most interesting church. The low-lying hills, which here hug the river, help to give a great charm and additional interest can always be found in the passing barges and their occupants.[1]

The date of this work is particularly fascinating as it around this exact time that Paul Nash (1889–1946), whilst still a pupil at the Slade, drew Wittenham Clumps (which would become a recurring motif in his work) for the first time. It is very possible that Rich, who was a tutor at the Slade, was painting with a group of his students, who would all have known Nash, when this picture was produced.

For Rich the "idea" of a picture was always of paramount importance. He emphasised to his pupils how art was not simply about reproducing a scene. Therefore, in addition to being a view of this stretch of the Thames the work has, as is so often the case with Rich's pictures, a deeper meaning - the passage of time is being observed from the viewpoint of the present. The viewer stands in the present looking towards the distant past (represented by the ancient historical landscape of the Iron Age hill fort of Wittenham Clumps), in the foreground winds a river (so frequently used as a metaphor for time). To reach the past the viewer has to cross to the Styx-like river Thames before them. Perhaps Charon (the mythological ferryman who takes souls across to Hades) is waiting in the barge seen on the left? Whatever, the vessel with its low draught, highly distinctive mast formation, red ochre sails and green awning or wheel shelter canopy is, unmistakably, an accurately portrayed Thames sailing barge. In this detail there is a further expression of the passing of time: the opening of the Great Western Railway (which runs nearby) in the mid-19th Century and the incorporation of the Thames and Isis Steamboat Company in the 1870's had both dramatically altered transport on this stretch of the river. By the time this picture was painted, the old working sail barges were in terminal decline. The artist would have known that it would not be long before they finally vanished from the river. He was, therefore, also recording the last vestiges of the pre-industrial era.

The exact viewpoint has not yet been identified as the river here meanders and has almost no public footpath access where it divides between its old course and the present navigable route. However, a photograph taken in 2021 shows a similar aspect of Wittenham Clumps viewed from near the ancient site of the Dyke Hills, Dorchester. 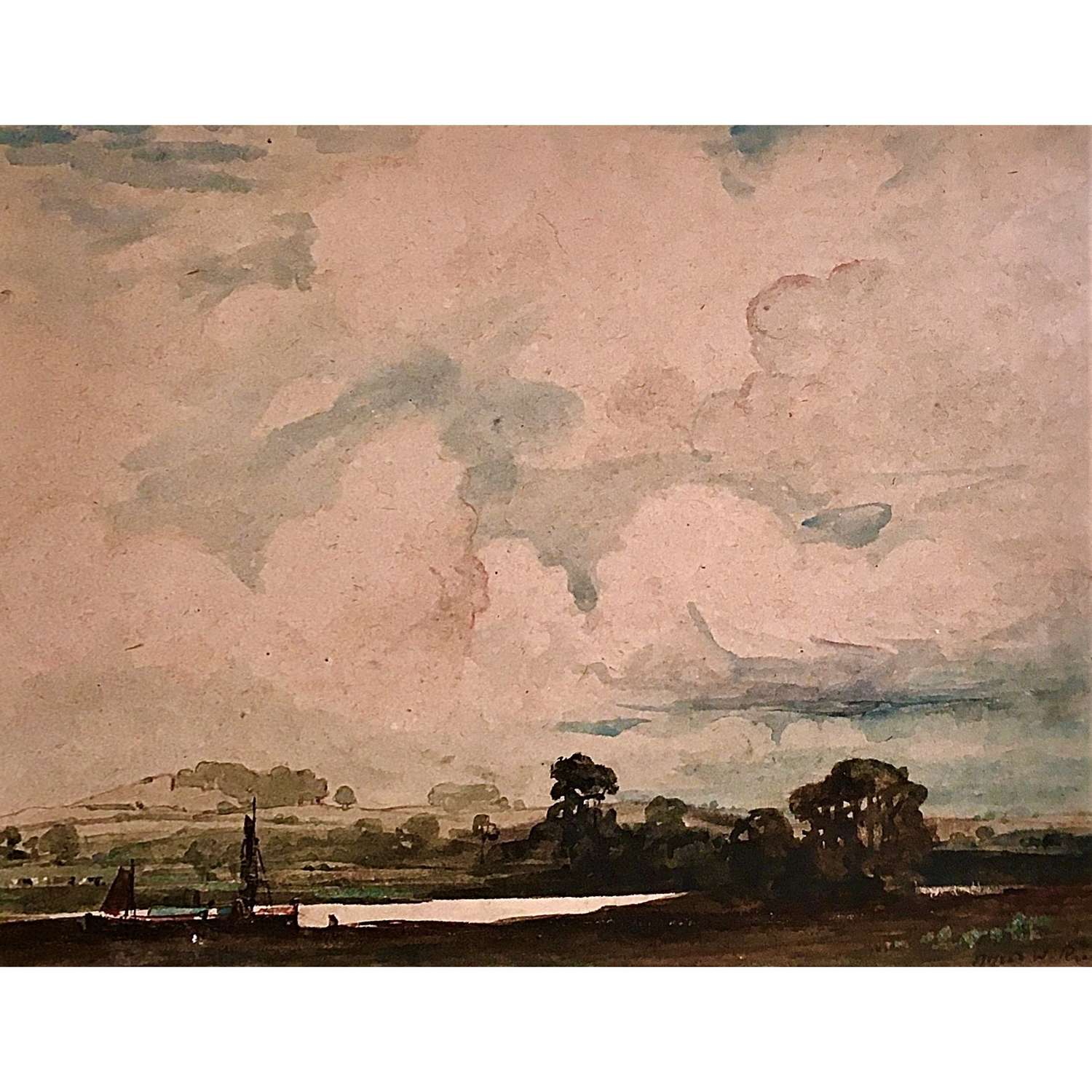 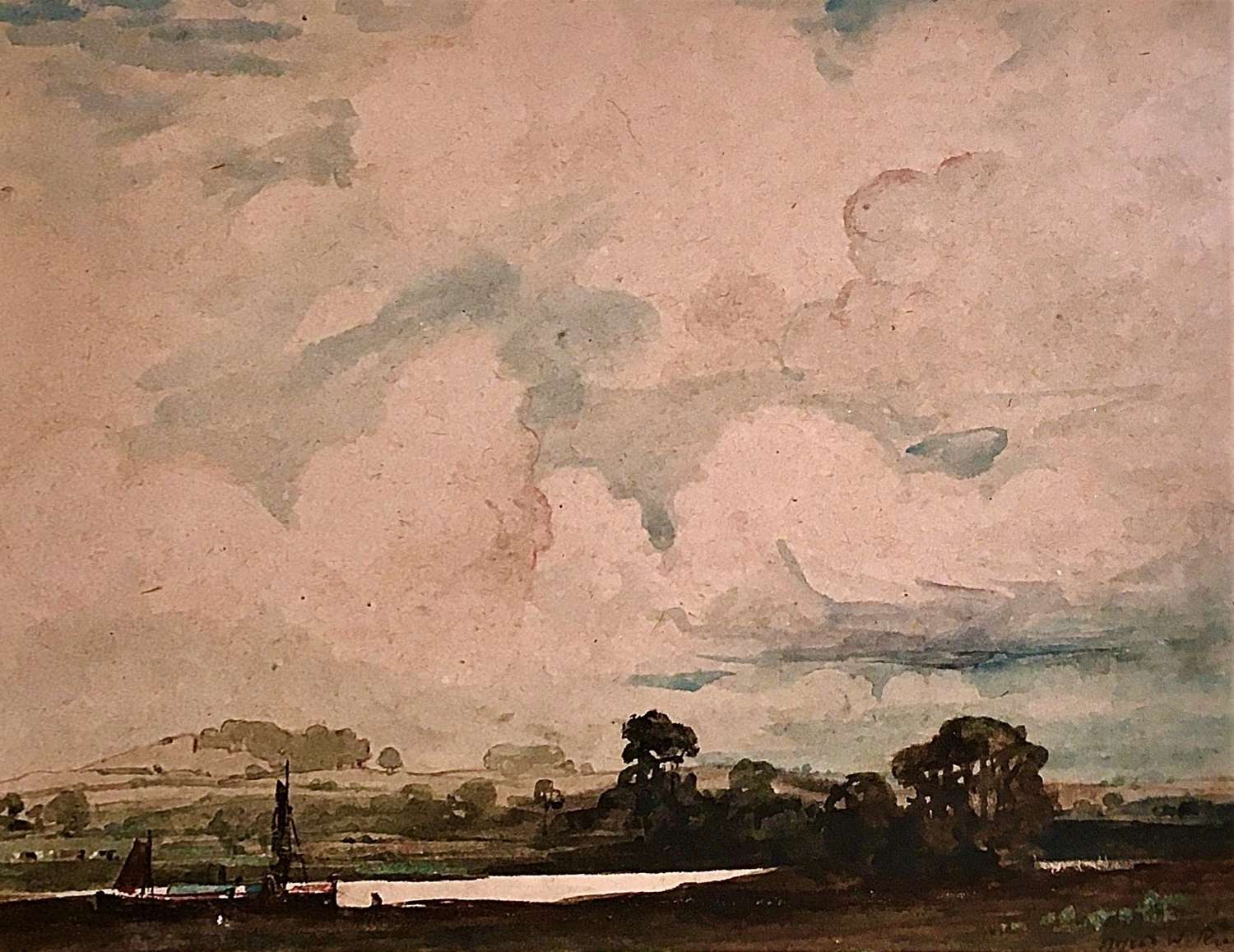 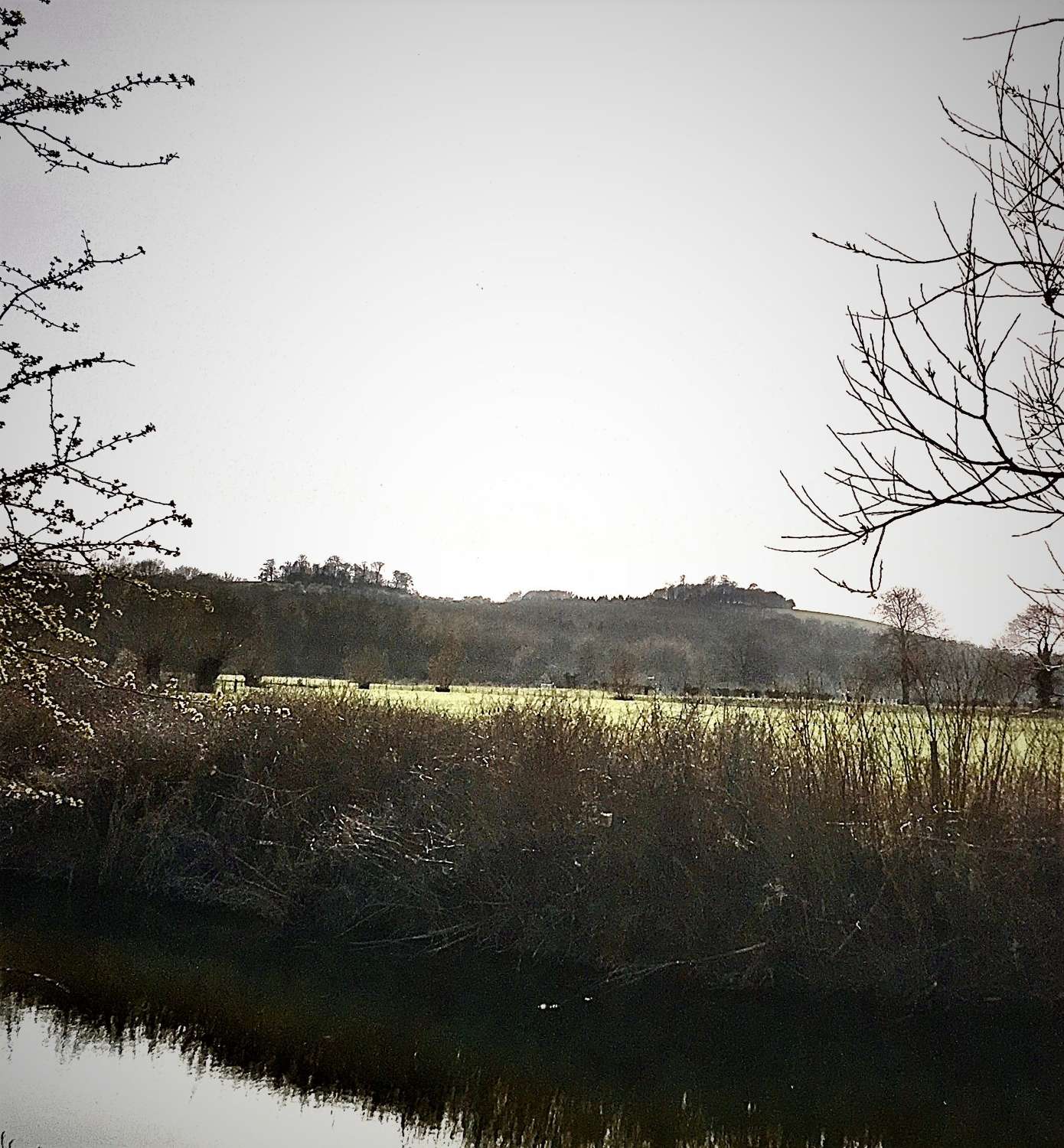