A stoneware baluster jug with moulded decoration highlighted with cobalt-blue glaze; the main body with an arched colonnade frieze, the columns framing heraldic escutcheons, portraits of figures in medieval costume with ruffs behind each; the neck with a scrolling frieze terminating in two oval portrait medallions, to the centre a cartouche with "LVCAS DE WAELA / 159(1)"; various other bands of decoration, semi-circular rosettes etc; tapers to a foot-ring; strap handle.

The decorative arches on this jug frame the portraits and coats of arms of each of the seven "Prince Electors" (three spiritual and four secular), vested with the authority of choosing the Holy Roman Emperor.These are (left to right): the Duke of Saxony; the Margrave of Brandenburg; Archbishop of Trèves (Trier); the Archbishop of Mainz; the King of Bohemia; Count Palatine of the Rhine; the Archbishop of Cologne (beneath the handle).

Jugs which display symbols, crests and images of the seven Prince-Electors of the Holy Roman Empire appear in various forms. The development of "Princely Taste" among wealthy connoisseur-collectors at the end of the 19th Century ensured that there was a market for copies of the scarce earlier jugs. This type of pottery with its ornate mouldings and surface decoration with contrasting glazes was also clearly an inspiration to and influence on the art-pottery made by Doulton's at Lambeth in London.

Although bearing the name "Lucas De Waela" and the date "1591" the jug here is probably 19th Century. It may have been created to commemorate the tercentenary of the birth of the Flemish artist, pottery retailer and influential early art dealer Lucas de Wael (1591-1661) and was probably made in the vicinity of Höhr-Grenzhausen in the Westerwaldkreis of the Rhineland.

For very similar but early jugs with the brown glaze associated with Raeren (Liège) in the southern Netherlands (modern Belgium) and dated 1602 see Philadelphia Museum of Art 2002-176-1 (Purchased with the John D. McIlhenny Fund) and Rijksmuseum, Amsterdam BK-NM-9242.  For a similar earlier jug in Westerwald style, dated to the 16th Century, see British Museum 1887,0211.13 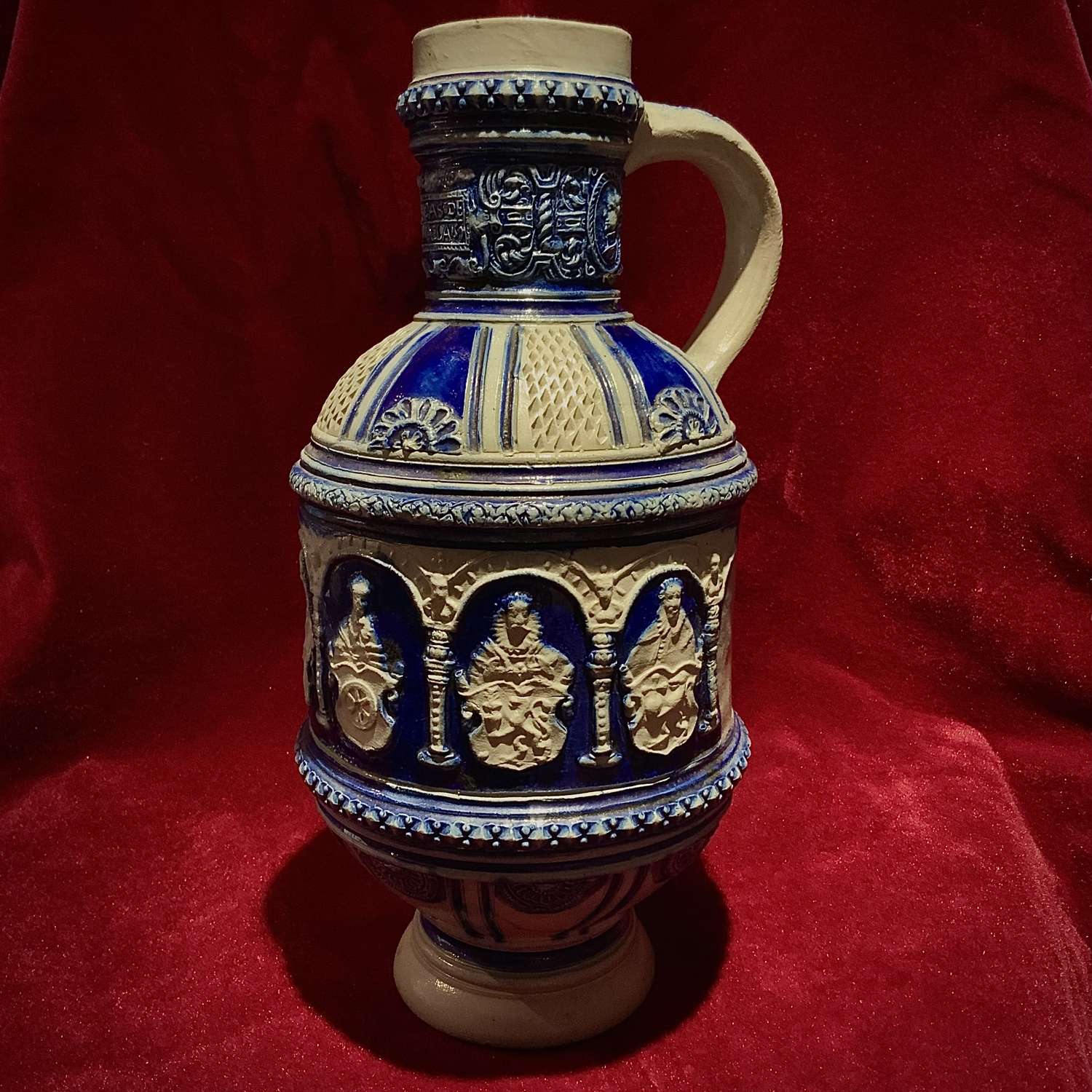 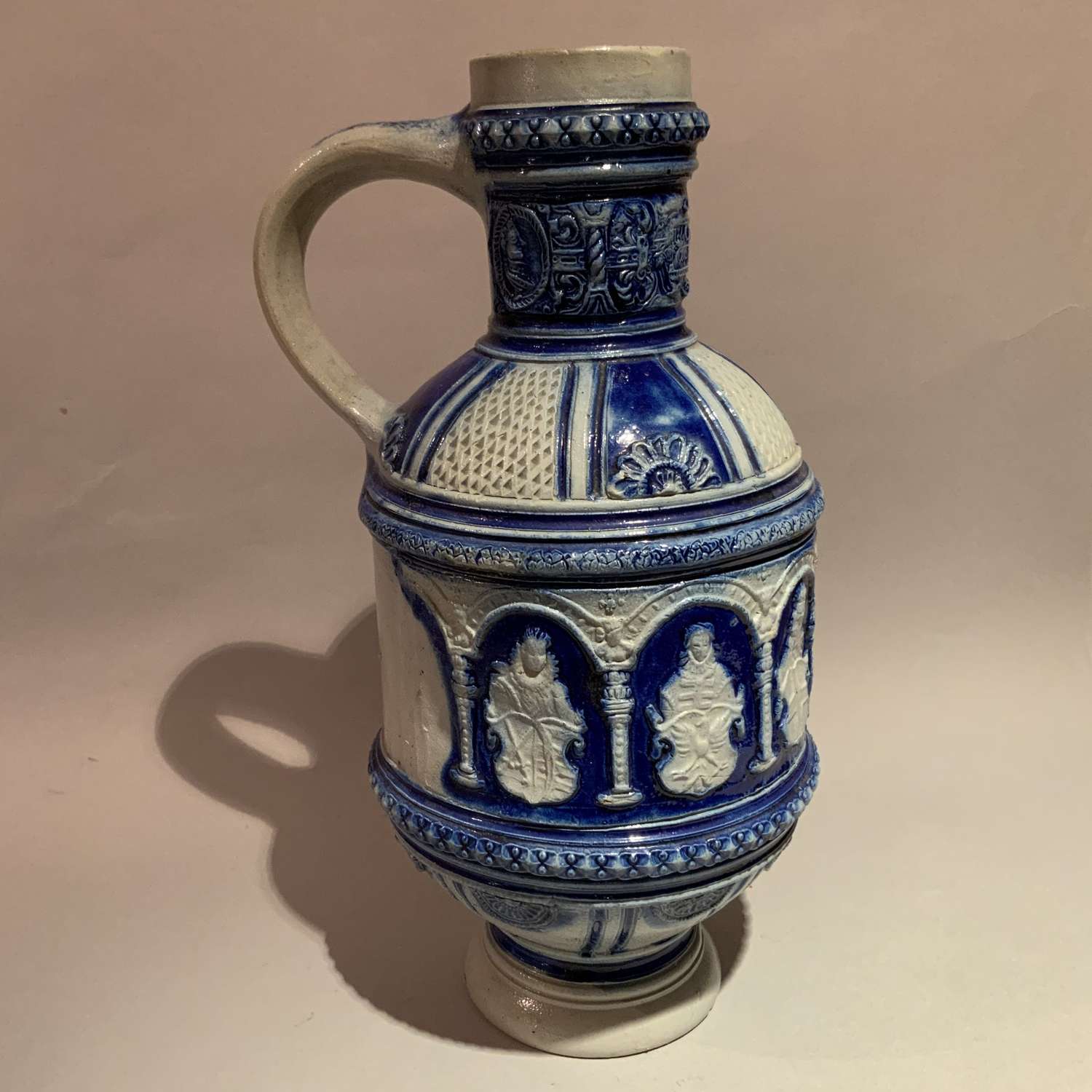 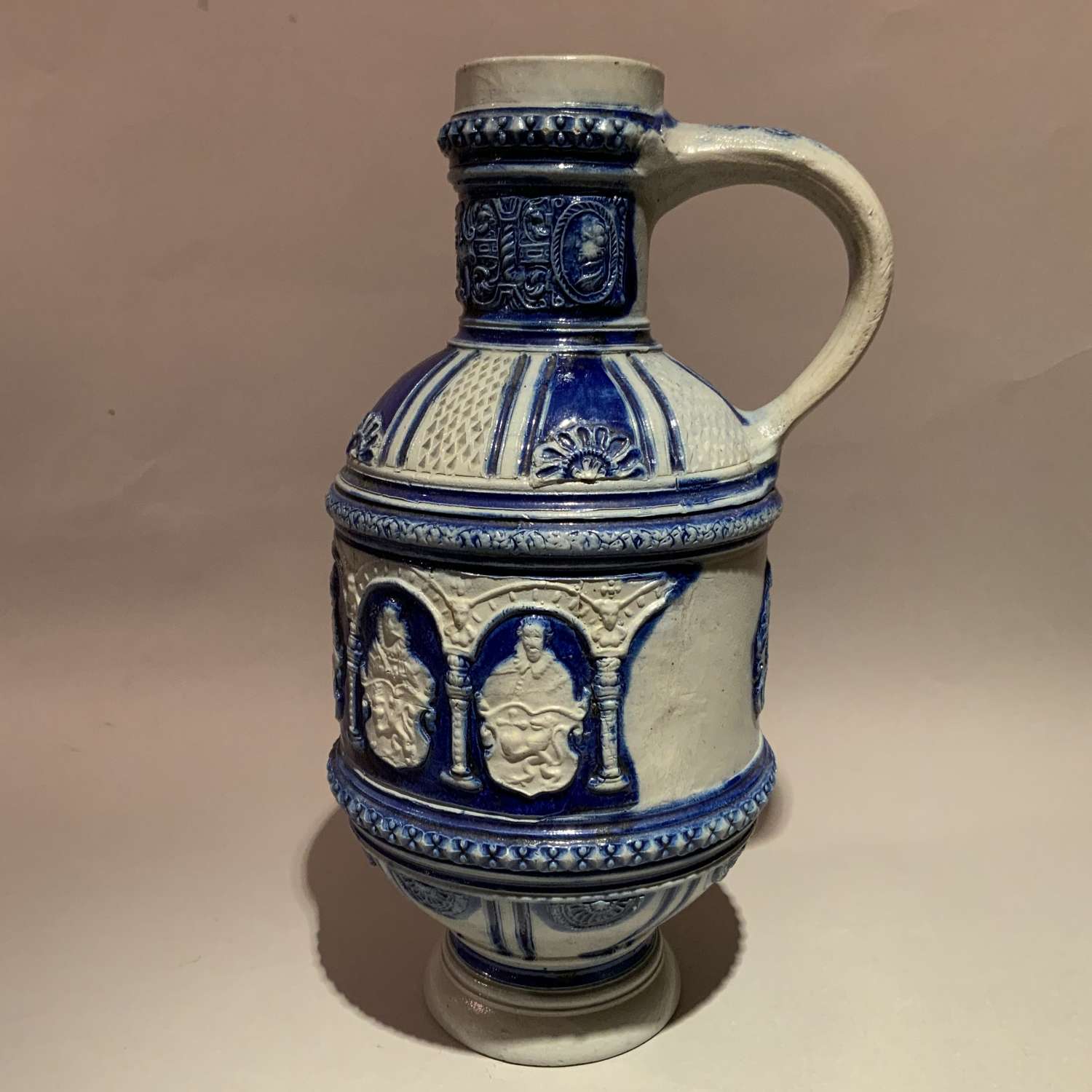 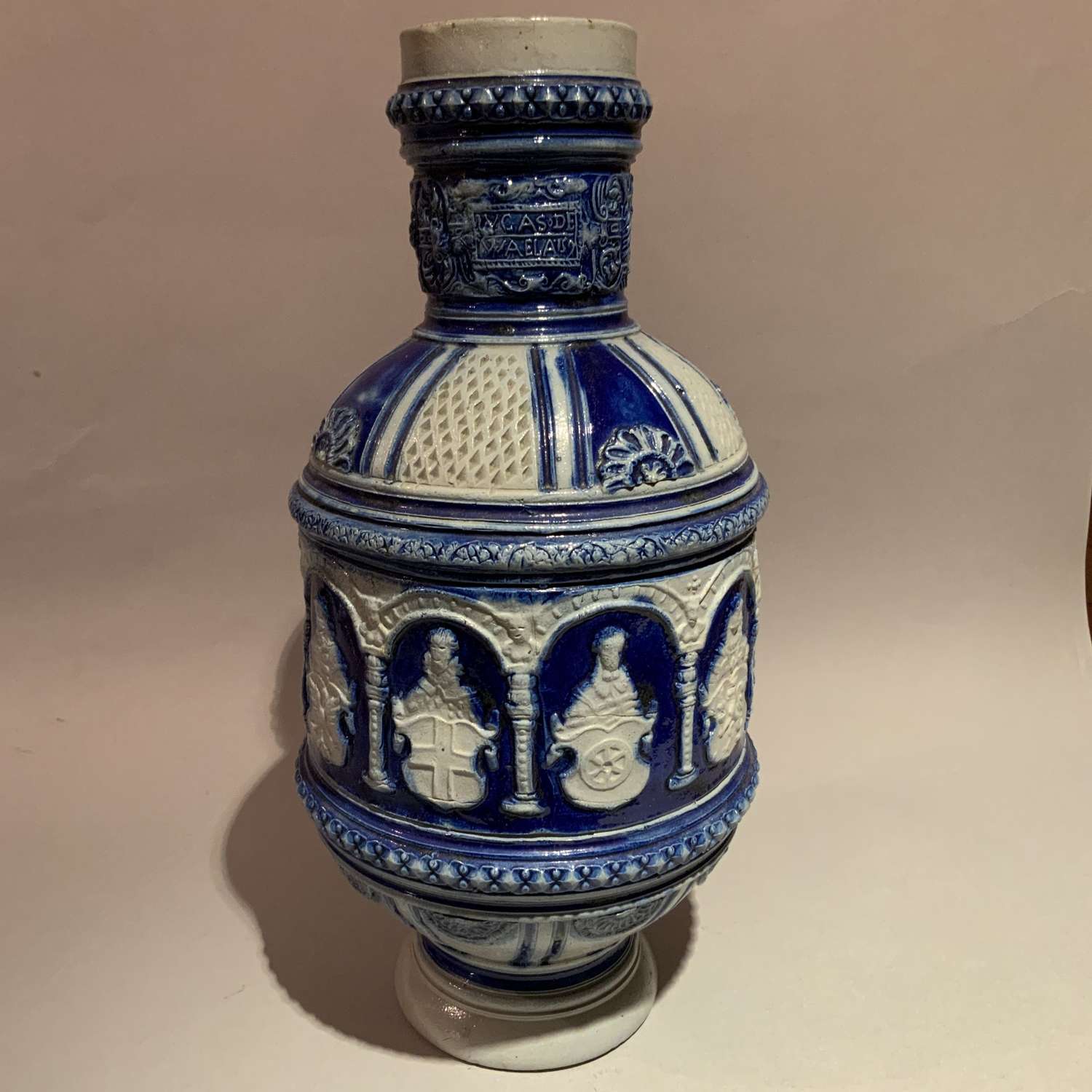 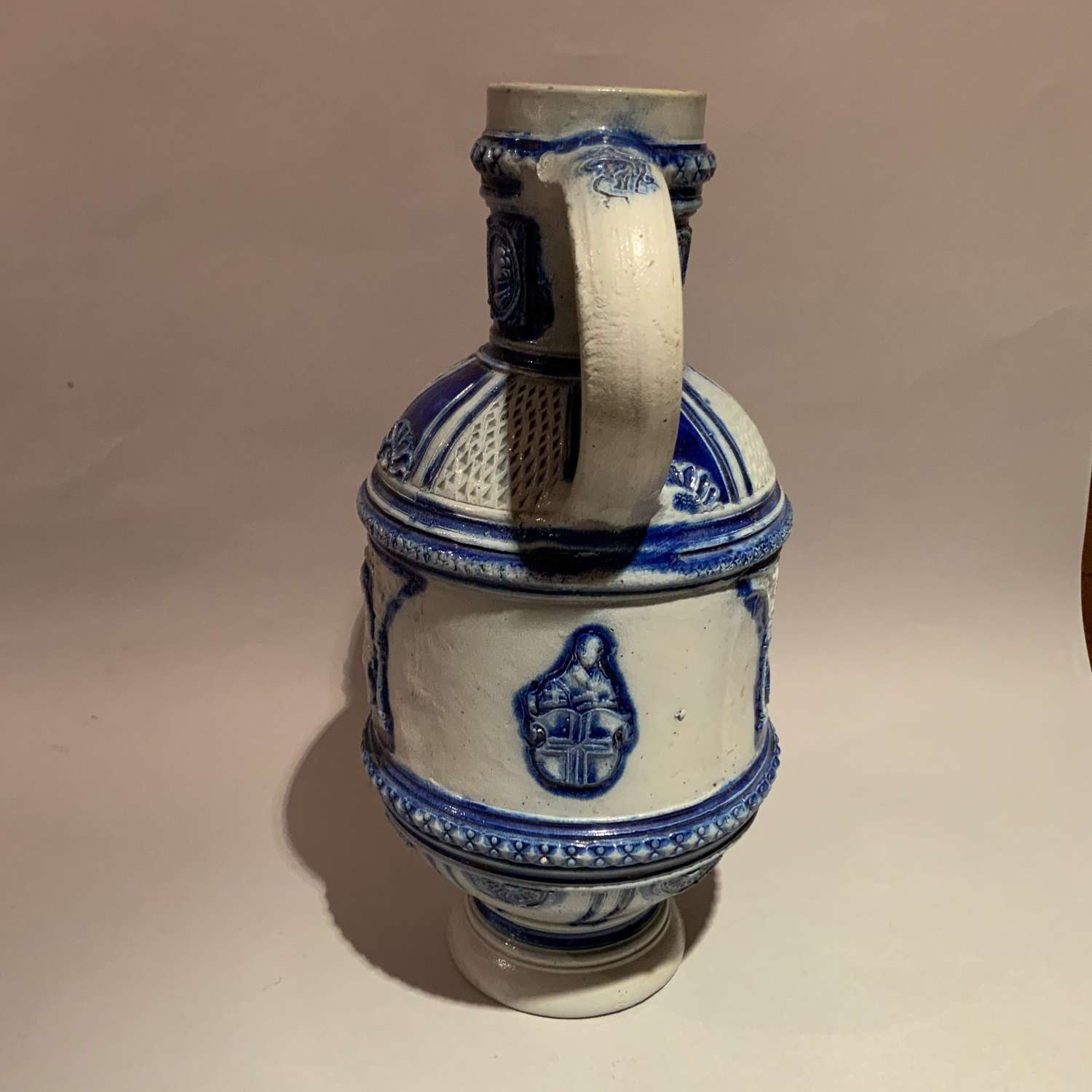 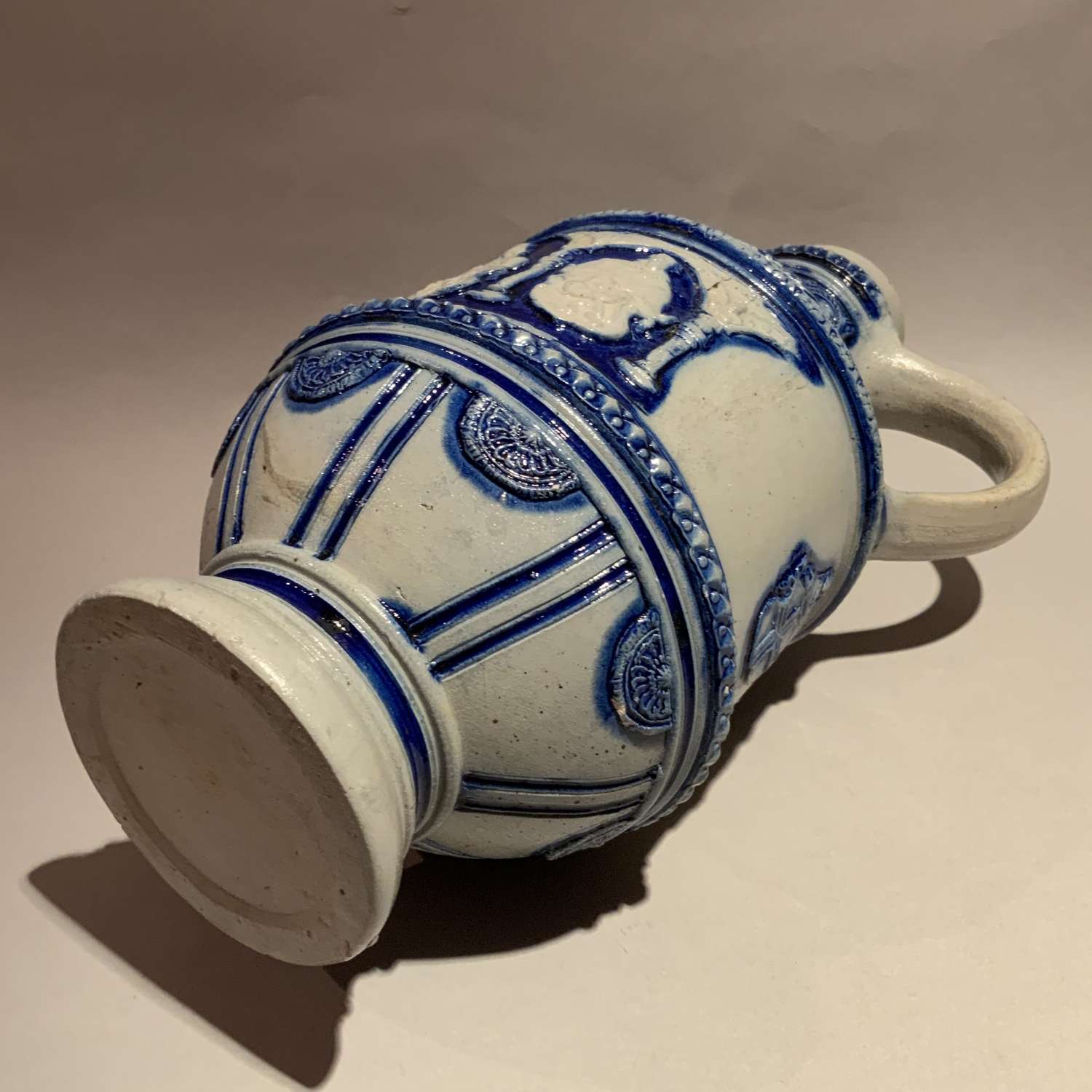